Just got word the new Amish population stats are up on the Young Center Amish Studies web site.

The big shocker is Pennsylvania coming in ahead of the Ohio Amish, and Lancaster County a hair ahead of Holmes County (by 25 people, which means that if Holmes County delivers more babies this week, they could retake the lead!) With the numbers at around 29,000 each, they could basically be considered the same size.

However, Holmes County has traditionally been considered significantly larger than Lancaster in previous Amish population estimates. 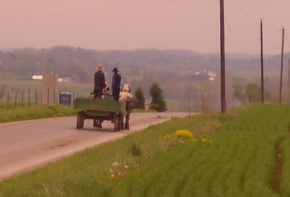 Does Ohio have a response?

So even though Holmes County has 227 districts to Lancaster’s 179, the average church membership of 165 in Lancaster vs. 130 in Holmes puts Lancaster over the top.  It’s nice that the Young Center used the more specific numbers, as district averages can vary from settlement to settlement.

The other neat bit of news is that Amish have added a new state to the tally–South Dakota.

A group of six families settling in the southeastern part of the state means that at present Amish live in 28 states and the province of Ontario.