When you mention “Amish”, most people don’t think of the South.  Yet for over 60 years, a flourishing Amish settlement has existed just an hour-and-a-half outside of Nashville.

The Amish settlement at Ethridge, Tennessee is home to a population of roughly 1,500 Amish.  This community was founded in 1944 by Amish from an extinct settlement at Lumberton, Mississippi, as well as Amish from Wayne County in Ohio. 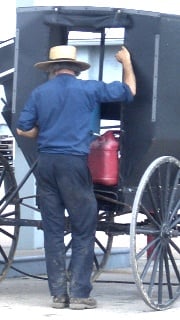 An Amishman fills up at a station near Ethridge, TN

Like other Swartzentruber Amish, the Amish at Ethridge do not use the Slow-Moving Vehicle triangle, meaning extra caution is required while on the road.  Homes are extremely plain, as is the clothing worn by individuals in this settlement.

Dairy and produce farming are common ways of making a living for Amish in the Ethridge settlement.  Amish run numerous businesses in the area too, often selling products direct from home.

An important part of the local economy is the produce auction which takes place 3 times a week in the growing season (April-October).  Local Amish produce growers bring their goods for sale.  Among others, Amish sell peppers, tomatoes, corn, cantaloupes, strawberries, and many other vegetables and fruits. 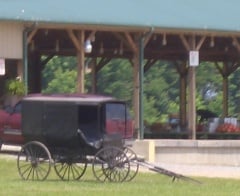 Additionally, public interest in “all-natural” and organic products help drive this market.  Amish may run a produce business on the side, or even make a full-time living at it.

Tourism in the Ethridge TN settlement

As one of the oldest and largest Amish settlements in the South, Ethridge features a fairly well-developed tourist industry.  An “Amish Welcome Center” provides visitors with a map of the area, with Amish businesses and the products they sell clearly marked. 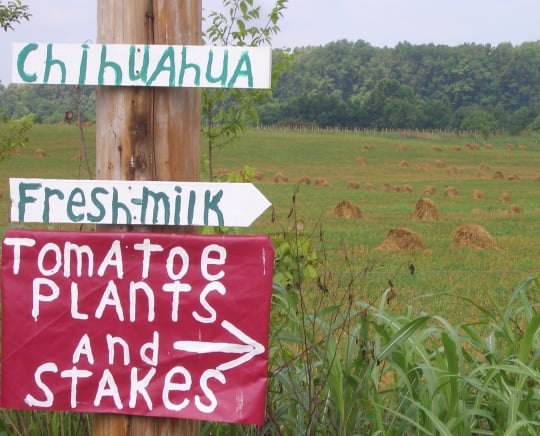 Amish business signs in Ethridge, TN. Chihuahuas not for consumption

Amish indirectly participate in the tourist industry as well.  Some Amish sell products directly from locations at the English-run tourist-themed businesses.  Others receive tour visitors who buy their products direct from home or from an adjacent shop on the property.

In addition to the community at Ethridge TN, Amish have also settled in other parts of Tennessee.  Small Amish settlements can be found at five locations in Tennessee, including at Huntington and Bruceton in Carroll County (founded 1975), McKenzie (1998), and Summertown (2000).  As of 2010, all of these settlements are comprised of no more than one or two church districts.

In addition to the present-day communities, Tennessee has a history of settlements that failed as well.  Before the landmark Supreme Court decision of Wisconsin vs. Yoder granted Amish the right to remove their children from school after grade 8, Amish often came into conflict with state authorities over the issue of schooling. 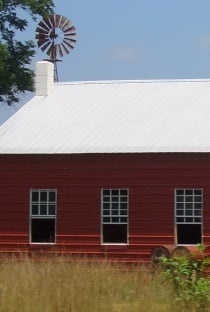 Frequently, Amish would move to states where authorities were more accommodating.  Such was the case with the community that once existed at Hohenwald, in Lewis County.

The Hohenwald settlement was founded by Amish from the Swiss Amish settlement at Adams County in Indiana (Swiss Amish are a different ethnic group within Amish society).

Amish from this community chose land in Lewis County, near to the young settlement at Ethridge, which had also recently been established by Amish motivated for reasons of schooling.

Amish began moving to Hohenwald in 1947, but the settlement failed to attract many settlers, and never grew larger than eleven families.  However, at least one interesting story emerged from this little-known TN settlement, when one Amish immigrant, Rudy Wickey, chose a particularly unusual means of making the 550-mile trip to Tennessee.

Rudy Wickey goes by covered wagon from Ohio to Tennessee

Rudy Wickey was an Amishman living in Wayne County, Ohio.  Wickey decided to make the trek to join the settlers in Tennessee by covered wagon pulled by two work horses and a pony.  Accompanying him were his wife and five children.  Wickey left for Tennessee in late 1947.  “Little did they realize,” writes Amish historian David Luthy, “that their pictures would be in newspapers across America” (Settlements that Failed, Luthy, p450). 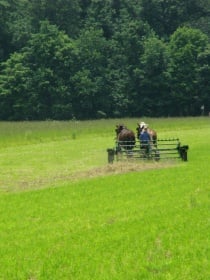 A Tennessee Amish farmer working in the fields

Wickey was stopped by authorities before leaving Holmes County, due to the overloaded condition of the Amishman’s wagon.  Wickey’s wife and children continued on to Tennessee by train, but the Amishman was determined to make the journey by covered wagon.

Luthy reports that Wickey’s picture was taken by newspaper photographers, and that “The Associated Press wire service picked up his story and announced to all America when he had reached his destination, quoting Wickey as having said that he was “happy to be in Tennessee where the people are more lenient toward those of our faith” (Settlements that Failed, Luthy, p 451).

Amish in this corner of Tennessee made a living by raising a variety of crops, including strawberries and tomatoes, and also cut and sold lumber.  Eventually, church ministry moved away from the community.  The last families at the Hohenwald TN settlement relocated in 1955.

A settlement of Amish once existed in the Volunteer State at Dickson County.  This settlement was founded by Amish from Daviess County, Indiana, who settled here in 1890. 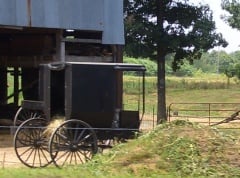 A buggy parked outside a barn in the Ethridge TN settlement

David Luthy reports that Amish settlers to the area encountered “rough locals”, with an affinity for moonshine and fighting.   One such fight resulted in a gun and knife battle which left two dead.  Shortly thereafter, some people attempted to set the county seat of Dickson ablaze, destroying 28 buildings.

Other challenges included the climate, which alternated from very wet to very dry.  Farming was difficult as a result.  Farmers raised corn, oats, wheat and hay, and also fruit.  One family operated a sawmill.  Eventually, the challenges of farming, combined with the Panic of 1893 financial depression caused the Dickson County settlers to migrate to more favorable Amish communities, with the last family likely leaving in 1899.

Amish are currently found in a total of four settlements in the Volunteer State.  Ethridge is by far the largest and best-known.  Ethridge has also spawned daughter settlements in both Tennessee and Kentucky.  The total population of Amish in Tennessee is approximately 2,100 as of 2010, spread over 6 settlements and 17 church districts.

The Amish of Tennessee have appeared on the Amish America blog  a number of times.  The Ethridge Amish community was featured in a post from summer 2010, as was the Ethridge produce auction.  The ‘Para-Amish’ church at Lobelville, Tennessee was mentioned in a post on Amish diversity.

Here you can also see all posts tagged “Tennessee Amish“.