A handful of Amish make their homes in Virginia

Virginia has seen some Amish settlement over the years, with a few communities in the early 20th century. 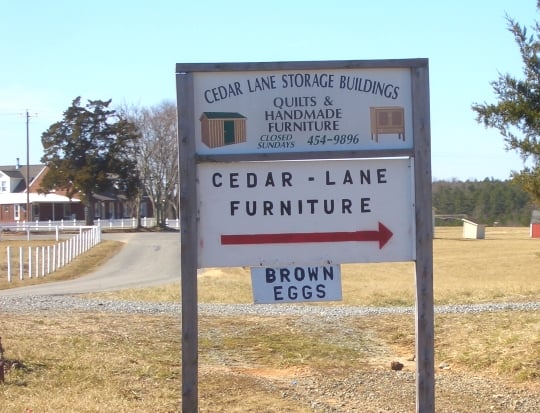 The oldest Amish community in Virginia is found in Giles County near the town of Pearisburg, founded in 1993. Giles County is a mountainous county lying in the Appalachian range of southwest Virginia. As of 2008, this settlement consisted of 2 church districts but has since declined to 1.

Charlotte County saw its first Amish arrivals a few years after Pearisburg, in 1997. The Charlotte County VA Amish group has Lancaster County roots, and likewise drives the recognizable charcoal grey-topped buggies. The community is located outside the county seat of Charlotte Court House. 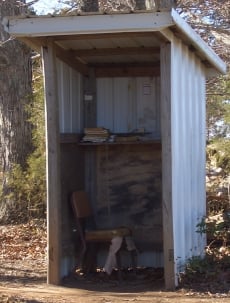 Telephone shanty in the Amish community in Charlotte County, Virginia

Amish families in Charlotte County operate small businesses, including at least one sawmill, along with dairy farms. Homes and farms are sparsely scattered about the hills and rolling terrain of Charlotte County. Unless you are looking for them, it is difficult to notice that there is an Amish settlement here.

The Amish in Halifax County VA originate from a different community than the Charlotte County group. In 2005, families began moving here from the Amish settlement at Dover, Delaware.

Similar to Lancaster County, the Dover settlement has experienced significant land pressures due to the nearby city of Dover and its expanding population. The Delaware Amish settlement has lost significant numbers of Amish, with roughly 50 families leaving the community for a total of 16 states in 2010. One of those destinations is the small Halifax County community.

The Halifax County Amish were just a small group as of 2011. A handful of homes, perhaps no more than a dozen households comprise this community of one congregation.

Judging by the look of the homes and land, the area has a more prosperous appearance than the one at Charlotte County, which are a plainer group. This likely reflects the fact that land prices in that area of Delaware have been quite high and those Amish who have sold and moved likely made out well.

Among the Halifax County Amish you’ll also find a number of entrepreneurs, including a shed builder, hickory rocker maker, a furniture business (read more about VA Amish furniture), and quilts.

As of 2008, a fourth Virginia Amish settlement was found in Lee County, near the towns of Rose Hill and Jonesville.

A handful of Amish settlements existed in VA beginning in the late 1800s up to the mid-20th century.

Amish ahead. Buggy signs are a rare sight in Virginia

The settlement at Midland in Fauquier County, founded 1892, lay in close proximity to Washington DC, about 50 miles away. Thanks to a railway line that ran through the settlement, the Amish here were able to market their dairy and produce in Washington.

Historian David Luthy reports they also took “excursions”, paying an 80-cent round-trip fare to travel into the city to view the historical sites.

This settlement grew fairly quickly, with at least 27 different households here over it’s near-decade in existence, but went extinct quickly as well, for unexplained reasons. By 1901, the last Amish had left (The Amish in America: Settlements that Failed 1840-1960, David Luthy pp. 471-475).

A “coastal” Amish settlement was found near Kempsville, in Princess Anne County. This community lay near Norfolk, were the Amish did business and sold products such as sausage and produce, and was referred to by the name of that city. A train connected this community with Virginia Beach, allowing the Amish ample chances to visit the ocean.

This community grew slowly and in close proximity to a more progressive Amish-Mennonite group. Most Amish in this community were dairy farmers, and grew oats, wheat, and corn, as well as crops of clover.

The Norfolk community adopted tractors in the 1910s, and eventually electricity, with the tractor becoming a means of road transport. Since many of the settlers originated in Somerset County, PA, which had meetinghouses, they were soon built in Princess Anne County as well. 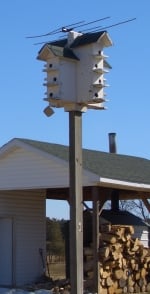 Eventually, most members of this community pushed for acceptance of the automobile. Some of the church leadership and a minority of the members in turn moved to form a community at Stuarts Draft in the Shenandoah Valley. Those remaining affiliated with the Beachy Amish. Due to urbanization from Norfolk and Virginia Beach, most traces of Amish settlement in Princess Anne County have been eradicated (Settlements that Failed, pp. 475-483)

The Stuarts Draft settlement founded by the Norfolk group lasted from 1942 until 1981, when it disbanded. Some families in this community also joined the Beachy Amish movement, with others moving to Tennessee (see GAMEO, “Virginia (USA)” ).

Other failed Virginia Amish settlements include a community at Portsmouth, lasting from 1927 to 1945 (Settlements that Failed, pp. 483-486).

More Mennonites than Amish in VA

While Amish have made attempts to settle in Virginia dating back to the late 1800s, today’s Virginia Amish population remains low.