The Cornhusker State was first settled by Amish in 1880.

Settlement since then has been sporadic and sparse, with just a handful of Amish living in the state today (for the ultraconservative Pennsylvania group also known as “Nebraska Amish”, go here). 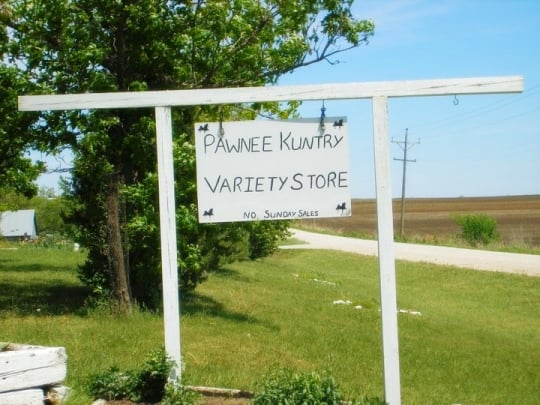 Amish are found in two locations in Nebraska: near the towns of Ewing and Orchard in Antelope County, and near Pawnee City in Pawnee County.

The Antelope County settlement was started in 2005 by Amish from Wisconsin, attracted to the area by its sparse population and cheaper farmland.  “The tar road not far from us had a steady stream of traffic all day long,” explained one of the first settlers, in an article on the community.  “We were looking for a place with less people.”


Amish in Antelope County farm and supplement their income in other ways, including by making quilts and raising animals (“Amish family finds peace and quiet in Nebraska”, Lisa Wuebben, Omaha World-Herald, August 8, 2010).  The community was one church district in size as of 2011 (read more about Amish furniture in Nebraska).

Amish had previously lived in the area, before leaving in the early 1980s, due to restrictive laws over schooling (“Old Ways Return to Pawnee City; Amish Moving Back In”, Paul Hammel, Omaha World-Herald, April 19, 2008).  The Pawnee City community is also a single congregation in size.

The Verdigre area (Knox County) was home to another Amish settlement founded by Amish from Michigan in 2003.  The pioneer couple, Eddie and Mattie Petersheim, were profiled in a newspaper article shortly after arriving in Nebraska.  The Petersheims sought land in a less-populated area, as their home community of Marlette, Michigan, had experienced crowding due to its proximity to the city of Detroit. 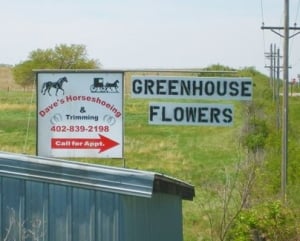 Pointing the way to a pair of Amish businesses in Nebraska

A number of newspaper articles written about the couple note their unusual occupation of running a restaurant over an hour’s drive from their home.  Other Amish, including relatives, joined the Petersheims in Nebraska.  The Verdigre community survived five years, and was reported extinct in 2008 (Amish Settlements Across America: 2008, David Luthy, p.4).

However, there have been indications of some Amish currently living in the area, either remnants of the original settlement or a new group that started a fresh settlement following the first community’s extinction.

Amish first moved to Nebraska in 1880.  A group led by Bishop Yost H. Yoder (arriving from Juniata County, PA) settled near the town of Bertrand in the south-central Nebraska county.  This community never grew large, with historian David Luthy noting that it never totaled more than about a dozen families in its near-quarter-century existence.

The settlement battled drought and poverty.  A number of the settlers built sod houses before later building frame ones.  With Bishop Yoder’s death in 1901, the extinction of the community was hastened, and the last Gosper County settlers moved away in 1904 (The Amish in America: Settlements That Failed 1840-1960, David Luthy pp. 270-6). 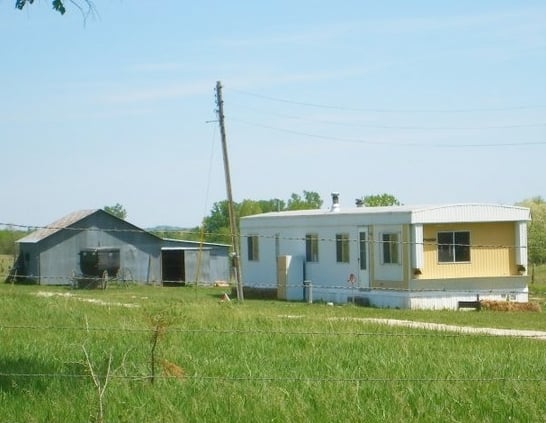 As noted above, today’s Pawnee City settlement is not the first Amish community to exist in the area.  The original Pawnee City Amish settlement was founded in 1977.

At the time, local officials required the Amish to employ a college-educated and certified teacher at their school.  Rather than become involved in a court dispute, Amish from this settlement disbanded, with the families having all moved to other states by 1982 (“Appendix: Amish Migration Patterns”, The Amish Struggle with Modernity, David Luthy, p. 246).

The term “Nebraska Amish” is in fact more commonly used to describe a group living well outside the Cornhusker State.  The term came to be applied to an ultraconservative affiliation of Amish which formed in Mifflin County, Pennsylvania in 1881.

A fledgling conservative-minded group wrote to Yost H. Yoder, an Amish bishop living in the Gosper County, NE settlement.  Yoder responded to their request for help, traveling to Pennsylvania to help organize the new church. 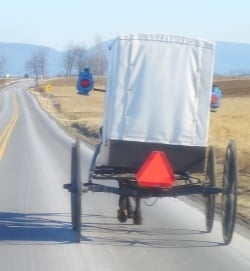 A characteristic white-topped buggy of the Pennsylvania “Nebraska Amish” group

Later, members of Yoder’s own Gosper County church joined the Pennsylvania group, which took the nickname “Nebraska Amish” due to their Nebraska ties (A History of the Amish, Steven M. Nolt, p. 243-6).

Nebraska Amish are today found in two communities in Pennsylvania–the largest, by far, being the settlement in Kischacoquillas Valley, more commonly known as Big Valley–as well as in one small settlement in Ohio.

Amish outposts in the Cornhusker State

For many years, the term “Nebraska Amish” has more readily meant the conservative affiliation found mainly in Pennsylvania’s Big Valley.

However, as we have seen renewed Amish settlement in the Cornhusker State over the past decade, the term has taken on geographical meaning again.

The Amish population in Nebraska remains low.  But with the tendency of Amish to migrate for various reasons–including overcrowding, economic betterment, and church issues–it’s quite possible more Amish will hear the call of the breadbasket state, with its vast tracts of relatively empty, inexpensive land.