The Missouri Amish population has seen rapid growth in recent years, in part due to Amish migration from other states.  Today Missouri is home to over 9,000 Amish in 81 church districts and 38 settlements (Young Center, 2010).

Missouri’s largest Amish settlement is found near the town of Seymour in Webster County (founded 1968), and consists of a dozen church districts.  The Amish at Seymour are a markedly conservative affiliation with ties to the Swiss Amish community in Berne, Indiana (Adams County).

Swiss Amish have specific customs, such as the use of open-top buggies, and speak a different German dialect than most Amish (read more on Swiss Amish).  Common last names in the Seymour community include those typically found in Swiss Amish communities, such as Schwartz, Hilty, and Graber. 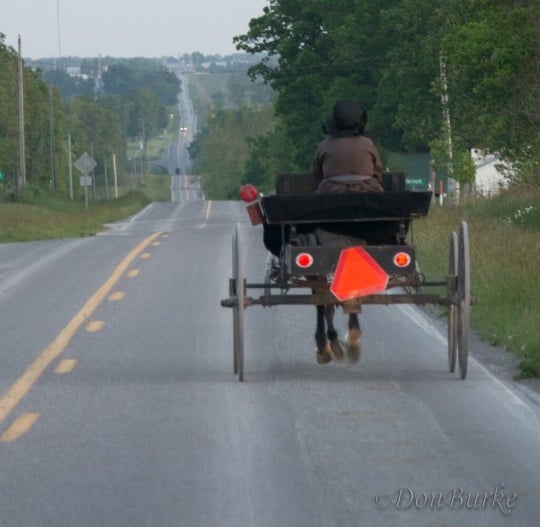 An Amish woman travels by open buggy in the Seymour, MO community

The Amish at Seymour live in the eastern half of Webster County, with most addresses at Seymour but also including the towns of Fordland and Marshfield.  The Webster County Amish make a living by farming as well as in other occupations such as construction and operating small home enterprises such as produce sales.

In recent years the Amish at Seymour have come into the media spotlight on numerous occasions.   An Amish fiction writer set a series of novels in the county’s Amish community.   Amish here were spotlighted for their quickness to rebuild following a 2006 tornado.  And a sex abuse case which occurred in this community made headlines in late 2009.

The Jamesport settlement, lying in Daviess County in the northeastern quadrant of the state, was founded in 1953.

Though it is often pegged as “Missouri’s largest Amish community”, at 8 church districts Jamesport is only about 2/3 the size of the settlement at Seymour (assuming districts of roughly the same average size).

Jamesport is perhaps the best-known Amish community in the Show-Me State, thanks in part to a fairly developed tourist industry and efforts made by local businesses to attract visitors. 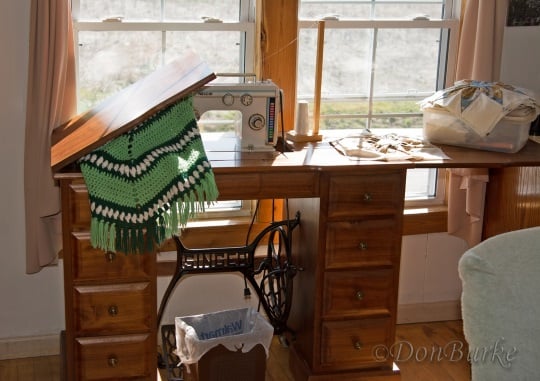 Sewing machine in an Amish home in Jamesport, Missouri

A local map featuring Amish shops as well as numerous guided tours with stops at Amish homes, farms, and businesses testify to the community’s orientation towards visitors.  The Jamesport community also features a sizable produce auction.

The Amish settlement at Clark in Randolph County was founded in 1953 primarily by Iowa Amish seeking greater freedom after conflicts over education in the state (see “Clark, Missouri Old Order Amish Settlement”, GAMEO).  Today Clark is one of the three largest Amish settlements in Missouri, with 9 church districts (roughly 1,200 Amish). 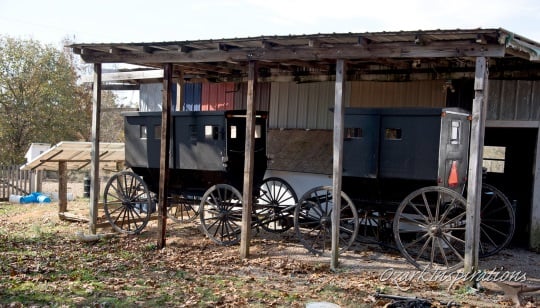 Buggies parked under a shelter in West Plains, MO

The Clark settlement in fact lies in both Randolph and Audrain Counties, and takes in area near the towns of Madison and Sturgeon.  The Global Anabaptist Mennonite Encyclopedia Online (GAMEO) describes the Amish families of the Clark settlement living “in a tightly knit area with Amish farms adjacent to each other for miles along its country roads”.  Amish shops that sell rugs and leather, bakeries, and other businesses dot the community.

This community, though being founded first, is relatively small compared to the three mentioned above, with only 3 church districts as of 2008.

Like Wisconsin, Missouri is also home to a high percentage of small Amish communities. Of the state’s roughly 3 dozen Amish settlements, 23 consisted of a single church district as of 2008. 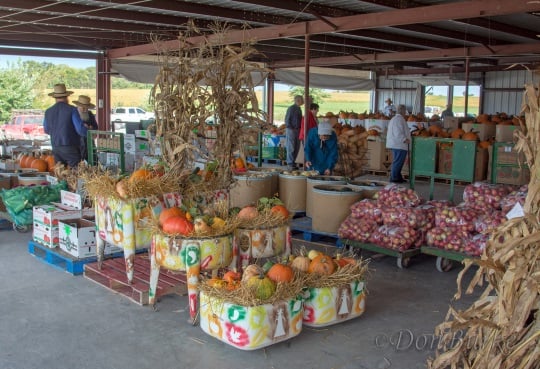 A settlement founded at roughly the same time as Seymour and Clark has not seen the growth those two communities have.  Anabel in Macon County (1957) is today a single church district in size.

Like the community at Seymour, the settlement at Greentop in Schuyler County (2003, 1 district) is a Swiss Amish group, but with ties to the Swiss community in Allen County, Indiana.

Though the oldest settlement today was founded post-WWII, Missouri first saw Amish settlement before the Civil War.  Starting in the 1850s a number of Amish communities were founded and went extinct, maintaining a sporadic Amish presence in the Show Me State into the 1930s.

Amish historian David Luthy notes that the first Amish community in Missouri came about in the mid-1850s near the town of Wheatland in Hickory County.  Amish from a number of states, including Indiana, Iowa, Ohio, and Pennsylvania, settled in this community.

During the Civil War, Amish in the area frequently found themselves at the mercy of both the Union and Confederate armies, who took grain and cattle and in at least one case purchased pies using counterfeit money (Settlements that Failed, Luthy, p 241).  Among the Hickory County settlers was Jackson Knepp, who had joined the Amish from another faith background and eventually moved to Daviess County, Indiana, where there are dozens of Knepp households today. 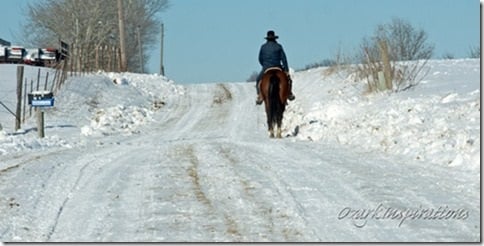 An Amishman rides horseback in the settlement at Canton, MO (Lewis County)

A half century before the present-day Clark-Madison settlement came about in Audrain and Randolph Counties, another Amish community existed near the town of Centralia in Audrain County.  This community was started in 1898 by Amish from Iowa in search of cheaper land.

Luthy explains that the Amish in Audrain County encountered challenges including alternating excessively wet and dry weather.  This community never grew large, and went extinct when the last two Amish families left in 1917.  Luthy describes it as a “transitional group, more liberal than most Old Order Amish but more conservative than the Amish-Mennonites” (Settlements that Failed, Luthy p. 250).

Other extinct settlements were found in the southeast corner of the state, in and near the so-called “Missouri bootheel”, at Poplar Bluff in Butler County, and Sikeston in Scott County.  Both were relatively short-lived settlements, lasting about a decade each during the 1920s and 30s (Settlements that Failed, Luthy pp. 250-257).

A few modern-day Missouri Amish settlements have failed as well.  Communities at Licking in Texas County (founded 1995) and Downing in Schuyler County (2000) both ceased to exist in 2008 (Amish Settlements Across America:2008, Luthy).

Amish have found Missouri especially attractive for settlement in recent years.  Nearly half of Missouri’s 38 Amish settlements have been founded since the year 2000.

Over the past 20 years, Missouri’s Amish population has grown by over 150%, well outpacing the typical growth rate of around 100% (see Young Center, Amish Population Trends 1991-2010).  The excess growth rate in this case is due to in-migration from Amish communities in other states.

Amish are attracted to new areas for numerous reasons, including land prices, proximity to population centers, and the presence of other Amish groups, which may compel or deter settlement.  Missouri has likely attracted Amish for these and other reasons.

With larger communities in states such as Indiana, Pennsylvania and Ohio experiencing population and other pressures, rural states with accessible farmland such as Missouri, Wisconsin, and New York are likely to continue to see high rates of in-migration and growth rates above the norm.