Mountainous West Virginia shares long borders with both Pennsylvania and Ohio, home of the highest concentrations of Amish in the country.  However few Amish have chosen to settle in West Virginia.  Today the state is home to 3 small Amish settlements. 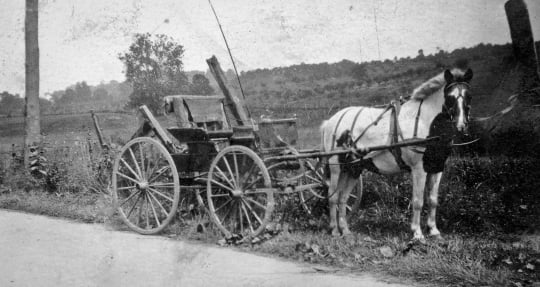 Not an Amish buggy, but close. Photo taken circa 1900 in Mason County, today home to one of the few WVA Amish settlements

Altogether, there are roughly 200 Amish living in West Virginia.  Despite neighboring heavily-Amish Ohio and Pennsylvania, few Amish have ever chosen to settle in the Mountain state. Amish-made furniture can be found in WV in a handful of locations.

Though their presence today is limited, Amish first settled West Virginia over 150 years ago.  Historian David Luthy explains that the settlement at Aurora in Preston County was founded before the civil war in 1850, in what was then Virginia, as West Virginia was not yet a state.   The Aurora settlement was actually paired with another group of Amish across the state line located in Garrett County, Maryland.  The two sides were considered to be a single congregation despite a distance of about ten miles between them (Luthy, Settlements that Failed, p. 489).

The Amish had a difficult time during the Civil War, being harassed and robbed by both Union and Confederate soldiers.  Luthy notes that this experience is commonly given as a reason that the settlement eventually failed.  “The frightening events during the Civil War caused the West Virginia settlers to think of moving elsewhere.  No new settlers were attracted and gradually it lost its older ones through migration and death,” explains Luthy.  By the early 1900s only two families remained (Settlements, p. 490-1).

Eventually only three unmarried children of the settlement’s former bishop remained in Preston County, sharing a farmstead.  They continued to commune with the congregation at Oakland in Garrett County across the border in Maryland.  For a number of years, church was held annually at this last West Virginia Amish household (Settlements, p. 494).