Two Amish communities can be found in Oklahoma

Oklahoma is not known for much Amish settlement.  But the state does have a small but long-lived presence in two places, at Chouteau in Mayes County, and Clarita in Coal County. 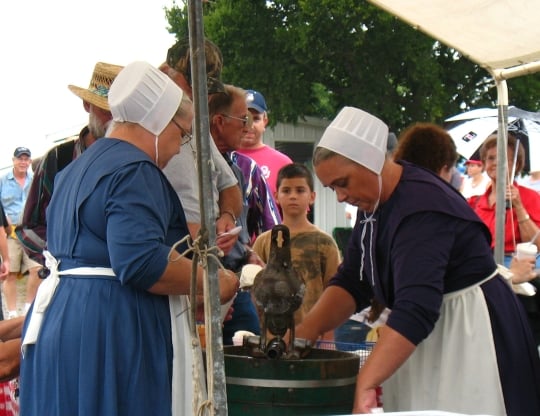 The settlement near Chouteau in Mayes County is over 100 years old, having been founded in 1910.

Chouteau is not a large community, given its age.  But it is the largest in Oklahoma, and the largest Amish community west of the much more heavily-Amish states of Iowa and Missouri.  As of 2011, the Chouteau community numbered 4 church districts, around 600 people.

Most of the first Amish to settle at Chouteau came from Ohio.  The most common last name for Amish in this community is “Yoder” (Encyclopedia of Oklahoma History and Culture: Amish).


The Chouteau Amish are known for its liberal use of tractors, which, unlike most Amish, they use in the fields. Tractors are considered a necessity due to the difficult-to-work soil in the region.  Most Amish do not permit tractors to be used in the fields due to their similarity to cars, though many Amish will allow tractor engines to be used to power machinery near the barn. In addition to farming the Chouteau Amish run a variety of businesses.

There is a bit of a tourism industry at Chouteau as well.  The Amish Cheese House, as well as the Dutch Pantry, are two of the food attractions.  Ropp’s Farm and Bakery is another venue providing baked goods and sweets. At least one retail store selling Amish-made furniture can be found in Chouteau.

The Amish community at Clarita was founded in 1978 by a relatively conservative group of Amish from Ohio and Indiana.  The group is just a single church district in size, despite it’s 3+ decades in existence.

Like the Chouteau community, the Clarita Amish also allow tractors to be used in the fields.  Tractors have been used since the community decided in favor of it in 1994 (with the requirement that they be steel-wheeled).  The justification for tractors was the difficulty of working the region’s hard-packed soil with horses (“Some Amish to Use Tractors; Those Opposed May Move”, The New York Times, April 16, 1995).

“We farmed (exclusively) with horses for the first couple years.  We really all tried,” explained Clarita Amish minister Raymond Miller in an article for Oklahoma Today.  “Well, with good horses, we could plow two acres a day, and you plow ten acres and (out here) that part you plowed is dried out deep as it was plowed.  So it’s just a completely different ball game than what we had back East.”

Miller added: “The reason we agreed to go on and use the tractor ourselves, own the tractor, was so that more of our young people can stay on the farm and raise the family at home” (“The Simple Life”, Ralph Marsh, Oklahoma Today, September 1996). 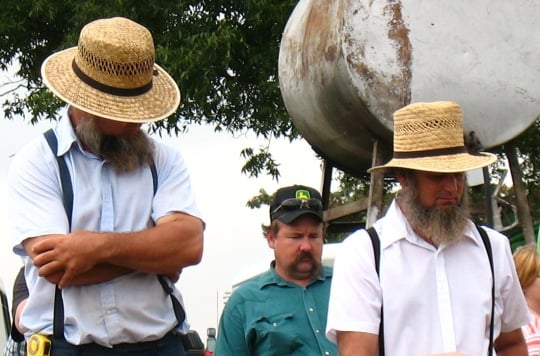 As a result of that decision, Amish who objected moved away from the community, which may be one reason it remains a small size today.  Amish here have also gotten steadily more progressive in other areas of technology, adopting power lawn mowers and garden tillers as well (“The Simple Life”).

The Clarita community is also known for the annual Clarita Amish auction and sale, benefiting the Amish school, and which they have held since 1988 (Encyclopedia of Oklahoma History and Culture: Amish).   The event features quilts, buggies, baked goods, and a range of other items, and attracts large crowds.  The auction is held each year on the second Saturday in September.

Amish have attempted to settle Oklahoma a few times in the past.  The first community founded in Oklahoma was located near the town of Thomas in Custer County.  This settlement was quite long-lived, lasting from 1893 to 1960 (The Amish in America: Settlements that Failed 1840-1960, David Luthy p. 375). 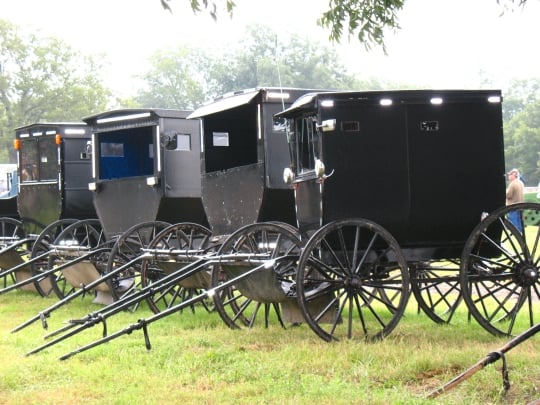 Buggies up for sale at the Amish auction in Clarita, Oklahoma

The Custer County settlement was started by Amishmen who acquired their land during a “land run”, in which the government opened up areas of the Oklahoma Territory for settlement.  The first Amish to set up shop in the area came from Amish communities in Kansas.  Other Amish came from Mississippi, California, Nappanee, Indiana, and the Arthur, Illinois Amish community.  David Luthy explains that the land offered in such land runs was not choice, but that “people who had very little money were glad for the opportunity to settle there”.  Oklahoma itself did not become a state until 14 years after Amish had settled there (Settlements that Failed, p. 375).

Along with the Old Order Amish settlement, a more progressive Amish-Mennonite congregation also developed in Custer County, with the two groups interacting and even attending church services together, especially during the early years.  Many of the Amish living here were quite poor, as were their numerous Indian neighbors.  To make a living, Custer County Amish grew wheat and did 3-4 day hauling trips, aking grain to market in order to supplement income.  Many of the Amish lived in dugout houses.   Eventually railroad tracks were laid through the county, which improved the area’s fortunes (Settlements that Failed, p. 378).

The end of this settlement came about due in part to the adoption of the tractor in 1937, which one can find in today’s Oklahoma Amish communities of Chouteau and Clarita.  The tractor was cited as a main factor in eventually adopting the automobile.  After the tractor, electricity arrived to Amish homes as well.  Some of the Old Order Amish then moved away, while the remaining members affiliated with the Beachy Amish.  The departure of the last Old Order Amish person in 1960 brought the Custer County settlement to an end (Settlements that Failed, p. 383).

A second settlement was founded in the vicinity of Watova in Nowata County in 1931.  Settlers from Hutchinson, Kansas founded this community, attracted by the cheap farm land available in the area, affordable for a depression-era farmer (Settlements that Failed, p. 385-6).

Amish settlers came to Nowata County from a Virginia Amish community, as well as Custer County in Oklahoma.  Conditions in the area were difficult for farmers, though.  The settlement battled drought some years, too much precipitation in others, and generally faced poor growing conditions.  The Nowata County’s bishop died in 1941, and the remaining families moved away over the next two years, bringing the community to an end in 1943 (Settlements that Failed, p. 386-8).

Today, the Oklahoma Amish population is not exactly growing like gangbusters.  Unlike some other Western states, Oklahoma has not attracted much new settlement in recent years (see Colorado Amish).

In the Young Center for Anabaptist and Pietist Studies’ 2010 review of the past two decades of Amish growth, Oklahoma turned out to have one of the slowest-growing Amish populations, at 25%, vs. an overall Amish average of 102%.

But Oklahoma’s two Amish communities are hanging on, despite the challenges of farming in what their Eastern cousins might find to be challenging turf.  They may use tractors a bit more liberally than most Amish, but have carved out a living in the Sooner State for over 100 years and counting.