Over four dozen Amish communities can be found across Pennsylvania

When most people think ‘Amish’, the first place that comes to mind is Lancaster County, Pennsylvania. The Keystone State is home to many more Amish besides those in Lancaster, however. 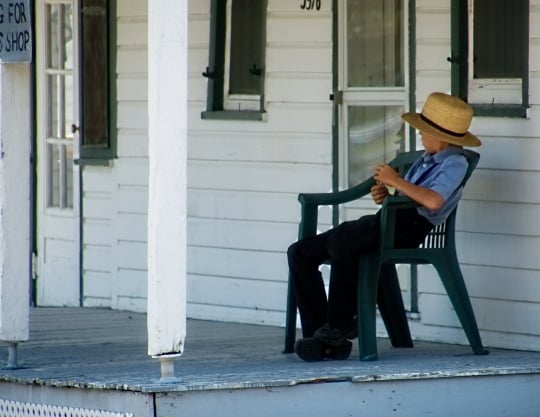 Taking a load off in Lancaster County, Pennsylvania

Lancaster County is home to the oldest (founded circa 1760) and largest Amish community in the world, with 179 church districts as of 2010 (see Amish Studies website for more on Amish populations; Lancaster vs. Holmes County, OH size ranking also explained here).  The Lancaster community includes over a dozen congregations located in neighboring Chester County.

Lancaster County Amish drive grey-topped buggies.  Nearly all Lancaster church districts are considered to be of the same affiliation.  There is some variety of practice and technology among districts, with more conservative Amish generally living in the southern half of the settlement.  Lancaster Amish are considered to be among the more progressive when it comes to technology allowed. 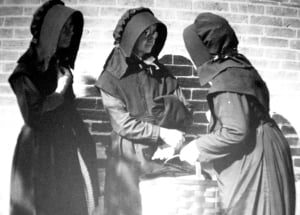 Times have changed. Lancaster County circa 1963

Business has been another way Amish have made a living in the face of high land costs.  Small business is very important in the Lancaster Amish economy, with an estimated 2000 Amish-owned companies.  These include manufacturers, builders, quilt makers, furniture shops, market stands, and a variety of others (read more on PA Amish furniture).

Lancaster County is by far the most heavily-visited Plain community, and has developed a thriving tourist industry.  Some Amish participate in tourism, either operating businesses selling product to tourists, or in some cases catering directly to tour groups.  Tourism is controversial among Amish, with some seeing it as detrimental to the community, and others considering its positive side in the economic support it provides.

Intercourse is the best-known Amish tourist town in Lancaster County

Lancaster County became known to the world after the tragic schoolhouse shootings of October 2006, in which five Amish girls died, and five were wounded, at the hands of a disturbed gunman.  The Amish response of forgiveness became a headline story around the world which inspired many.

Lancaster County is also home to a large population of Old Order Mennonites, who populate the northern end of the county, near Ephrata and its environs.  Old Order Mennonites are distinguished from the Amish here by their black-topped buggies and bicycles (local Amish primarily use push-scooters instead).

Also know as “Team” Mennonites, this group has maintained a stronger connection to farming than the Amish, and rely more heavily on tractors as well to manage and work the land.  Old Order Mennonites and Amish cooperate on education and operate joint schools, attended by children of both groups.

Old Order Mennonites also distinguish themselves in the style of plain dress worn, and by the allowance of public electricity and telephones in the home.

Pennsylvania is home to the well-known settlement at Kishacoquillas Valley, also known as “Big Valley” (Mifflin County).  Big Valley is exactly that—a 30 mile-long by 5-mile wide valley, which is home to three distinct groups of Amish—the so-called Byler, Renno, and Nebraska groups.  These groups are most easily distinguished by the coloration of their carriages—yellow (Byler), black (Renno), and white (Nebraska). 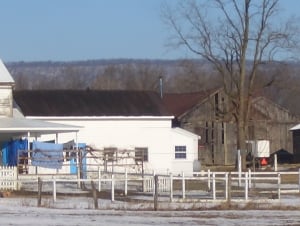 A Nebraska Amish farm in the Big Valley PA settlement

The Nebraska Amish are among the most conservative in Pennsylvania and in Amish society as a whole.  There are various theories as to the reason for the unusual color patterns of the carriages here.  Big Valley is distinct in its diverse Amish population.

Big Valley is the third oldest of all Amish settlements (founded around 1791) and is home to around 30 districts spread across its three main affiliations.

Belleville in the center of the community is home to a well-known auction building, where Amish and their neighbors trade livestock, share meals, and chew the fat.  Big Valley remains largely off the tourist trail due to its fairly remote location.

The small college town of New Wilmington, north of Pittsburgh, is at the center of a quite conservative settlement of Amish.  The New Wilmington group is the 4th largest in the state, with approximately 3,000 Amish in 18 congregations as of 2010 (see Amish Studies). 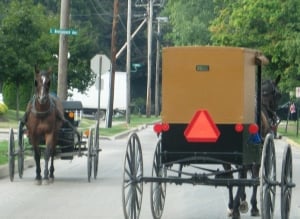 Buggy traffic in the Amish settlement at New Wilmington, PA

Travelers in the New Wilmington settlement will likely notice two distinct colors—the unusual burnt-orange hue of the buggies, and the preponderance of blue—nearly all Amish doors are painted a sky blue, and local Amish stick to wearing shades of blue and purple.

New Wilmington is the only surviving Pennsylvania community founded in the 19th century (1847). 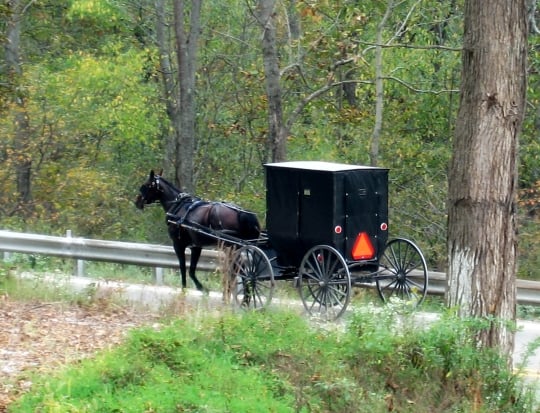 The Midwestern-style black buggy is found in the Smicksburg Amish community in Indiana County, PA

The area of Smicksburg in Indiana County is home to another settlement of Amish of a similar size to New Wilmington (18 church districts), though it was founded over a century later, in 1962.  Amish here drive Midwestern-style black buggies.

Another distinct Pennsylvania Amish settlement can be found at Somerset County in the south-central part of the state on the Maryland border.

Somerset is unusual among Pennsylvania settlements and in fact among nearly all Amish communities in that it is home to one of the only groups of Amish who hold Sunday service at meetinghouses, rather than practicing home worship.

Founded around 1772, Somerset County is the 2nd-oldest Amish community in North America.  Despite its nearly 240-year history, this settlement remains tiny compared to Lancaster County, with a mere 5 church districts. 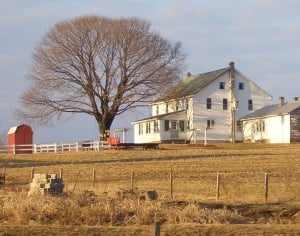 The sizeable Juniata County Amish settlement (1950, 7 districts) has roots in the Big Valley community, a spin-off Renno Amish community.  The Sinking Valley setllement also consists of settlers from the Big Valley settlement, making up a single church district in an isolated valley a dozen or so miles west of the home community.

Crawford County is remarkable for being the county containing the greatest number of individual Amish communities, with a total of 7 as of 2008 (see Amish Settlements Across America: 2008).  Significant settlements in this county include the community at Atlantic (1924, 6 districts), Spartansburg (1966, 9 districts), and Conneautville (1969, 3 districts).

In Clearfield County, a stone’s throw from the town of Punxsutawney (of Groundhog Day fame), one finds a good-sized Amish settlement of 8 congregations.  The only PA Swartzentruber Amish community is found in Cambria County.

Dozens more Amish communities, many just one or two congregations in size, can be found throughout Pennsylvania.

Pennsylvania is home to a wide variety of Amish settlements, ranging from the very conservative to the more progressive.  Lancaster is clearly the state’s most prominent community and will continue to be so, despite having faced skyrocketing land prices and urban encroachment in the latter half of the 20th century.

Though there has been significant out-migration in recent years, Amish continue to form new settlements in Pennsylvania, with a number being founded in the past decade.

Pennsylvania and Ohio have long been considered the foremost states when it comes to the Amish.  The two states have nearly the same amount of settlements and total Amish population.  Additionally, the Lancaster settlement is nearly identical in size to the large Holmes County, Ohio Amish settlement.

Ohio is home to a larger number of individual congregations, however.  Pennsylvania congregations tend to be larger on average.  Despite their similarities in size, in the popular imagination, Pennsylvania remains the state most readily associated with the Amish, and Lancaster the best-known and most heavily-visited community.