New England has seen little Amish settlement.  Maine is the exception, with three small Amish communities as of 2010 (Young Center 2010).

Amish can be found in two locations in Aroostook County–Smyrna and Fort Fairfield–and near the Waldo County town of Unity. 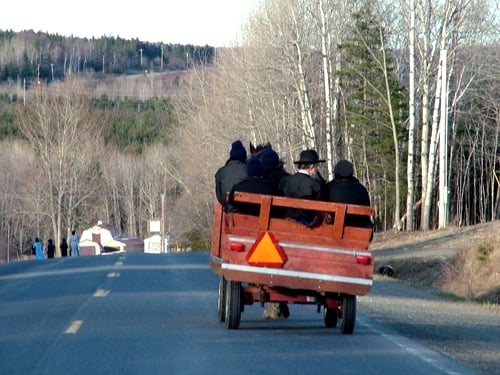 The oldest Maine Amish community is located in Aroostook County near the town of Smyrna.  This settlement was profiled in a piece in the Boston Globe in 2005.  The town of Smyrna itself is described as a “rugged town of potato farmers and loggers, notable for its fierce winters and solitary general store” and “a remote place with little allure for outsiders.” (“Putting Down Roots: Amish find a home in rugged Maine”, Boston Globe, Sarah Schweitzer, February 2, 2005).

However the area has held enough allure to keep Amish around, with families hailing from states as varied as Tennessee, Michigan, Iowa and Maryland making up the settlement.  The community remains small at one congregation in size.  In describing why they came to the area, an early settler explained: ”We wanted to be in an uncontaminated community”…”One less populated with plain people” (“Putting Down Roots”). 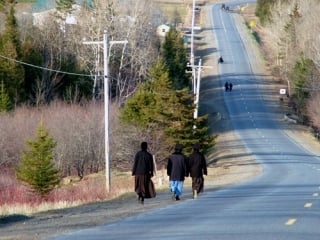 The path this group took to being considered part of the Old Order Amish today is unusual.  Individuals comprising a church somewhat like the Amish, but with key differences leaving them outside the Amish fold, first came to the Smyrna area in 1996.

Following internal change, the group eventually did affiliate with the Old Order Amish in 2000, which may be considered the founding date for this settlement as an Amish community (personal correspondence Stephen Scott; see also Bryce Geiser, “The Christian Communities: A Brotherhood of Covenant and Commitment,” Old Order Notes, 321 Spring Summer 2000).

Amish in Smyrna have created a range of businesses, which as of 2005-06 included greenhouses, a furniture shop, bicycle center, a horse breeder, as well as more traditional farms (read more on Maine Amish furniture).

A second Maine Amish community can be found near the town of Fort Fairfield, also in Aroostook County.  Karen Johnson-Weiner notes that a group of conservative “Joe Troyer” Swartzentruber Amish left the Heuvelton, NY Amish settlement in 2007 in order to found a settlement in Maine (see New York Amish, p. 60).

Amishman Noah Yoder explained that he had spent 2 years searching for the “ideal place” to relocate.  “What drew us to the area was the beautiful scenery, availability of farmland and some of the nicest people we’ve ever met. We’ve been well-accepted here and appreciate that.” (“Fort Fairfield and Easton Welcome Amish Families to Their Communities”, Fort Fairfield Journal, David Deschesne).

Like the other Amish settlements in Maine, the Fort Fairfield Amish are a small group, comprising just a single church district.  Amish in this very plain group supplement their farming with small businesses, including a dry goods store and furniture (“Amish in Fort Fairfield”, March 17, 2011, WLBZ2).  Local news station WLBZ did a profile of this community, which can be viewed here:

The youngest community in Maine, at cheerily-named Unity in Waldo County, was founded in 2008.  Some families arrived at this location from the settlement near the town of Smyrna in Aroostook County.  Other areas contributing settlers included Amish settlements in Missouri and Kentucky.

The Amish have cooperated with locals and have opened small businesses, including wood businesses and a farm stand featuring doughnuts one day a week.  “We’ve been welcomed by the community. The community has been what we expected. They’ve welcomed us and helped us any way they can,” explained Ervin Hochstetler, Deacon of the Unity church. “Farmers have a lot in common, although our method of farming would be quite different than most farms.”(“Amish families reviving farms in Thorndike, Unity”, Bangor Daily News, Walter Griffin, October 23, 2009).

Amish have generally found a warm welcome in Maine.  Maine remains the only New England state with an Amish presence, however.

Harsh climate and distance likely discourage Amish from settlement, but the relatively cheaper land prices and low population typical of the state are pluses for many Amish when considering a new location.

If the current communities continue to show that New England can work for Amish, perhaps more will look North when considering new home locations in future.