Ontario is home to nearly 5,000 Amish

Amish have long lived in Canada, with roots in the country dating to the 1800s.  Today Amish number nearly 5,000 in Canada, in over one dozen communities.  For many years, Ontario was the only province in Canada where Amish could be found. Recently, small settlements have been established in New Brunswick, Prince Edward Island, and Manitoba.

An Amish home near Springford, Ontario

Amish have had a presence in Canada since the 1800s, with the Milverton settlement one of the oldest Amish communities in North America (over 180 years in existence).

Canada experienced a significant influx of Amish post-World War II, with Amish migrants seeking to avoid military conscription or the alternate service programs which arose in place of military service.  GAMEO notes that “Later Canadian restrictions have, however, caused some Amish to return to the United States. This has caused most Ontario Amish settlements to remain at one to two church districts (congregations)” (see GAMEO: Milverton, Ontario, Old Order Amish Settlement).

Today, the Amish population in Canada stands at nearly 5,000.  The Canadian Amish population ranks 11th among all states and provinces, between Illinois (10th) and Minnesota (12th) (see Amish Studies web site and Amish Settlements Across America for further population statistics).

Canada’s largest Amish settlement is found in Perth County, near the communities of Milverton and Millbank. 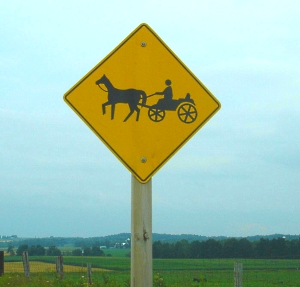 Signs like this one can be found in Perth County, ON in Amish-inhabited areas

The Milverton Amish settlement was founded in 1824 and is the oldest in Canada, with 9 church districts as of 2011 (Raber’s Almanac 2011).  The Milverton community also includes mailing addresses for nearby Millbank, Newton, Linwood, and Atwood.  The Milverton Amish are considered to hold to older dress and buggy-style traditions, and use buggies without tops.  Contact between the older Milverton Amish and the newer Canadian Amish groups has been described as “minimal” (GAMEO).

An indication of different origins are the family names found in this settlement.  Among others, the last names Kuepfer, Albrecht, Jantzi, and Streicher are seen in the Milverton settlement, but are rare elsewhere across Amish North America (the settlement at Kincardine in Bruce County, ON being an exception).

Since the mid-1990s, the Milverton settlement has held an Amish School Auction, open to the public and including items such as furniture, tools, animals and food.  The 2012 edition drew an estimated 10,000 people.  As in other communities, proceeds from the auction are a primary source of funding for area Amish schools.

Founded in 1953,  Aylmer is currently the second-oldest Amish settlement in Canada, and is comprised of 3 church districts.  Aylmer is a small settlement, but well-known throughout Amish society.  This is due to the presence in the community of 2 Amish institutions: Pathway Publishers and the Heritage Historical Library.

Pathway Publishers was founded in 1964 as a publisher of books and monthly publications (see GAMEO, Pathway Publishers).  Today Pathway publishes 3 monthly periodicals: Blackboard Bulletin, a journal for teachers, Young Companion, aimed at an adolescent audience, and the flagship Family Life, a general interest publication for the entire family. 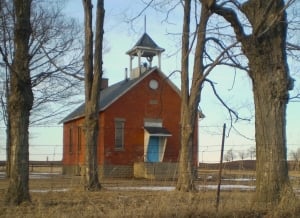 Pathway publications have circulations in the tens of thousands.  Pathway also publishes pamphlets, and textbooks used in Amish schools.

The Heritage Historical Library in the Aylmer settlement is a repository of books and historical documents relating to Amish and Anabaptist history.  The library is curated by Amish historian David Luthy, and serves as a valuable resource for researchers and historians.

The Lucknow Amish settlement in Bruce County was founded in 1973.  Today it numbers 5 church districts, and is the second largest Amish community in Canada.

Oxford County has the most individual Amish settlements in Canada, with 3 separate communities as of 2011.  The oldest and largest is found near the town of Norwich (founded 1954, 4 church districts).  The Lakeside community was started in 1958, and numbers a single church district.  The Mossley/Mt. Elgin area is home to 2 Amish congregations.

Other Amish settlements in Ontario

Besides those mentioned above, Ontario was home to 9 more Amish settlements as of 2011 (see Amish Studies).  At least one Swartzentruber Amish settlement is found in Ontario, in Grey County near the town of Chesley.  At over a half-century in existence, this community is one of Canada’s oldest, and consists of 3 church districts.  A second Amish community, (not a Swartzentruber group), is also found near Chesley (1 church district). 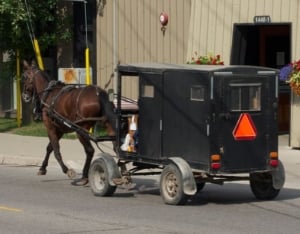 Old Order Mennonites differ in their particular style of dress, place of worship (meetinghouses rather than in-home worship as in the case of Amish) and use of technology (some Old Order Mennonites permit electricity and phones in the home, and make greater use of tractors).  Old Order Mennonite settlments in Ontario can be found in the vicinity of Kitchener, Waterloo, Elmira, St. Jacobs, Aylmer, and other communities.

The only non-American Amish

Canada is the only location outside of the United States where Amish are found.  Though Canada once attracted Amish from the US, in recent years Ontario has seen a slight net 0ut-migration of Amish (see Amish Studies, “Amish Household Migration 2006-2010”).

Ontario is home to a number of well-established settlements, however, and with the twin institutions of Pathway Publishers and the Heritage Historical Library, the province remains an important area of Amish settlement.