Indiana is home to the third-largest Amish population

Indiana, with the world’s third greatest Amish population, also has the most settlements over 10 church districts in size. 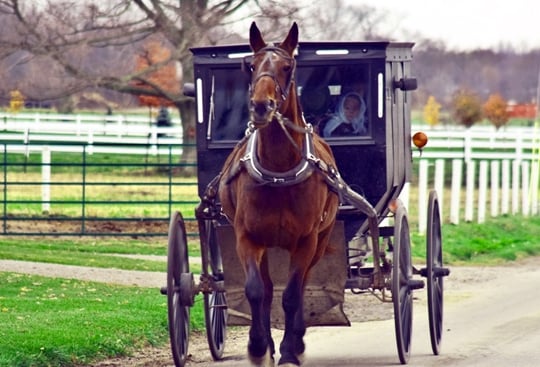 An Amish buggy near Shipshewana, Indiana

From the youngest Amish settlements in the southern end of the state to the oldest at Elkhart-Lagrange Counties (1841, 137 districts) in the north, Indiana is home to a wide diversity of Amish groups.

The settlement at Elkhart and Lagrange Counties is the largest, oldest (founded 1841), and best-known in the state.  Amish occupy the eastern portion of Elkhart County and the western half of adjacent Lagrange County (where they constitute over a third of the highly rural county’s population).  The total Amish population in this community is approximately 20,000, spread over roughly 140 separate congregations (see Amish Studies web site). 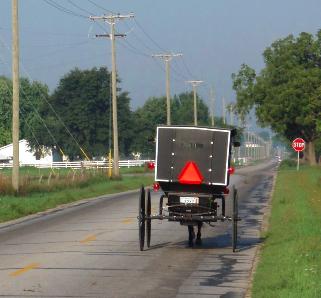 The Elkhart-Lagrange Amish settlement is the largest in Indiana

Elkhart-Lagrange differs from Holmes County, Ohio, in that it is home to a single affiliation of Amish, though one whose churches range from progressive to conservative.

The more conservative groups are generally found on the eastern side of the settlement.  This creates some distinct differences; for instance the gasoline-engine lawnmowers commonly seen in the western half of the settlement give way to rotating reel push-mowers in the east.

Full-time farming is not common in this settlement.  Rather, Elkhart-Lagrange is highly oriented towards factory work.  The majority of Amish household heads here find employment in the local recreational vehicle industry.

Many RV companies are headquartered in the area, and employ heavily-Amish workforces.  In recent years, due to economic difficulty and high fuel prices, the RV industry has struggled.  The many layoffs occurring in the industry have forced some Amish to shift into small business. 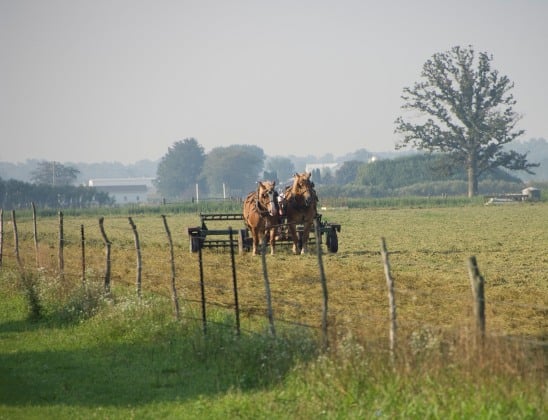 Farming has also declined to low levels, as in other Amish settlements.  However the occasional Amish-owned dairy can still be found.  In addition to milk production, there are a number of hog and poultry producers raising chickens, turkeys, and ducks in this community.  Produce farming has also become popular for some Amish, particularly in the eastern end of the community, with a local auction offering an outlet for Amish fruits and vegetables.

The Elkhart-Lagrange community was featured prominently in the 2002 Rumspringa documentary ‘Devil’s Playground’.  It is also home to the Shipshewana Flea Market, an event which draws thousands weekly to the tiny 500-person hamlet.  The flea market is held every Tuesday and Wednesday from 8am to 5pm (May-October).

The main towns in this settlement include Shipshewana, Middlebury, Topeka, and Millersburg.

Also found in northern Indiana, the well-known community at Nappanee is located a few miles to the southwest of the Elkhart-Lagrange settlement.  The Amish at Nappanee are similar in lifestyle and church rules to those in the Lagrange settlement.  Though it was founded at around the same time, Nappanee is much smaller, with 37 church districts as of 2010 (see Amish Studies website).

However, with the continuous outward spread of both settlements, it’s possible that one day in the future the two will merge to form one contiguous settlement rivaling Lancaster County in size.  Even in 2006, Amish settling in the region between the two communities were faced with the choice of which settlement to attend church in. 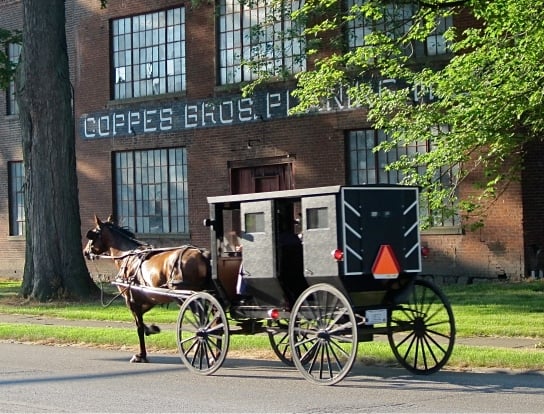 An Amish buggy travels through the town of Nappanee, IN

Nappanee is another tourist favorite, with the often-visited Amish Acres off the main drag west of town.  Not far to the north of Nappanee at Wakarusa is also found a small horse-and-buggy Old Order Mennonite community.  Old Order Mennonites are similar to Amish in some beliefs and practices but outwardly-differentiated by their plain but patterned clothing, lack of beards, and use of electricity.

Straddling Fort Wayne in the northeastern part of Indiana are two ‘Swiss Amish’ settlements, located at Allen and Adams Counties.  The Adams County settlement is slightly older (1850) and the larger of the two, with 50 church districts as of 2010 (see Amish Studies website).

The Adams County group, which also takes in parts of neighboring Jay County, is centered around the town of Berne, a community founded by Swiss settlers in the mid-1800s.  The area also features a tourist attraction known as Amishville, a camping resort featuring a number of tourist-oriented events such as hayrides and gospel concerts. 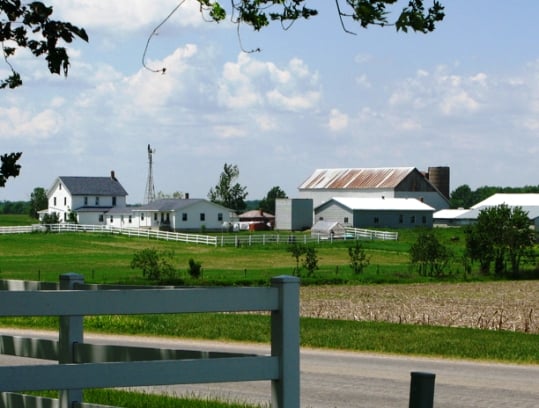 The Amish in Adams County are more conservative than those in northern Indiana, and are visibly plainer in practice and dress.  Amish in this community have maintained a farming tradition to a significantly greater degree than those in the more progressive communities.  The Swiss Amish of Adams and Allen Counties also have a specific history and set of customs rooted in their distinct heritage.

The Swiss Amish of Adams County, like their counterparts in Allen County, have different origins than the majority of North America’s Amish.  The ancestors of Amish in these and other Swiss communities arrived in America in the mid-1800s from Switzerland and surrounding areas. 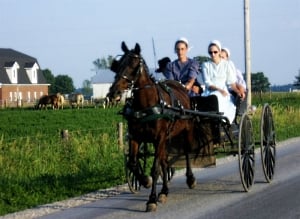 Swiss Amish only travel by open buggy.  Swiss Amish in the Adams or Allen County communities speak a different dialect from their cousins in Elkhart-Lagrange, Nappanee, and other Pennsylvania German Amish settlements.  The difference between the two dialects can be distinct–for example, a Pennsylvania Amishman noted that he actually spoke English with Amish in Allen County.

Many readers may be familiar with ‘Miller’ and ‘Stoltzfus’ being common names among the Amish.  Distinctive Swiss names are found in these settlements.  For instance, ‘Schwartz’ is by far the most common moniker in the Adams County community, with hundreds of households bearing the name.  Other typical Swiss names include Graber, Lengacher, and Wickey.  Swiss Amish have other distinct cultural markers, including the practice of yodeling as well as atypical burial customs.

Many Allen County Amish have prospered in the construction industry, which is key to the Amish economy in this settlement.  Full-time farming in this community has almost completely died out, and home shops and businesses are relatively few compared to other Amish settlements. 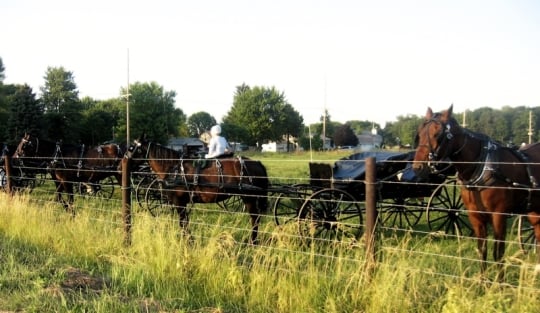 The open-topped buggies characteristic of the Allen County, IN Amish

Interestingly, unlike most other Amish settlements in Indiana and elsewhere, brick is a popular building material in this community.  Some Amish homes even employ faux-brick siding to achieve the desired visual affect.  One tends to see a uniformity of construction styles in Amish settlements and among certain affiliations.  This is quite noticeable in Allen County, with the homes reflecting the prosperity of the community.  The Adams County Amish, in contrast, maintain a “plainer” appearance when it comes to their homes.

The Amish of Daviess County

Another Amish group with Swiss ties is located in the southern part of Indiana, in Daviess County (founded 1868, 26 church districts).  The Daviess County group is not a fully “Swiss” group however, as it is comprised of a mix of Swiss and Pennsylvania German-heritage Amish.  Unlike the Adams or Allen County groups, Amish here use closed-top buggies.

Daviess County is located in a decidedly rural part of the state, full of dusty roads, a few of which turn to mud during downpours.  Small businesses such as furniture shops and construction crews are common in Daviess County.  Dinky’s Auction Center is a local institution located in the middle of the community.  Weekend auctions at Dinky’s are a popular draw for Amish and non-Amish alike. 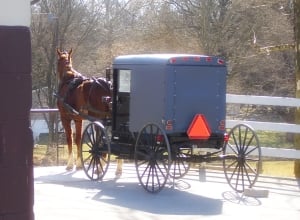 Amish in America’s best-known settlement have long faced population and other pressures, and migration is one way Lancaster Amish have maintained traditional lifestyles.  Cheaper land and less-crowded roads have been strong draws for Lancaster County migrants to Indiana.

Notably, the Pennsylvania Amish migrants to Indiana decided on slightly different church rules that, for example, prohibited the growing of tobacco, commonly raised as a cash crop in the home settlement at Lancaster.  Amish here maintain close ties with the Lancaster community, and are frequently “back-and-forth” with their mother settlement.

Though Indiana has over 2/3 the Amish population of Pennsylvania, it has less than half as many church districts.  This reflects the fact that Amish in Indiana reside in more concentrated areas making for larger-sized settlements on the average.

Indiana has the most Amish communities with over 10 church districts, with five.  In comparison, Ohio has three, while Pennsylvania has four. 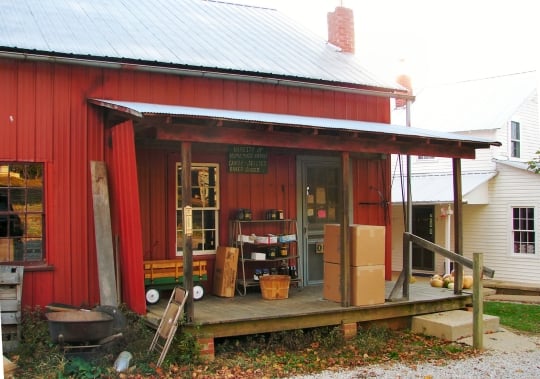 A store run by conservative Amish in southern Indiana

Indiana does have a fair share of smaller communities, however, with around a dozen comprised of just a few congregations or less.  The third-oldest community in the state is actually one of Indiana’s smallest.  The settlement at Kokomo in Howard and Miami Counties was started in 1848, experiencing periods of growth and decline over its long history.  Today the community is only 2 church districts in size. 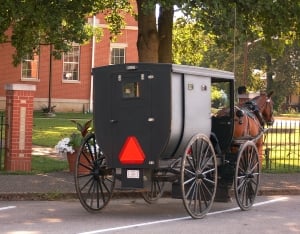 The vicinity of Vevay, Indiana is home to two separate Amish groups. A Delaware-style buggy parked in downtown Vevay

Indiana also exhibits a diverse Amish population.   The state is home to conservative Swartzentruber Amish in Orange County (1994, 2 districts), as well as another conservative but unrelated group in the same county at Paoli (1957, 2 dsitricts).  A New Order Amish settlement is found at Worthington (1992, 1 district).

Indiana, Ohio and Pennsylvania comprise America’s “Amish Heartland”.  Roughly 65% of the total Amish population is found in these three states.

Though in recent years Amish have migrated to less-populous areas of the country such as the western and northern states, Indiana retains its position as a leading state for Amish settlement.

With its abundant farmland and relatively low population density, Indiana remains an attractive place for Amish to live, with a rate of growth over the past 2 decades that has outpaced both Ohio and Pennsylvania.