Kansas has long been home to Amish, but has never had a very large Amish population.

Amish communities in Kansas are either very old–at over 100 years in existence–or very new, having been founded in the past decade. 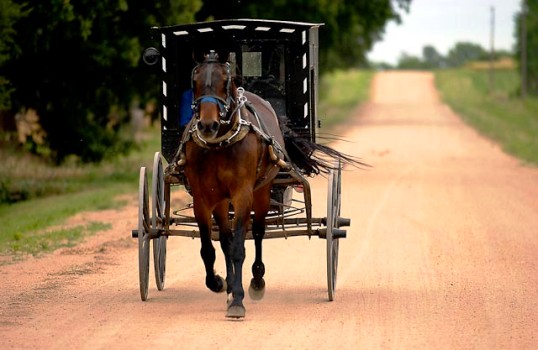 Kansas is home to just a few small Amish communities

The village of Yoder has an interesting tale of origin.  Yoder was founded by Eli M. Yoder, the son of an Amish bishop from Maryland.  In the late 1800s Yoder came to the newly-minted state of Kansas to homestead in Reno County, settling in a location about a dozen miles southwest of the city of Hutchinson. 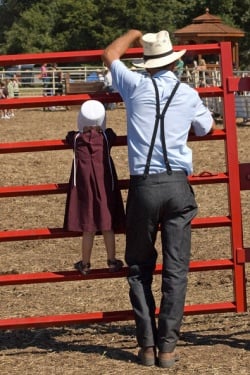 An Amish man and little one take in the view at Yoder Heritage Day in Yoder, Kansas

In 1886 the Missouri Pacific Rail Road constructed a track from Hutchinson to Wichita, which resulted in about 5 acres being split off from the rest of Yoder’s farm.  Yoder used the separated area to construct a post office and general store, which became the nucleus of the village.

During the 1880s, Amish migrants from Shelby County, Illinois began to arrive and settle in the region, with the new village of Yoder becoming the center of the community (see GAMEO, “Yoder (Reno County, Kansas, USA)”).

Yoder is technically the largest Amish settlement in Kansas, but with only 3 church districts–making an Amish population of roughly 400–the community is small by most standards.

Amish at Yoder are among the most progressive when it comes to technology, allowing bulk milk tanks, rototillers, and tractors for field work (see Living Without Electricity, Stephen Scott and Kenneth Pellman).  Due to the high heat in this region of the country some field work may even be done in the evening.

Although Yoder is the center of this community, and still maintains a post office, most Amish homes in this settlement are actually listed as Haven addresses.

Yoder is known to put on an annual Heritage Day celebrating its history and featuring a variety of events, including a buggy race in which Amish take part.

The Yoder/Haven community lies very close to a neighboring settlement lying near Hutchinson.

The Hutchinson Amish settlement is in fact located to the southwest of the city of 40,000, near the hamlet of Partridge.  What ended up becoming the modern-day Hutchinson settlement originated in an early community started around Partridge by Amish arriving at the same time as those who settled near Yoder.  Only about 13 miles separate the two villages. The Hutchinson and Yoder area is home to at least two outlets retailing Amish-made furniture.

The Hutchinson Amish settlement numbers 2 church districts today. Like the Yoder/Haven settlement, it has seen little growth over its 125+ year history.

The Amish at Garnett in Anderson County form the third old Kansas community, having been founded in 1903.

Anderson County is located in the eastern part of the state, roughly 50 miles south of Lawrence.  Like its counterparts in Yoder and Hutchinson, the Anderson County Amish presence remains small today, at just 2 church districts in size.

The Amish community itself is located about 5 miles west of Garnett.  Consisting of numerous scattered farms and homes, the settlement spans about 10 miles north to south, and six miles east-west (see Meindl, “Language Use in an Old Order Amish Community in Kansas”, p. 28).   Amish at Garnett farm and have also branched out into small businesses, such as carpentry, cabinet making, dog breeding, and selling food products at markets (Meindl p. 32) 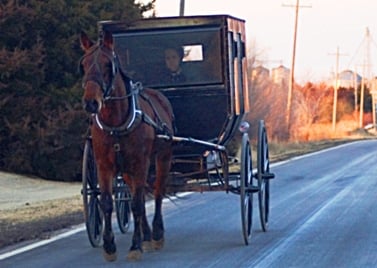 While all Kansas Amish use the horse-and-buggy, some allow tractor travel on roads

The Garnett Amish are liberal when it comes to use of technology.  Like other Kansas Amish communities in Reno County, Amish at Garnett use tractors for farming.  Tractors are also used for road travel when visiting town (Meindl p. 31).

Most Amish children in the Garnett community attend a small public school in the hamlet of Mount Ida at the southern end of the settlement.  Unusual in Amish society, Sunday school is held by Amish in this community at two separate locations, as well as a summer Bible school (see Oklahoma-Kansas Directory, Yoder and Yoder).

The Garnett Amish settlement was founded by Amish from the Haven area of Reno County, KS.  A year after the arrival of the Reno Amish, they were joined by 7 families from a Mississippi Amish settlement (GAMEO, “Anderson County, Kansas Old Order Amish Settlement”).

Over the course of the next century, the Garnett settlement fluctuated in size, never growing much larger than a few dozen families.  Families moved away while others arrived from places such as Illinois, Oklahoma, Arizona, Oregon, Arkansas, Colorado, and other settlements in Kansas.  A low point came in 1947 when the settlement had dwindled to five families (Meindl, p. 26) .

By 1959 the Garnett Amish community had reached a size requiring it to divide into a north and south district (Yoder and Yoder).  Today the size of the community has changed little since that division, numbering about three dozen households (Meindl p. 29).  The Amish in Anderson County maintain ties with those in Reno County (Meindl p. 102).

A number of new settlements have been founded in Kansas over the past few years.  Two communities were founded in Labette County in 2006, one at Parsons and another at Chetopa (see Luthy, Amish Settlements Across America: 2008). 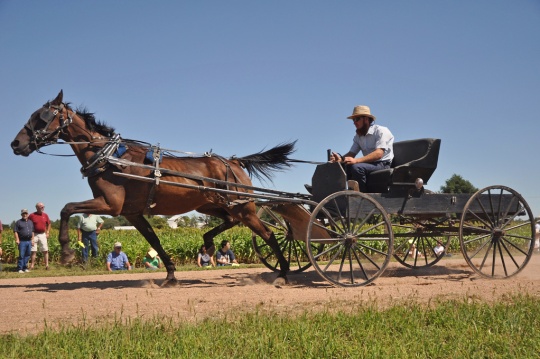 Full speed ahead! An Amish buggy blasts forward at a race during Yoder Heritage Day

Small communities can also be found in Marshall County near Axtell and Marysville, and in Bourbon County near Fort Scott, which is a more conservative group than Amish in Reno County or Anderson County (Meindl 31; 100).

All the young Amish communities were but a single church district in size as of 2010, except for Parsons, which by that time had grown to 2 church districts in size (see Raber’s Almanac, 2010).

Amish began settling Kansas in the mid- to late-1800s, with communities springing up in various locations across the southern half of the state.  Some of these communities were destined to last a long while–sometimes even a few decades–while others disappeared in a matter of years.

The first Amish presence in Kansas was recorded in Lyon County, where a settlement existed from 1869 to 1894.  This community eventually disbanded, with families leaving due to poor harvests as well as likely over disputes regarding progressive ideas such as a plan to build a meetinghouse.

Another noteworthy settlement was found in Ford County at Dodge City, aka the “Cowboy Capital of the World”.  Amish first began arriving to the area a few miles south of Dodge City in 1906, attracted by advertisements placed in the Sugarcreek Budget.  Promoted in Amish circles by a local land agent, the settlement grew rapidly.  Climate challenged the Amish settlers, however, and drought caused many to begin to move away, until the settlement expired in 1929.

A short-lived settlement existed near Hesston in Harvey County, today home to a large Mennonite population.  The few Amish who settled here came from Pennsylvania beginning in 1885.  Historian David Luthy explains that this small group never had a resident minister, and thus attended church with Amish-Mennonites who had arrived at the same time.  After a few years most of the Amish families returned to Pennsylvania, bringing this settlement to an end in 1890.

Kansas, an outpost of Amish settlement

Kansas has long attracted Amish settlement, though its low population today suggests that Amish communities have had difficulty flourishing in this Great Plains state.  Like neighboring Oklahoma, Kansas has seen a fair share of Amish settlement throughout the years, but never much robust growth in its Amish population.

Even within its small population, however, Kansas Amish exhibit a degree of diversity.  This can be seen reflected in the differences in Ordnung, or church standards and regulations, among the existent communities.

For instance the church standards of Amish in Reno and Anderson Counties are generally progressive when it comes to technology, seen in their allowance of a wide array of farm machinery, hydraulic power, as well as use of tractors for field work.

Amish in the community at Fort Scott, however, do not permit indoor plumbing or engines.  Differences in Ordnung also reveal differing attitudes toward permissible social behaviors.  For example, while the Thayer community permits smoking, Amish in the Anderson County settlement do not (Meindl p. 100).