The Lone Star state is home to a single Amish community

The popular image of Texas is a land of oil, beef cattle, and ten-gallon hats. Not exactly what comes to mind when you think “Amish”.  And truth be told, few Amish have ever settled in the Lone Star state.

But in a remote corner of the state Stetson hats give way to broad-rimmed plain ones. Bee County in south Texas has been home to a small Amish settlement since 1999.

Bee County is located deep in southern Texas. The Bee County Amish settlement, located near the county seat of Beeville, was started by Amish from Tennessee in 1999.  The Beeville settlement is one of the most southerly Amish communities in the country, second only to the community at Pinecraft in Sarasota, Florida. 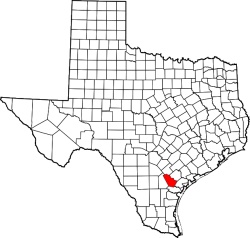 Location of Bee County in Texas, home of the only Amish community in the state

The Bee County community is a single church district in size. The first settlers to this community numbered around two dozen souls. The settlement’s Bishop, Truman Borntrager, cited in a newspaper article at the time, explained that “We came here for the climate…It’s humid in Tennessee.”

Over the years the community has not attracted many settlers–at least not enough to form a second church district.

Amish in the Bee County community have a variety of occupations. Some make buggies, others do horseshoeing (read more about Amish furniture in Texas).  There is a general store and sales of baked goods.  Some produce is grown using irrigation.  In the community there is also some horse training, and fittingly, beekeeping.

Texas saw a number of Amish attempts to settle in the early 1900s. Amish showed interest in establishing themselves in the state already in the late 1800s, with a few groups investigating the possibility of doing so. But the first bona fide settlement did not arise until 1909, near the town of Plainview in Hale County.

Amish historian David Luthy informs us that this area was already home to an Old Mennonite congregation. Five Amish families, from Daviess County, Indiana and Ford County, Kansas, settled the region. However, drought and the lack of ministry led to this settlement’s disbandment just five years after its founding (The Amish in America: Settlements That Failed 1840-1960, pp 456-8).

The early 1900s must have been Texas’ time, because 3 separate attempts were made to settle the state, happening more or less simultaneously. In addition to the Hale County community, 1910 saw the founding of Amish settlements in both Dimmit County and Hidalgo County deep in the southern tip of the state. Both of these settlements extinguished at about the same time as the Hale County settlement did, but for different reasons. 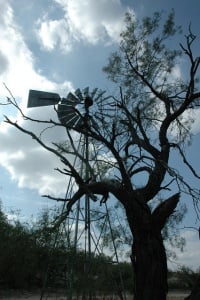 The group which settled in Dimmit County relied on irrigation to water the otherwise arid lands where cactus and mesquite plants grew naturally. The Amish here settled along a half-mile section of road in a “village” arrangement. The reason given is that being primarily produce farmers, they farmed smaller plots of land and did not need to spread out.

A new railroad was to be the lifeline to markets for their produce, but as it happened, the price of shipping from their remote location to markets in the Midwest was greater than the money their crops would bring. It quickly became evident that produce was going to be a losing proposition. Amish began moving away and though at least one farmer attempted to raise grain the following year, with some success, all were gone by 1914. Lack of a market for their crops led to this small community’s demise (Settlements That Failed, pp. 458-462).

The Hidalgo settlement, on the Mexican border, existed from 1910-1914. The first settler was an Ohio native who had begun developing turberculosis and was in search of a warmer climate. Only a handful of families settled here, and no member of the ministry put down roots in the community, one reason for its extinction.   Additionally, during this same time period a revolution was occurring in next-door Mexico, with the Amish within earshot of the shooting. This also contributed to the settlement’s failure (Settlements That Failed, pp. 462-3).

A fourth Texas Amish settlement existed for a short time in the 1920s in Cameron County, the southernmost county in the state.  Luthy described this short-lived attempt to settle extreme south Texas as “adventure”; read more about the group’s attempts here.

As for more recent times, by the late 1980s Amish had begun living in the area of Stephenville in Erath County.  The unusual Stephenville community consisted primarily of “migrant” Amish that worked on local dairy farms.

An article from the time notes a community roughly 20 families in size, where many of the Amish have phones and “live in small houses or mobile homes with electricity”, typically provided by their English employers(“Stephenville Journal; Faraway Amish Try to Keep Faith”, Peter Applebome, New York Times, August 25, 1987).

Texas, an unlikely destination for Amish

The Bee County settlement has existed for over 10 years, and remains the lone footprint of Amish in America’s second-largest state.  While Amish frequently migrate, founding new Western communities in recent years, it remains to be seen if much future settlement will occur in Texas.