Michigan is home to the sixth-largest Amish population

Michigan has a long history of Amish settlement, with the first Amish settling in the Great Lakes State in 1895.  Today Michigan’s Amish population numbers approximately 11,000.

Michigan’s 86 Amish church districts are scattered over 35 settlements, from Hillsdale and Branch Counties in the south, to Mackinac County in the Upper Peninsula.

Amish communities in Michigan include:

The Centreville Amish settlement is Michigan’s oldest and largest

The Amish community at Centreville in St. Joseph County (founded 1910) is the oldest and largest in Michigan. 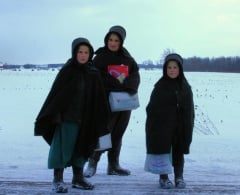 Amish children in Michigan pause during a chilly walk to school

Consisting of 11 church districts (roughly 1,500 individuals), this settlement has been in existence 100  years.  The Centreville Amish community was founded by families from the Swiss Amish communities in Adams and Allen counties in Indiana.

Swiss Amish speak a different German dialect, are typically more conservative when it comes to technology, and tend to marry only within Swiss circles.  Many Swiss Amish also practice yodeling, permit only open-top carriages, and mark graves with wooden stakes rather than gravestones.

Later, these Swiss settlers to Centreville were joined by PA German-ethnicity Amish from Lagrange County to the south.  Today’s community is comprised of descendants from these two distinct Amish ethnic groups.

Today, Centreville has ties with the much larger Amish settlement at Lagrange and Elkhart Counties, just south of the border in Indiana.  Churches in the two communities are in fellowship with one another.  Amishmen from the Centreville community travel daily to work in the region’s RV factories, returning home to Michigan at the end of their shifts. 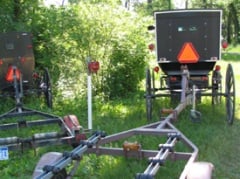 Higher incomes from business and factory work has led to changes in Amish lifestyles. Public boat launch in Centreville, MI

With increasing ties to the world has also come increasing technological change.  Karen Johnson-Weiner notes this change in Train Up a Child: Old Order Amish and Mennonite Schools. Amish in the Centreville community have accepted phones to a greater degree, allowing them in phone booths and in some businesses.  Additionally, bicycles have been allowed in some church districts, as well as rubber tires on large wagons.

Johnson-Weiner notes further ties in education between the two communities, with female teachers from Centreville teaching and living in the Elkhart/Lagrange settlement, and returning home for the weekend.

Centreville Amish, in addition to working in the RV factories to the south, contribute to Michigan’s economy as well.  Some Centerville Amish operate dairy farms.  Others run small businesses such as furniture, fabric, and vinyl shops (read more about Michigan Amish furniture businesses).  As the largest Amish settlement in Michigan, Centreville also has a modest tourist industry.

Branch County is home to 5 distinct Amish settlements, making it one of the most heavily-settled parts of Michigan.  Amish communities can be found at Quincy (1977, 6 districts), Bronson (1971, 1 district), Reading/Hillsdale (1979, 2 districts), Coldwater/Kinderhook (2004, 1 district),  and in California Township (1960, 5 districts). 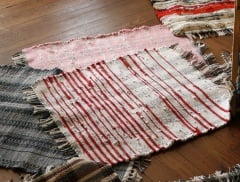 One of the settlements, that of Quincy, is a Swiss Amish settlement, founded by Amish from Norfolk, New York (with roots in the large Swiss Amish community in Allen County, Indiana).  Quincy is at present the second-largest Amish settlement in Michigan, and with 6 church districts has an Amish population of roughly 800.

Another of the Branch County communities, that of Reading/Hillsdale, in fact takes in part of neighboring Hillsdale County as well.  Hillsdale for its part has an additional two Amish communities, at Osseo and Pittsford (1997, 2 districts),  and the Swiss-roots settlement at Camden (1956, 4 districts).

Mio, site of present and past Amish settlement

One of the older Michigan Amish settlements is found at Mio in Oscoda County.  This community of 3 church districts was founded in 1970.  However, Amish had previously lived at Mio for over half a century.  The original Amish community at Mio was founded in 1900 by Amish from Geauga County, Ohio.

These pioneer farmers to the region settled on land formerly covered by thick forests.  Amish historian David Luthy notes that local land agents attracted both Old Order Amish and more progressive Amish-Mennonites to the region through advertisements in the widely-read Sugarcreek Budget newspaper.  Luthy states that their efforts met with great success: “Few, if any settlements grew as rapidly as did the one in Oscoda County” (Settlements that Failed, Luthy, p184). 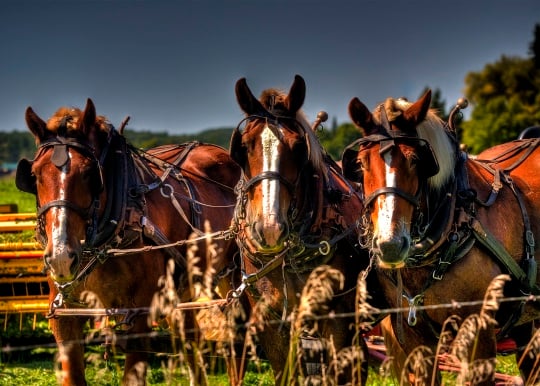 Mio did in fact grow quickly, with over fifty Old Order Amish families arriving in the first five years, attracted by the inexpensive, unimproved land.  To begin farming in this region, farmers had to clear their acres of the many stumps that remained from logging.  But those that did were rewarded, and the inexpensive land prices ($2-5/acre) tempted many to migrate to this heretofore little-settled area of north-central Michigan.

As Mio is located in the upper latitudes of Michigan, the settlement’s farmers dealt with a shorter growing season.  However, Amish settlers saw positives in the extreme winters, Luthy reports.  The Mio Amish “preferred this to the constant thawing as was the case in more southern parts of the state.  They felt their winter was healthier and nicer, and they enjoyed using a sleigh instead of a buggy” (Settlements that Failed, Luthy, p185).  Mio Amish farmers prospered, enjoying bumper crops on the formerly wooded Oscoda County land.  Amish raised clover, hay, peas, corn, potatoes, buckwheat, and other crops. 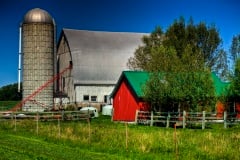 An Amish barn in Oscoda County

Eventually, the Old Order community began to go into decline.  Part of the reason was that Old Order church members began joining the more progressive Amish-Mennonite congregation which had originally accompanied them to the region.

As the competing Mennonite church grew, Old Order Amish moved away or adopted more technological innovations, such as tractors.  The Mio community went extinct as an Old Order Amish settlement with the death of the last remaining bishop in 1954.

Sixteen years later, a new group of Amish would settle here, founding what is today Michigan’s fourth-oldest Amish community.  These settlers, coincidentally, also came from Geauga County, Ohio, and later included Amish from northern Indiana.  The present-day Mio community has seen nothing like the growth of the original one, however, with a population of just 400 individuals after 40 years of existence.

Amish in the Upper Peninsula

Previously, however, an Amish settlement did exist in the Upper Peninsula, at Newberry in Luce County.   This was a very short-lived settlement, lasting only three years (1897-1900).

David Luthy, in The Amish in America: Settlements that Failed 1840-1960 gives the history of this settlement.  Amish settlers from Ohio founded this settlement in the waning years of the 19th century.  One challenge Amish settlers encountered was the particularly harsh northern Michigan climate. 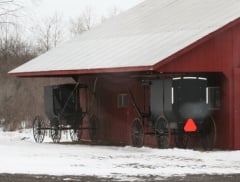 Luthy cites a letter from an early Amish settler who “mentioned that they hadn’t seen any ground since November 22nd and that presently in April there were eighteen inches of snow yet covering the ground” (Settlements that Failed, Luthy, p182).  As a common reason for Amish migration is suitable farmland, harsher climates such as that found in the Upper Peninsula can particularly challenge unestablished, fledgling Amish settlements.  The letter-writer also noted that the growing season was significantly shorter than that in Ohio.

A total of six Amish families settled this rugged area, with the last settler eventually moving to the new settlement at Mio in southern Michigan’s Oscoda County in 1900.

The present-day Mackinac County settlement is located near the village of Engadine.   These modern-day Amish settlers no doubt face similar climate challenges as did the Luce County group.  Consisting of a single district, it is one of the newest settlements in Michigan, and time will tell if it will thrive or fail. 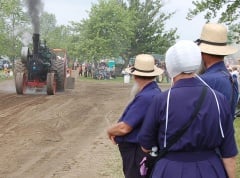 Despite its history of failed settlements, Michigan remains a state with a significant Amish population.  While not nearly as large as that of neighboring Indiana or Ohio, in 2010 Michigan’s Amish population was estimated at over 11,000.  It is also a state that has attracted new Amish settlement, with a net gain of nearly a dozen new communities over the past 2 decades (see Young Center Amish Studies’ Amish Population Trends 1991-2010).

At the same time, for various reasons Michigan has seen a net loss of Amish households in recent years, according to the Young Center at Elizabethtown College.  From 2005-2009, Michigan’s Amish population lost a net total of 45 households to other states.

Some Michigan Amish produce goods for the tourist industry, such as quilts

Additionally, across Michigan one can find a large number of younger settlements founded in recent years, numbering anywhere from a few families to a few hundred individuals.

The Amish in Michigan have been covered on numerous occasions on the Amish America blog.  In 2008 a reader shared a dozen photos of a Montcalm County, MI Amish settlement.  Each year a horse and carriage auction takes place, and is highly attended by the area’s Amish, at Mt. Pleasant, Michigan.  A man raised Amish in Michigan discussed Amish life in one news piece.