Montana’s 5 Amish communities are scattered across the state

Montana has had a continuous Amish presence since 1974.  The state’s 5 communities range from the oldest at Rexford (Lincoln County) in the state’s mountainous northwest corner, to Rosebud County in the eastern Plains. 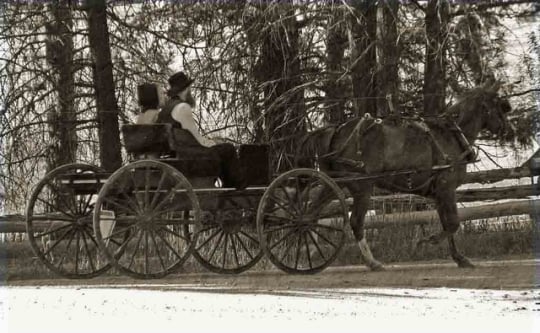 Amish first settled in Montana in 1903, though that pioneer community has since ceased to exist.  The current group of Montana Amish settlements includes 4 communities founded in the last fifteen years.

The oldest Montana Amish community is found near the town of Rexford in Lincoln County.  Amish first settled here in 1974.  Despite its age, the community is small, at just a single congregation.  The area is commonly known and referred to as West Kootenai.

The West Kootenai community, lying a stone’s throw from the Canadian border, is known for its impressive vistas and scenic mountain views.  Amish from Eastern settlements traveling in the West are known to stop and visit at Rexford among other communities. 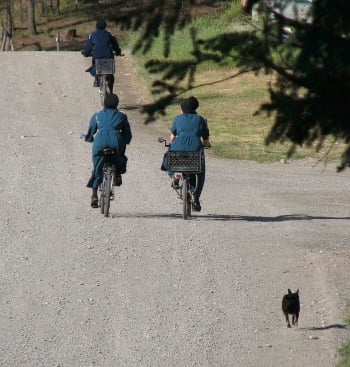 The Rexford area is home to the annual West Kootenai Amish Community Auction, which helps to fund the local Amish school.  The auction is held on the second Saturday in June each year.  The 2011 event will be held Saturday, June 11th, beginning at 9 am.   The location is 250 Whitetail Dr,  Rexford, MT 59930.

Items sold at the auciton include log furniture, cedar furniture, machinery, log cabins, gazebos, wall hangings, wood carvings, handcrafted items, and hand-stitched quilts.  Quilts are made by local Amish as well as by Amish from other settlements around the country.

Amish provide lunch at the event, which includes barbecued chicken, pie, ice cream, and baked goods.  For the 2011 auction, quilts, wall hangings, and other items begin to be sold at 10:30 am, with log homes and machinery going up on the block starting at 12 noon.

Amish from Rexford achieved a degree of publishing fame with the 1988 release of a cookbook entitled  Amish Country Cooking by the Amish of the West Kootenai, Rexford, Montana.  This guide to Plain cuisine was one of the first books translated into the Japanese language, in response to signficant Eastern interest in the Amish people (“Japanese Interest in the Amish”, David Luthy, Family Life, Dec 1997).  Amish at West Kootenai/Rexford also produce log and rustic style furniture (read more about Amish furniture in Montana).

The Amish community at St. Ignatius in Lake County lies within a 3-hour drive of the Rexford community.  The St. Ignatius group began settling the area in 1997, and like Rexford, is a single congregation in size today. 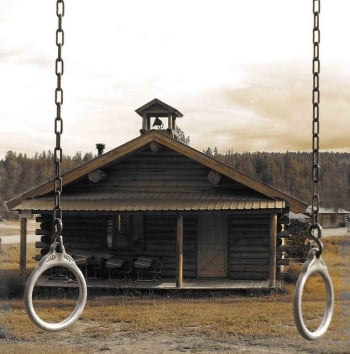 Also like the Rexford Amish, the St. Ignatius group holds a well-attended auction.  The Mission Valley Annual Amish Community Auction is held annually on the weekend after the July 4th weekend.  The 2011 event kicks off at 9:30 am, Saturday July 9th.  The location is the local Amish school, at 13137 Foothills Road, St. Ignatius, MT 59865.

A listing of the items up for sale includes: quilts, furniture, log cabins, crafts, machinery, sheds and mini-barns, children’s playhouses, lawn furniture, log furniture, and a number of other items.  The quilt portion of the auction begins at 11 am. Lunch is provided by the Amish, with a menu including barbecued chicken, cole slaw, potatoes and gravy, rolls, ice cream, and pie.

Like the Rexford Amish auction, a portion of the proceeds from the Lake County auction is used to benefit the Amish school.

Three other Amish settlements are found in Montana.

In the same year as the founding of the St. Ignatius community, another group of Amish settled in Rosebud County in eastern Montana, near the towns of Ashland and Forsyth.The Jefferson County settlement, near Whitehall, was founded in 2001.

Montana’s youngest settlement (founded 2008) is located in Fergus County, near the towns of Moore and Lewistown.  All of these settlements are a single church district in size.

The Libby community emerged from a horse-and-buggy Amish background, comprised of members who previously lived in the West Kootenai settlement.  The Libby group maintains ties with similarly-minded communities in Bonners Ferry, Idaho, and others in Eastern states including Pennsylvania.  Though they have experienced a shift away from the Old Order including a change in theological emphasis and the adoption of vehicles, they maintain some cultural similarities with horse-and-buggy Amish churches. 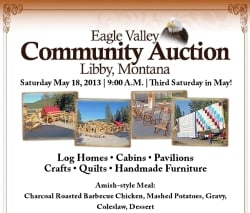 The Libby community holds an annual auction known as the Eagle Valley Community Auction, occurring every third Saturday in May.  The 2014 edition will be held on Saturday, May 17, 2014. Items for sale in previous editions have included log homes and cabins, pavilions, quilts, crafts and handmade furniture.  The auction takes consignments and has booths available for vendors.

The auction benefits the community’s school.  Quilts, furniture, crafts and other items can be donated to this end.  The contact number for donations is (406) 293-8707.

Relatively few Amish have settled in Montana.  In the state’s history a handful of  Amish communities have come and gone.

One community existed in the state in the early-to-mid 1900s, in Dawson County.  Historian David Luthy explains that Amish from North Dakota came to the area of the future town of Bloomfield, lured by inexpensive land sold by the railroad, as well as free plots offered through the Homestead Act.

Over the years, other Amish joined them from communities such as Garnett, Kansas, Nappanee, Indiana, Dover, Delaware, Salinas, California, Fayette County, Illinois, and Coleman, Michigan (The Amish in America: Settlements that Failed 1840-1960, pp. 261-266). 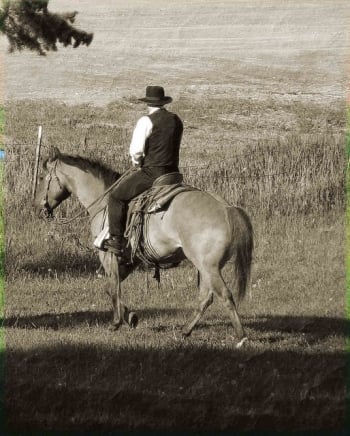 Horseback riding is not common among Amish

The community was isolated, with the nearest trading post a thirty-mile ride by wagon.  An unusual situation arose at Dawson County, with one of the Amishmen handling postal duties for the fledgling community beginning in 1906.  The post office was soon relocated to a larger town, however.  David Luthy notes that “Less than three years later it no longer existed, bringing to an end a rarity in Amish history–the occupation of postmaster” (Settlements that Failed, p. 264).

Amish in Dawson County raised wheat, oats, alfalfa, flax and barley.  They also mined free coal from the abundant veins in the region.  The settlement had a resident minister for nearly all of its existence, but eventually failed.

One reason for its failure was the drying up of free land.  With most available homesteads claimed, the enticement of land was no longer there to draw settlers to the remote region.  The Dawson County community ceased to exist in 1935 (Settlements that Failed, pp. 264-267).

The Dawson County community is not the only extinct Amish settlement.  During the 1990s and 2000s, at least two more Montana Amish communities came and went.  The community at Libby, in Lincoln County, was founded in 1992, going extinct in 2004.

Another short-lived settlement was found at Gold Creek from 2004-2006 (Amish Settlements Across America: 2008, David Luthy).

Outside of their original homeland of Pennsylvania, Amish have also settled heavily in the Midwestern corn belt.  But with rising land prices in these traditional areas, a number of Amish have headed West. 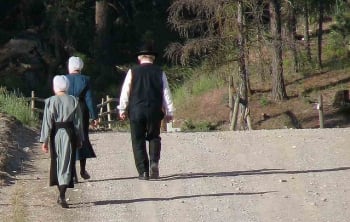 Amish interest in the West is not new, however.  Pioneer Amish attempted to settle in Western states in earlier eras.

In addition to the Dawson County settlement described above, the late 1800s and early 1900s saw Amish forming new communities in California, Arizona, and Oregon, among others.

In the present day, Montana, like Colorado, South Dakota, and other states, has attracted Amish with an adventurous spirit and willingness to travel in search of greener pastures.  With the price of land remaining an important factor, it will be interesting to see if the current trend for Western settlement holds.

Amish Country Cooking by the Amish of the West Kootenai, Rexford, Montana