The Amish youth period Rumspringa, or “running around”, is marked by an increase in social activity

Rumspringa, or “running around”, is the term used to describe the period of adolescence Amish experience starting at around age 16.  Rumspringa has been described in books and films, to varying degrees of accuracy.

There are numerous misconceptions about Rumspringa, which is a formative time for Amish youth.

Rumspringa has been portrayed as time of experimentation and decision.  While Amish youth will mull the decision to join the church at this time, an Amishman who has studied the subject extensively contends that this decision is typically already made in the mind of many youth.  The Rumspringa period serves other purposes besides deciding whether to join the church, detailed here and below.  One of those purposes is to enter into a more formalized social world and peer interaction, which occurs when joining a youth group.

Youth groups vary in their character—some “plainer” or slower groups are tamer, and even adult-supervised, while other “faster” groups are less conservative in expectations and rules.  Youth groups typically meet on weekends.  In the case of the faster groups, this may mean parties or “band hops”, while with the slower, or “singing” groups as they are called in some communities, meet at the home where church service took place for games of volleyball and group singing.  The larger Amish communities may have dozens of youth groups, varying in degree of plainness. 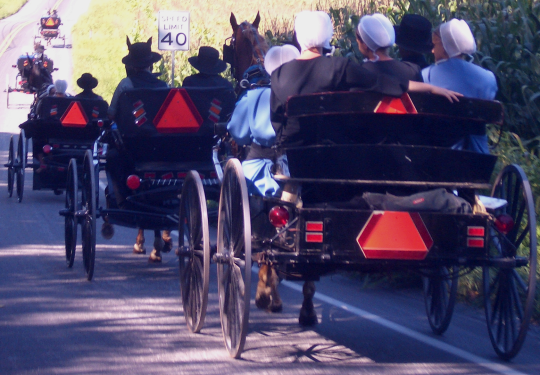 Rumspringa is a time of increased social activity for Amish youth

Contrary to portrayals, most Amish do not participate in heavy partying, drug use, premarital sex, or other illicit behaviors—though these are not unheard of, particularly among “wilder” youth groups.  Some Amish, particularly boys, may acquire a driver’s license and a vehicle during this time, which they might park at their parents’ home.

Some Amish, often boys again, will fit out their buggies with onboard stereo systems with large speakers.  The vast majority of Amish youth, however, do not leave home for the city or even for their own dwelling place within the community, but remain under their parents’ roof until marriage.

The 1998 drug bust of two Lancaster County Amish youth for selling cocaine did much to fuel the idea of Rumspringa as a hedonistic, hypocritical period for Amish youth.  As one would expect, the incident deeply troubled the Amish, and the response included anti-drug classes as well as more parental involvement in youth groups, including the formation of some “slower” groups.

Drug use is generally not widely seen among Amish youth.  Nonetheless, the perception of the youth period as a hedonistic time, driven by national coverage of this story as well as by the follow-up 2002 documentary The Devil’s Playground, has stuck to a degree.

The purpose of Rumspringa

Contrary to belief, Amish parents do not “encourage” their youth to leave home and experiment with sinful behaviors—nor do they condone it.  At the same time, there must be at least a semblance of free choice in the decision to become Amish.  Amish parents may disapprove of their teens’ behaviors, but do not necessarily exercise authority to prevent some of those behaviors. 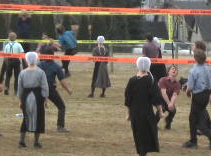 Rumspringa, according to one Amishman who has studied numerous portrayals of the adolescent period, is a time when an Amish youth enters into a more formalized social world, interacting with others in his age group in a variety of settings.

Rather than an angst-filled period of existential choice, it is primarily “a time to find a marriage partner”.  As opposed to a sinful exploration of the world, typical Rumspringa activities are much tamer.  They may include attending church singings, participating in games and activities with one’s “buddy bunch” or “gang” and of course, dating.

Dating among the Amish typically follows a common formula.  A young man will invite a young woman to drive her home in his buggy after a Sunday singing.  A dating couple may exchange letters and see each other mainly on weekends.  A couple may date for a year or longer before a young man may ask for marriage.  He will also seek out the blessing of her parents. 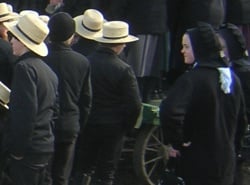 A key purpose of Rumspringa is finding a marriage partner

If all goes to plan, the couple will inform the deacon, who then “publishes” their intent to marry, or in other words, their plans will be announced to the church.  Preparations for a wedding will ensue.  Though it is not common, some Amish  may date non-Amish, which can present complications.

Participating in certain social activities as well as the use of unsanctioned technologies ends for many Amish youth at baptism, and at the latest at marriage in the Amish church.  Following joining the church, Amish may continue to spend time with their youth group, largely for the purpose of finding a spouse.  Baptism and membership in the church is required of prospective Amish mates, a decision which Amish youth typically take around ages 18-22.

Baptism may occur sooner or later however.  Amish girls are typically baptized at a slightly earlier age than boys.  Amish youth often maintain close ties with their Rumspringa friends, which may last a lifetime.