The Illinois Amish population is dominated by the Arthur community

The Amish community near Arthur and Arcola is the largest in Illinois, with a population of around 4,000 Amish.  Other Amish settlements are found across the state, particularly in the southern and western regions. The Illinois Amish population was over 7,500 as of 2021, spread over 19 communities and 58 church districts (Young Center 2021). Updated May 2022

The Arthur Amish community is the largest and by far the oldest Amish settlement in Illinois, founded over 150 years ago.  The settlement is centered around Arthur, a small town of around 2,000 souls. 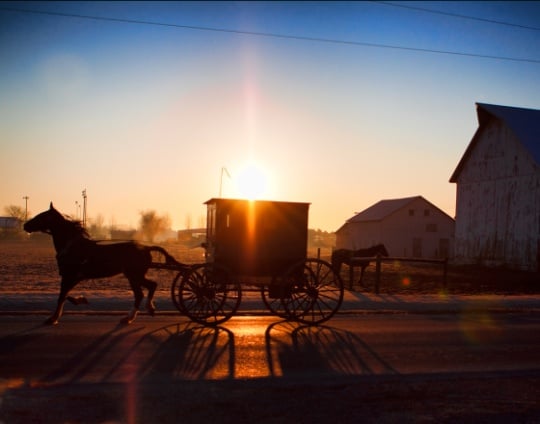 An Amish buggy races across the sun outside Arthur, Illinois

Amish homes are located in both Moultrie and Douglas counties (the county line bisects the town) as well as a few in Coles County to the south. Amish homes and farms extend in all directions, as far east as near Arcola, towards Sullivan, the seat of Moultrie County, in the southwest, and to highway 36 to the north.

The Arthur community was founded in 1864, by Amish from communities in Pennsylvania, Ohio, Indiana, and Iowa (see A History of the Amish, Steven Nolt p 232-3).  The Arthur Amish were not the first Amish community in Illinois, however, with two settlements having been founded in the central part of the state in the 1830s.  But the Arthur community was destined to grow and ultimately survive, while the others eventually disappeared.

The Arthur Amish community has grown to 30 church districts as of 2021 (see Young Center, 2021), comprising well over half the Amish population in Illinois. 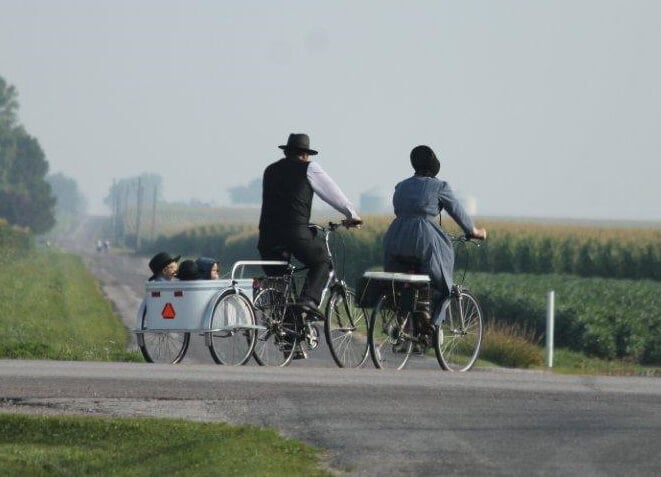 While Arthur Amish do not face quite the same external population pressures as Amish settlements in the east, farmland is still quite expensive, a factor that has affected occupational patterns in the community.  Nonetheless, numerous Amish at Arthur do maintain traditional dairy farms.

While agriculture remains fairly common, Amish at Arthur work in a number of other trades.  Some work for large overhead door manufacturer C.H.I. and can be seen bicycling to and from work at the local plant.  Other Amish in the Arthur community are known for their small business activity, in particular furniture and wood-related enterprises.

Arthur is home to a thriving Amish business community, with many Amish operating businesses in wood-related industries. 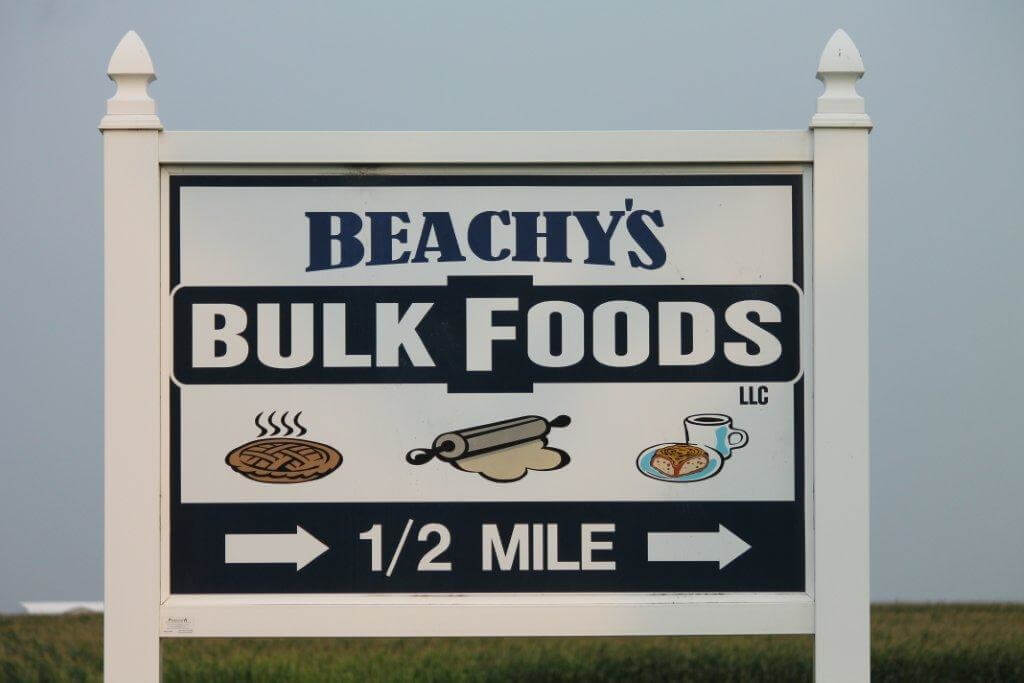 Beachy’s Bulk Foods is one of a large number of home enterprises in the Arthur, IL Amish settlement

Lower-end wood businesses are found at Arthur, such as pallet makers.  More frequently seen are higher-end operations producing cabinets and furniture.  These number in the dozens and employ hundreds of Amish males throughout the community.  Arthur furniture businesses attract consumer attention from urban areas such as Chicago, St. Louis, and Indianapolis, all within a three-hour drive.  Find an Illinois Amish furniture business.

In addition to furniture, a number of other Amish-operated businesses can be found. One Amish family operates a jelly-making and canning business. Another runs a small bookstore catering to the Plain community. Machine, metal, and engine shops are also found throughout the Arthur settlement, as are construction businesses.

As one of the largest Amish communities in the Midwest, Arthur has a fairly developed tourist industry, welcoming visitors from across the region.  Additionally, the area is home to an Amish interpretive center found at Arcola, which specializes in educating the public about the Amish and Anabaptist peoples, as well as more traditional tourist activities.  The Arcola center features a museum, gift shop, and organizes home, farm, and business tours. 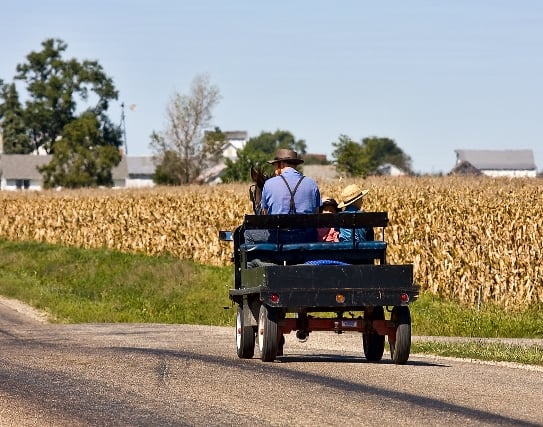 At least one Amish family in the Arthur community hosts non-Amish visitors for meals and overnight stays. Rockome Gardens was once a longstanding tourist destination located in the community. Rockome featured “rock gardens” comprised of numerous rock formations and stone fences, as well as a number of other attractions. However, Rockome closed operations in the 2010s.

While Arthur is by far the largest Amish community in Illinois, there are numerous other small Amish settlements found throughout the state.

After Arthur, the next oldest Illinois Amish community is located at Mt. Vernon in Jefferson County—founded over 120 years after Arthur, in 1987. Ava is the site of the state’s largest Amish community, at four church districts in size. 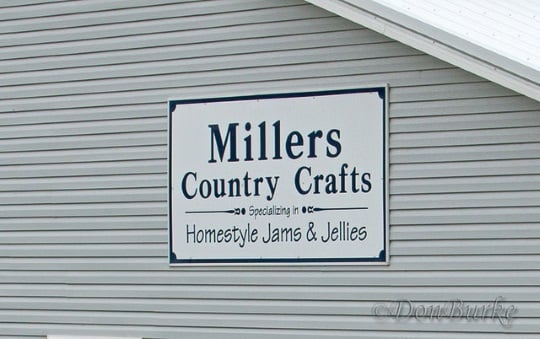 The community at Macomb in McDonough County in western Illinois at one time had 3 districts but later shrunk to 2.  This community is more conservative than the Arthur Amish.

Most other Amish communities in Illinois can be found in the western and southern portions of the state.  Amish are found in Crawford County, home to 3 settlements, Jackson, and Wayne Counties (home to 2 settlements each), and a number of others.

None of the other Illinois Amish communities exceeded 2 church districts (meaning roughly 300 baptized and unbaptized individuals) as of 2008 (Amish Settlements Across America: 2008, Luthy).

A number of Amish settlements which once existed in Illinois no longer do today.  A few were of significant size.

The community in Tazewell and Woodford was formed in 1831, in large part by direct immigrants from Lorraine in France.   Over the next 20 years, around 130 Amish families moved to the area, and by the early 1850s, five congregations had been formed.  Amish historian David Luthy tells us that at by this time, the Tazewell/Woodford settlement was larger than the Lancaster County settlement, and equal to or larger in size than the community at Holmes County, which had been founded over 20 years before the Tazewell/Woodford community (Settlements that Failed, Luthy pp 75-80).

Eventually Amish in this community were influenced by progressive movements which were in the ascendant in America at the time.  Amish in the area began to build meetinghouses, typically a key step in the journey from a traditional to progressive alignment. 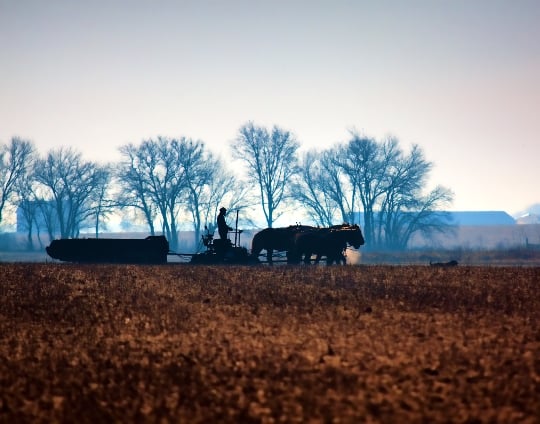 Many Amish at Tazewell and Woodford Counties eventually formed the “Western District Amish Mennonite Conference” in 1884.  Some congregants in this community also joined other movements, including the “Egly Amish” and the “Stuckey Amish” groups.

At the time, many other Amish settlements which were affected by progressive change (such as the Kalona, Iowa Amish, or Elkhart/Lagrange County community in Indiana) formed an Old Order element as well, which kept to traditional practices and beliefs.  Such was not the case with the Tazewell and Woodford County settlement, which is why no Old Order Amish are found today at what was once one of the largest Amish communities in North America.  As a result, Luthy notes that many Amish surnames found in this community are unseen anywhere among Amish today, such as Yordy, Roggy, Litwiller, and Klopfenstein (Settlements that Failed, Luthy, p. 80-81).

Another Amish community was founded in 1835 in Bureau and Putnam Counties, also in north-central Illinois.  In a sense, this community followed a similar progressive path as that of the settlement at Tazewell and Woodford Counties, with member eventually joining the Western District Amish Mennonite Conference mentioned above.

Illinois is a state with a long history of Amish settlement, today represented primarily in the sizeable Arthur community.  Though Arthur is by far the largest Illinois Amish community, Amish have been attracted to settle in other areas of the state.

However, while over the past decade, the Amish population has grown, it has done so at a slower rate than typical for the Amish (the Amish population increased by only about 500 individuals since 2010). This is likely due to out-migration to other states, with some Illinois communities having ceased to exist since 2010.

This is in contrast to the prior 20-year period, when it was listed as a “High Growth State” by the Young Center for Anabaptist and Pietist Studies for the time span 1991-2010, when the Amish population increased by 133% due in part to in-migration from communities outside the state. The community in Saline County, for instance, originates from a Wisconsin Amish settlement. 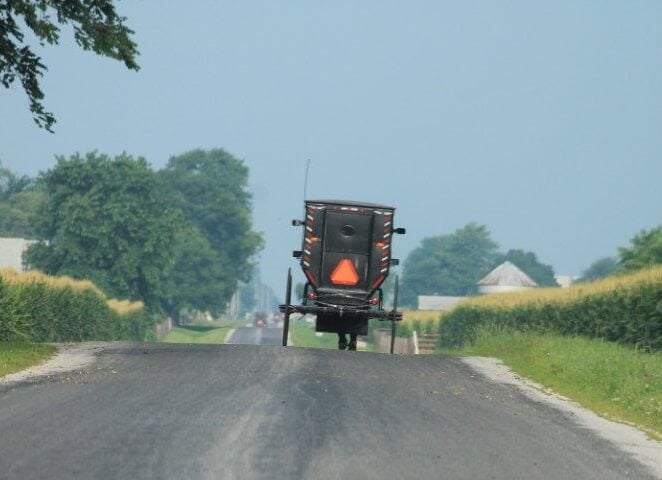 Amish buggies have been an increasingly common sight on the road in some parts of Illinois, while they’ve disappeared from others

A History of the Amish, Steven Nolt

“Amish Population in the United States by State and County, 2021” (https://groups.etown.edu/amishstudies/files/2021/08/Amish-Pop-2021_by-state-and-county.pdf)