For a state with few Plain people, the Amish in Maine sure get a lot of coverage.

Over the past several years, we’ve seen news stories on the atypical Amish community at Unity, ME, Amish convert and Unity resident Matthew Secich, the conservative Amish enclave at Fort Fairfield, and the Smyrna Mills community, the state’s oldest. 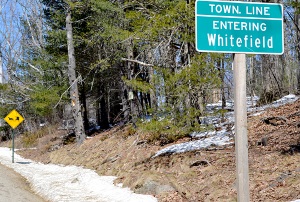 Signs for the town and buggies at Whitefield, ME. Photo by Abigail Adams

Interestingly, the initiative of a local non-Amish couple, Pat and Robin Chase, led to Amish deciding to move to the southern Maine destination from their home settlement in New York:

In early April, they sent a letter to one family, the Yoders, expressing that Whitefield would be a good fit for their slower-paced, agrarian-centered lifestyle. Mose Yoder wrote back explaining that his family might not have time to make it to Whitefield on their land-scouting trip but ensured that they would try.

This didn’t sound concrete enough for the Chases. So instead of writing back, they took a leap of faith, driving overnight 10 hours to the Yoders’ home in Heuvelton, New York.

“We hopped in the car and drove there and landed on their doorstep and said, ‘We’re the Chases, we’re from Maine,’” Robin Chase recalled while sitting in her kitchen this week.

The leap of faith worked. Over the past eight months, the Chases have acted as point people for the Yoders and other Amish families looking to settle in Whitefield. In June the Yoders closed on a 64-acre plot of land just across the Sheepscot River from the Chases’ home.

Mose Yoder and his wife Anna moved to Whitefield about two weeks ago. Since it sounds like they are technically the only families there now, this won’t officially be a “settlement” until a few more souls show up.

But more are expected next month, and a school is planned for the fall.

Learning about the community

Today the Whitefield group gets a profile courtesy of the Lincoln County News. 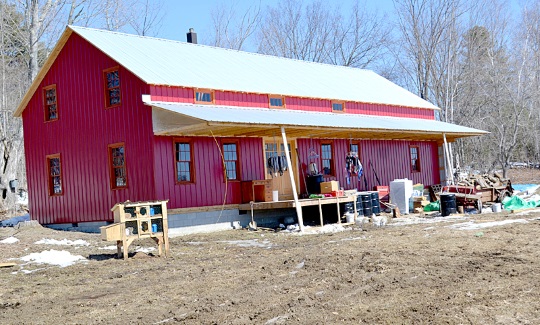 The Yoders’ current home – a barn serving as temporary housing until they build a proper house. Photo by Abigail Adams

The piece is an introduction to the new residents, mainly via comments from Mose Yoder, plus general information about Amish culture and beliefs.

This is the third article on an Amish community which technically is still being created.

This coverage and positive non-Amish response bodes well for the fledgling settlement’s prospects, since Amish are not isolated from their surroundings, but often thrive in part due to their interaction with outsiders.

Note: If you entered last week’s contest for an autographed copy of The Return, we have chosen a winner.