Win An Autographed Copy of The Return (Updated with Winner)

Several years ago we hosted a giveaway for the book Northkill, based on the Jacob Hochstetler massacre, famous in Amish lore. Authors Bob Hostetler and J.M. Hochstetler have returned with the conclusion to that story, The Return. 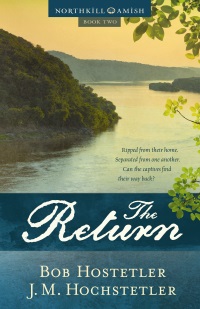 I hope you enjoy today’s interview with Bob and Joan, in which they explain why this story is important to Amish and Mennonites, the historical basis of The Return, and why there are so many ways to spell their last name.

Win an autographed copy of The Return

You also have a chance to win an autographed copy of The Return. To enter, just share a comment on this post. I’ll draw a winner Monday.

Author Interview: Bob Hostetler and J.M. Hochstetler on The Return

What is The Return about?

It is the second part of the story (begun in the 2014 novel, Northkill) of the Hochstetler massacre, a seminal event in the Amish and Mennonite communities not only because of its historical significance to the first organized Anabaptist settlement on this continent but also because of its affirmation of the doctrine of nonresistance.

It tells the story of Jakob Hochstetler and two sons, who survived the massacre but faced captivity among the tribes that had taken them from their home, and of those who hoped for their return in the Northkill community of Eastern Pennsylvania.

Are you each related to the characters in the story?

Joan: I know that I’m descended from the oldest son, John, through his descendants Henry, David H., David D., William D., and Alvin W. My mother, Lula Bontrager, was distantly related to my father through the Hochstetlers in some way, but I haven’t done the research to find out whether her line leads back to John or to one of Jacob’s other children. One of my cousins on the Bontrager side has done an extensive genealogy, and one of these days I’m going to see if he’ll help me figure it out.


Bob: I am also descended from John (through his son Daniel) and also from the captive Joseph (through his son Peter). My grandfather, David A. Hostetler, was born into an Amish family in Goshen, Indiana, where he was known as “Adam’s Davey.” Though he left the community as a young man, he maintained strong ties to his extended family and in the 1950s compiled a family history entitled Descendants of David J. Hochstetler with his aunt, Drusilla (Yoder) Hostetler. I am the third son of David’s first son, Charles Vernon Hostetler.

Why are your names spelled differently?

Bob: There are a number of different spellings in the family. In my case, my grandfather, David A., stopped spelling his name with the “ch” after leaving home.

Joan: My family kept the “ch” and the German pronunciation of the first syllable, “hoch,” which means “high,” with a long “o”. Our ancestor Jacob—and undoubtedly most members of his family—couldn’t write, and the book of our genealogy, Descendents of Jacob Hochstetler (DJH), lists a number of guesses at spelling the name taken from various 18th century Pennsylvania documents such as land transfers and newspaper accounts of the attack. Just a few of the variants are Hoofstetler, Hooshstedler, Hostedler, Hostetter, Hoffstettler (the closest to the original German), and Houghstadler.

I’m guessing the last one is an English person’s attempt to transcribe the German pronunciation, in which Hough would be pronounced like enough, which would actually be close. Once Jacob’s descendants learned to read and write, they spelled their name however they felt led, and sometimes their children and grandchildren changed it to something else. That’s why there are so many variations even though we’re all descended from the same ancestor.

How true to history is the book?

Bob: I’ll let Joan speak to any details she cares to mention, since she did all the heavy lifting, historically speaking, but a big part of the pleasure (and pain) of writing this kind of book is staying true to the things we know while filling in the parts we don’t know. Both of us wanted The Return to accurately reflect not only the facts and details we know from history but to stay as consistent as possible in the parts we had to imagine. For example, even in the final rewrite, Joan discovered a historical detail about Post, the Moravian missionary, that required us to go back through the book and change a number of scenes. 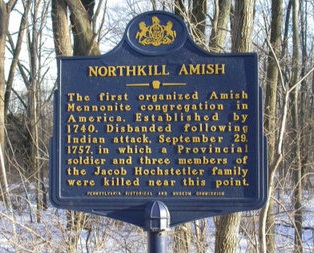 Joan: It’s nothing short of amazing how much is actually known about the attack on our ancestors. To ground the series we used all the details from the accounts collected in DJH, both known facts and family stories that were passed down. We also mined accounts preserved in the Pennsylvania Archives and other sources that were compiled by Beth Hostetler Mark in Our Flesh and Blood, which gave us additional details that allowed us to expand the story. Because Mark included so much relevant material, Our Flesh and Blood became our “bible” for the timeline of the actual events portrayed in The Return and for real-life characters who appear in the story. We are forever in her debt!

Obviously there were many details that we had to construct such as dialog, the personalities and descriptions of the various characters and relations among them, people they might have encountered, and cultural details of the Amish of that period for which there’s little documentation. There’s also no indication of where Joseph and Christian were held by the Indians, other than that one was with a Delaware chief named Custaloga. We don’t know exactly when they returned or how. So there were a number of issues we had to flesh out as best we could from historical hints we found.

One instance is the real Moravian missionary Bob mentioned, Christian Frederick Post, who really did act as a negotiator to the Lenape for the governor of Pennsylvania exactly as we portrayed it, which added an interesting dimension to the story. Overall, this series is as factual and authentic to the time and the Amish culture of the day as we could make it with the resources we had available.

Did you learn anything new about your ancestors in the research and writing process?

Bob: Tons. Before starting on this project, I knew the broad outlines of the story, and of course most of the detail I knew revolved around the 1757 massacre itself. Much of the subsequent story, however, which The Return relates, was uncovered along the way.

Joan: I was very familiar with the historical section at the beginning of Descendents of Jacob Hochstetler. But the details Beth Hostetler Mark compiled, which includes Jacob’s interrogation by British Colonel Bouquet at Carlisle after his escape and before he finally reached home, were totally new to me and nothing less than gripping. In it Jacob gives a detailed account of his movements from the time he was carried away by the Indians up to his rescue by the British at Fort Augusta, including the number of days it took to get from one place to another.

He had to have been an extraordinarily resourceful and determined man to do what he did, and then find and bring his boys home. 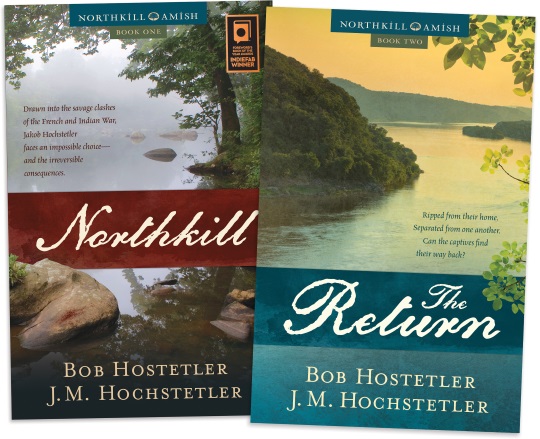 Why should Amish or Mennonite people be interested in this story? What about non-Amish or non-Mennonite readers?

Bob: This story continues to resonate throughout the Amish and Mennonite communities, because it is a vivid example of Jesus’ teachings and of the courage it often takes to live a truly nonviolent, forgiving, Christian life. It also presents a powerful testimony to the contemporary church and the world today.

Joan: I absolutely agree with Bob. Our ancestors’ story is the great defense of nonresistance, the seminal story of the Hochstetler family, and a quintessentially American story of immigrants to this country who became pioneers on the American frontier. That makes it a hugely important story not only for the Amish-Mennonite community, but also for everyone who wants to understand American history.

Historical fiction is very popular, and I’ve always believed it to be a highly effective teaching tool as long as the story is carefully researched so that it’s factually accurate and authentic to its time. In writing this series we wanted to get to the core of who the Amish and Mennonites are, and you couldn’t find a better story to illustrate that than this one.

What do you hope readers will feel or think after reading The Return?

Bob: The first rule of fiction is to entertain and this is a riveting story. So I hope people will find it absorbing and worth recommending to friends and family. Beyond that, though, I truly hope The Return will make readers confront the beauty of the Gospel of Jesus Christ—as well as its demands. I hope people from all sorts of backgrounds will think more thoroughly and more “Christianly” about retaliation, resentment, war, and peace as a result of having read The Return.

Joan: Amen, Bob. If you don’t entertain readers, they’re not going to read the story, and there’s no point in writing it. But if it isn’t grounded firmly in truth and doesn’t offer deep spiritual insights, then it isn’t worth writing.

We hope that we’ve been able to entertain, challenge, and inspire readers through the extraordinary story of how God faithfully worked out His perfect plan through the trials our ancestors suffered—and that that will inform how they deal with their own times of trial. And we pray that Jesus will be glorified in this series and that through it His grace will abound to those who read it.

UPDATE: I used random.org to select a winner – and it was #30, Carl Brecht. Congratulations Carl, drop me an email at ewesner(at)gmail(dot)com and we’ll sort out getting your book to you.

If you didn’t win and would like a copy, The Return is available online here as well as on Amazon. And a thanks to Bob and Joan for the Q-and-A and giveaway.

UPDATE 2: If you’re in the Berlin, Ohio area this weekend, Bob and Joan will be doing a signing of The Return from 9-1pm at the Gospel Book Store.