Did you know that a number of Amish call Maine home? Among the handful of settlements in the Pine Tree State are the Amish at Unity, Maine (Waldo County), an atypical group for several reasons.

Everything I’ve heard about this community suggests it’s a nice little place with a few businesses and which seems to be quite friendly to outsiders (that of course is not what makes it unusual). 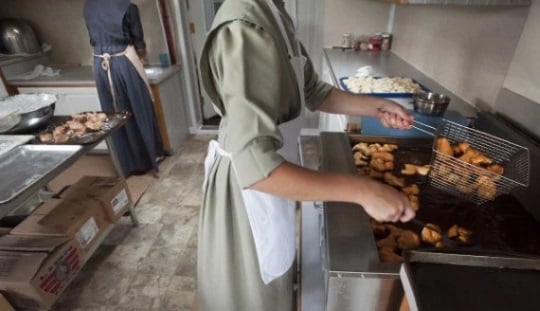 Two years ago a reader shared a detailed account of her visit to the settlement with us, which included stops at a hardware and home goods store, a bakery and woodworker. In that post she wrote that “The locals do seem to most sincerely adore and value the Amish being there – genuinely so. Not as a curiosity.”

Not a Curiosity–But With Some Curious Practices

While they might not be treated as a curiosity, the Amish at Unity have some practices that arouse the curiosity of outsiders and other Amish alike.

Reader John, who visited Unity in 2009, adds that “This is the only group that I know who considers themselves as Old Order Amish that actually go out of their way to testify to the general public, neighbors and anyone that they meet,” describing what he found as a “mixture of the Old Order/New Order ways of life.”

Like a few other settlements, the Amish at Unity have that rare structure in their midst–a church meetinghouse, which you can see described in the video below by Amish Cook editor Kevin Williams (at about 2 minutes in, Kevin also films a segment from within the living room in the home of a community member, and shows us a neat potato-washing device):

The meetinghouse apparently also serves as a school.

The community has another unusual characteristic according to John: “they have two translators for any of the neighbors/friends that may want to experience an Amish sermon, one man and one woman.”

Though these innovations could be considered progressive, one custom that they apparently have that’s similar to more conservative Amish: they prefer not to work away from home (as is typical for Amish construction crews in many places).

What is at the root of the unusual church practices? One possible answer: according to one of our readers, Unity has connections to the unusual experimental (and now-defunct) church group known as the Christian Communities (Cookeville, TN).

Led by Elmo Stoll, an Amish bishop described by G.C. Waldrep as “charismatic”, “well-respected”, and “influential,” the group was meant to be seeker-friendly but technologically very plain.

Services were held in English, community of goods was practiced, and the group drew many spiritual seekers, before eventually disbanding (you can read about this and other atypical “Amishesque” communities in G.C. Waldrep’s “The New Order Amish and Para-Amish Groups” in the July 2008 Mennonite Quarterly Review).

Unity is not this far off from Amish norms, but apparently Stoll’s family is among the members at Unity so some influence likely remains.

The reason I’m mentioning the Amish at Unity today is because they were recently featured in a Bangor Daily News article.

The bulk of the piece is an interview with Caleb Stoll, a minister who made the move to Unity from Ontario in 2008, the year the settlement was founded.

It’s unclear whether Caleb Stoll is related to Elmo Stoll, but it seems quite possible given this suggestion. 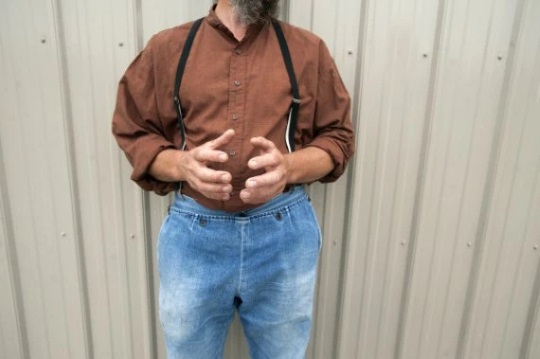 Here are some things you’ll learn in the interesting interview with Stoll:

Maine is still the only state in New England with Amish, but it has seen the occasional new settlement added over the past decade-and-a-half.

All of Maine’s communities except for Unity are found in Aroostook County, Maine’s northernmost, and the largest county east of the Rockies (larger than three states).

These include the conservative Swartzentruber Fort Fairfield community, at least two communities founded since Unity, as well as the state’s oldest settlement at Smyrna.