Amish Technology Use in Different Groups 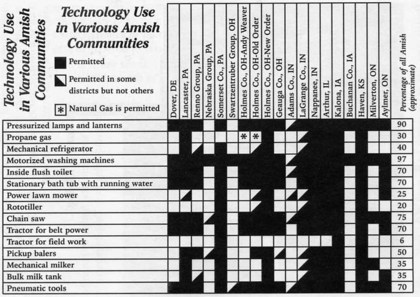 Diversity in the Amish world is a common theme of this blog.  Ever wonder how different Amish groups use technology?

Judging by the chart, it can be seen that the most conservative groups include the Swartzentruber Amish, Nebraska Amish, and the Buchanan County, Iowa Amish (the three of which Amish historian Steven Nolt groups together under the ultraconservative label, referring to the Buchanan group in particular once being seen as ‘almost a conservative conscience within the larger Old Order world), as well as certain segments of the Adams County, Indiana settlement.

Often within the same settlement, there will be differences in what is allowed.  For example, in the northern Indiana settlement, churches on the west side of the community allow gas-powered lawnmowers, while those on the east tend to stick with those old-time rotating-blade pushmowers.

Holmes County, Ohio is a very diverse Anabaptist area.  Donald Kraybill says that there are nine distinct Amish groups living in this, the largest of all Amish settlements.  The four most significant, in order of increasing conservatism, are the New Order, Old Order, Andy Weaver Church, and the Swartzentrubers.

Speaking from experience, I have found that this gauge of openness to technology is also a fairly good gauge of how open the Amish groups are to contact with outsiders.

For instance, in Holmes County, I generally found it much easier to approach members of the Old and New Order churches.  People from those churches were fairly open and talkative.  I got a slightly colder though not unpleasant reception from Andy Weaver members, but found it most difficult to connect with people from the Swartzentruber districts.  Members of ‘lower churches’, as they’re called, just seemed a bit less open to outsiders, or at least to me.

The Amish in Arthur, Illinois, Nappanee, Indiana, as well as the Kalona, Iowa Amish compare to the Holmes County Old and New Orders in my personal experience on the ‘approachability scale’.  Of course it all comes down to the individual, but as you meet a lot of people in a specific settlement, general patterns seem to emerge.

The chart is found in Stephen Scott and Kenneth Pellman’s book, Living Without Electricity.  Scott is a member of a group somewhat related to the Amish, the Old Order River Brethren, and has written a number of informative, concise works on the cultural practice of various Plain groups, including Amish, Mennonites, and Hutterites, such as Plain Buggies, and Why Do They Dress That Way? Highly recommended.