Amish have been considering a move to Canada’s Prince Edward Island province since 2014.

With the recent purchase of land by members of two different Ontario communities, it looks like that is about to happen. From peicanada.com: 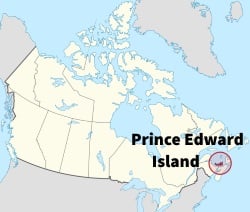 Mr Wallbank recently moved to the Dundas area from Ontario himself, purchasing a farm where he will be doing draft horse farming similar to the Amish.

Currently there are three farms purchased in that area by the Millbank community.

The Norwich community of Amish have purchased five farms in areas such as the Brothers Road, Greenfield Road and Union Road, and are looking for three more.

“They are trying to get houses and barns on them and they have been fairly successful so far.”

The older people selling these farms are very receptive because they will get to see their land farmed again like it was when they were younger.

“They heard they’d see a team of horses out in the field, like their dad or granddad. They’ll be able to bring their grandkids to see the farm just the way it was, and that means a lot. We’re getting pretty good potential sellers,” Mr Wallbank said.

It sounds like locals are pleasantly anticipating their new neighbors (or rather neighbours):

The Amish people can’t believe how friendly all of the local people have been to them so far.

“The neighbours are already coming to say hello. Everybody from the premier to the old guys at Tim Hortons, they’ve all been very friendly.”

He did warn the Amish that the first time they put an Eggs for Sale sign at the end of the lane, they’ll probably have 50 cars with people coming up to say hello.

“After that it should wear out a little bit and they won’t be too badly interrupted in their life.”

This will be the third Canadian province where Amish can be found (last year, a community arose in New Brunswick, in addition to the nearly two-century Amish presence in Ontario).

Prince Edward Island is Canada’s smallest by land area, and fourth-smallest by population (around 140,000 residents).

The province has generated Plain interest lately not just among the Amish. There is also news of a potential Old Order Mennonite move to PEI.

As a fast-growing–and mobile–people, it’s interesting to track where new Amish communities appear on the map. And also, to guess where they might move next. In a recent post I suggested 5 currently Amish-less states where we may see them at some point.