What do Amish think about photography?

It is commonly said that Amish don’t like having their photos taken.  “No photos please” signs are common in Amish communities.  Amish dislike zoo-exhibit treatment, and most avoid picture-seeking tourists and photojournalists seeking to capture their likenesses.   At the same time, there is a variety of thought on picture-taking among Amish.

Some Amish completely refuse to allow themselves to be photographed.  Posed photos in particularly may be seen as a show of pride.  On the other hand, some Amish make a distinction between having one’s photo taken in a natural setting, vs. posing for a photo.  Some have no problem with allowing themselves to be filmed or photographed, as long as it is obvious that they are not posing. 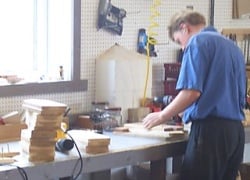 This is how documentarians and photographers of the Amish often work.  Dirk Eitzen, in “The Amish and the Media”, explains the idea of “plausible deniability”—if an Amish person can plausibly deny that he was complicit, filming may be acceptable.  This often requires shooting from the side or at a distance but not directly.  Were an Amish person to be captured posing or speaking into a camera, then obviously he would not be able to deny willing participation.

Amish are typically wary of showing one’s face direct on camera.  When Amish do agree to interviews on camera, they are often done from the side or with face obscured.  The reluctance to show one’s face in a photo is also a reason that Amish identification is usually issued without a photograph.  This practice however has been problematic in recent years with new requirements mandating IDs with photos at United States border crossings.  As Amish sometimes travel to settlements in Canada, or to Mexico for cheaper medical treatment, this new mandate has been an obstacle for some.

Despite the well-known reluctance of the Amish to be photographed, some visitors to Amish communities ignore etiquette and may aggressively pursue a photo.  Signage outside of Amish businesses in tourist areas may reflect frustration that comes from being treated as an attraction.  A particularly direct sign on an equestrian shop in the tourist center of Intercourse in Lancaster County unequivocally bans tourists from the premises.

Understandably, no one likes a camera pointed in their face, and in some settlements this behavior is worse than in others.  Eager tourists can sometimes behave recklessly in pursuit of a shot.  A car with a New York license plate was observed coming to a full stop in the middle of a busy county highway, in order to capture a shot of an oncoming buggy.  Such behavior is not uncommon, particularly in heavy Amish tourist areas such as Lancaster County.

Amish often consider photos of their children different than photos of adults.  Opinions vary but many Amish allow photos of children.  One reason is that children are not yet baptized members of the church, and not necessarily bound by the stricture against posing for photos.  Numerous professional photographers have featured photos of Amish children. 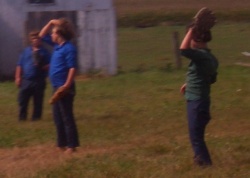 Photos of children, or shots taken from the side, are often acceptable to Amish

Children are sometimes even used by the Amish themselves in business advertisements.  At the same time, other Amish do not allow photos of their children to be taken.

Most Amish have little problem with photos taken of their land, dwellings, businesses, carriages, and so on.  Amish typically feature images of their businesses, products or farms and homes in advertisements for their products.  Calendars produced by Amish businesses, popular among Amish themselves, often feature such images as well.  At Amish America, we stick to shots of farm scenes, buggies, photos taken from a distance or ones that do not directly show the individual’s face.

While the stricture against posed photography generally holds, general attitudes towards photography may be changing, at least among a segment of the Amish population.  This may be due to increased Amish contact with the world, due to an occupational shift that has seen them opening businesses requiring greater contact with outsiders.  As Amish have come under the eye of the media, there have been examples of Amish appearing direct on camera for television shows and news pieces.

Attitudes to photography typically vary among individuals as well as between Amish affiliations.  Amish also acknowledge different approaches to taking photos.  On the whole, the Amish remain wary of picture-taking, but it’s probable that Amish attitudes to photography are softer today than they might have been 50 years ago.