The Amish of Fort Fairfield, Maine

Maine is now home to five Amish settlements, up from three just a few years ago.

Thanks to reader Judy for passing along an excellent article on the Amish of the Fort Fairfield area, in Maine’s northernmost county of Aroostook.

This piece in Down East Magazine traces the path of the 6-year-old community via interviews with the community’s founder, 45-year-old craftsman Noah Yoder, and a few others. 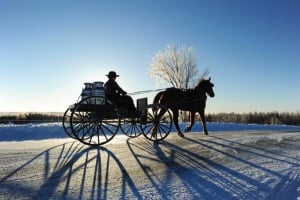 That is around 140 people total, though only three of them, according to the article, are older than 50.  Among the businesses is an Amish-run store, plus a number of dairies, and two schoolhouses.

I recommend reading the article in full for one of the best depictions I’ve read of life in a relatively new Amish settlement.  A few points which stood out: