There’s a nice story making the rounds about a man named Matthew Secich who recently joined the Amish community at Unity, Maine.

If the name of that community rings a bell, you may have seen it discussed here before. Here is one reader’s account of a visit to the settlement, and a look at what makes the community unusual.

In his new home in southern Maine, Secich has opened a business selling upscale meats and cheeses called Charcuterie (I’m going to hazard a guess that this is the only Amish-owned business with that name). People seem to like his foods, as described in this story in the Portland Press Herald. 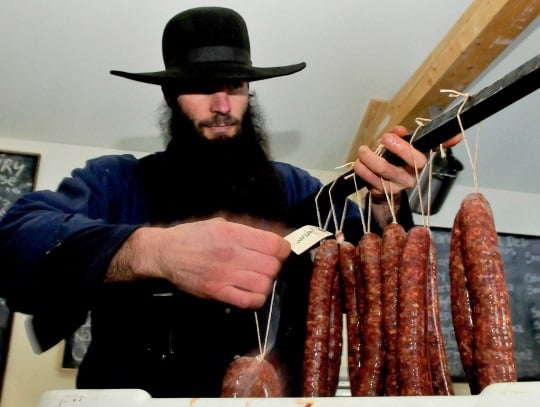 Matthew Secich in his meat and cheese shop. Photo by David Leaming/Morning Sentinel

One of the things that makes the Unity community atypical is that it is quite friendly to converts. Secich himself joined the community within the past year, and seems to have found some spiritual peace:

“I went home one night and got on my knees and asked for forgiveness,” he said. For his lack of compassion for others, his nights with restaurant friends and a fifth of Jim Beam with a side of Pabst Blue Ribbon, for that overactive ego. “I gave my life to the Lord, which I never would have imagined in the heyday of my chaos.”

After stops in Mennonite communities in Vermont and Maine, Secich found his way to the Unity Amish.

Secich is described in the article as “peripatetic.” If you had to look that word up, that makes two of us.

In other words he has a tendency to move around a lot, as evidenced by his previous work stints in numerous restaurants, never staying in one place for long.

With that in mind, I found one comment of Secich’s particularly interesting: “Lord willing, I stay here awhile.”

Perhaps this is the final stop of his journey, so to speak. But Amish seekers have had a reputation of not always sticking with it. And seeker-friendly communities have not always been known to flourish for that matter.

But of course, everyone writes his own story.