You may have heard the term affiliation used to describe this or that Amish group. So just what is an affiliation?

Broadly speaking, affiliations describe groupings of Amish churches of similar practice, identity, and lifestyle. The best discussion of Amish affiliations I’ve come across is in Chapter 8 of The Amish by Donald Kraybill, Karen Johnson-Weiner, and Steven Nolt. The authors describe the concept:

Affiliated congregations share similar Ordnungs, which specify distinctive lifestyles and visible symbols that set them apart from other affiliations.  These interwoven features create a unique identity that is expressed in use of technology and consumer products, style of architecture, levels of income, degree of social isolation, and types of occupation as well as in hairstyles, dress patterns, and carriage color and style.  Members of an affiliation have a collective awareness of in-group membership and are known as a distinctive group within Amish society and, sometimes, by non-Amish people (p. 138).

In brief, “affiliations are loose federations of like-minded Amish churches” (p. 140). The Amish features a comprehensive chart of affiliations (p. 139).  The authors use the metrics of a minimum of 2 districts, and at least 20 years of shared history to define an affiliation. 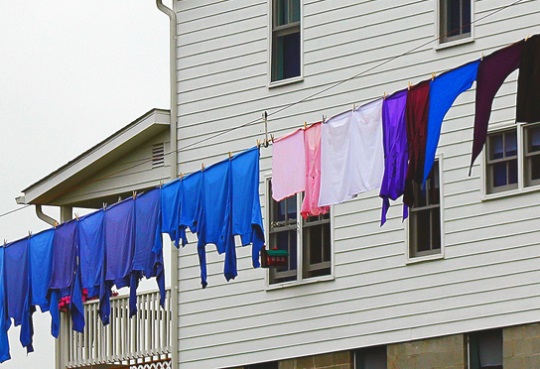 Based on these parameters, they have identified over 40 Amish affiliations, ranging in size from the Lancaster County affiliation (291 church districts spread over 37 settlements in 8 states as of 2011) down to the Kokomo, Indiana affiliation, of just 2 districts in a single settlement.

Affiliated churches don’t necessarily do everything alike–and often won’t, the larger the affiliation becomes, since decisions on technology and other guidelines are taken by the local congregation.

So you’ll see some diversity in lifestyle even within an affiliation, such as within Elkhart and Lagrange Counties where you can observe differences across the settlement (with visibly plainer districts in the east and northwest portions of the community).

When you’re talking about an affiliation, it’s important to remember this is something that is distinct from a settlement or congregation, though sometimes an entire affiliation will be confined within a single settlement.  You see this with Kokomo mentioned above, or in the much larger examples of Daviess County, Indiana (26 districts in one settlement/affiliation), or Nappanee, Indiana (37 districts).

These are churches which either haven’t produced lasting affiliated daughter settlements and/or which aren’t, for whatever reason, affiliated with Amish in other communities. This doesn’t mean they don’t interact in other ways, such as marrying across groups or preaching in each other’s services.

Amish of different (but not too different) stripes maintain fellowship ties across affiliations.  For instance the Andy Weaver Amish of Holmes County, Ohio are in fellowship with Amish in Lancaster County, as are those at Kalona, Iowa with the Amish at Bloomfield, Iowa, among many examples.

Being in fellowship means that two groups “have a spiritual affinity that allows them to collaborate on some level” (p. 151). This can include preaching in one another’s services, exchanging the holy kiss, openness to intermarriage, and dispute mediation.

There are distinctions between being in “full fellowship” and “partial fellowship”.  A church’s stance on shunning, technology, occupations and other issues may enable or hinder fellowship with another group.

The development of affiliations has reflected the widening diversity of Amish society. At the beginning of the 20th century, there were only 3 or 4 Amish affiliations. Today, this number exceeds 40, and surpasses 65 if you count the subgroups within certain affiliations (The Amish, p. 138).

While material differences can exist within an affiliation, the starkest differences are found across affiliations. The authors of The Amish quote a Swartzentruber bishop, who says about the Lancaster Amish: “They’re as different from us as you [English] are” (p. 143).  The feeling may very well be mutual–often enough, you hear something similar from more progressive Amish about the most traditional churches. 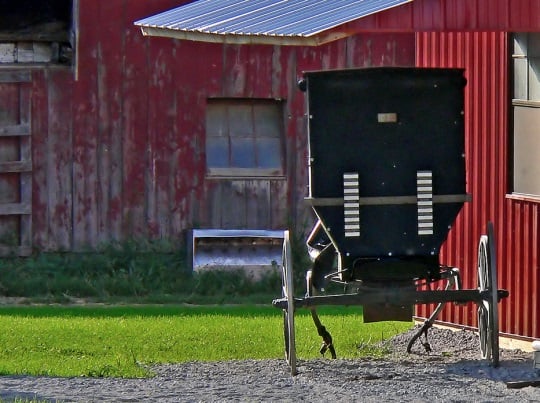 For example, Swartzentruber Amish showed an increase of 171% from 1991 to 2010. Towards the other end of the spectrum, Amish within the Arthur affiliation had grown only 66% over that time, and New Order Amish only 53% (p. 153).

Other facts about Amish affliations

A few more interesting facts about Amish affiliations (from Chapter 8 of The Amish):

You’ll find a lot more worth reading on Amish affiliations in The Amish.