Joe Donnermeyer has dug deep into the settlement data – particularly a separate set of data which he discusses below – and today presents us with a list of Amish communities which cross state borders. In other words, communities having households in two neighboring states.

Joe has identified 14 such communities. If you enjoy the geography of Amish settlements as I do, I imagine you’ll like the following post by Joe.

It can be said that the Amish know no borders. Their history begins in mostly German-speaking regions of Europe, but transitioned completely to Canada and the United States, a process that began nearly three centuries ago.

A county-based estimate of the Amish population in the U.S. was recently completed for the Religious Congregations and Membership Study, conducted by the Association of Statisticians of American Religious Bodies. Like the census of the U.S. population, it is a decennial census, which means it is conducted every ten years. 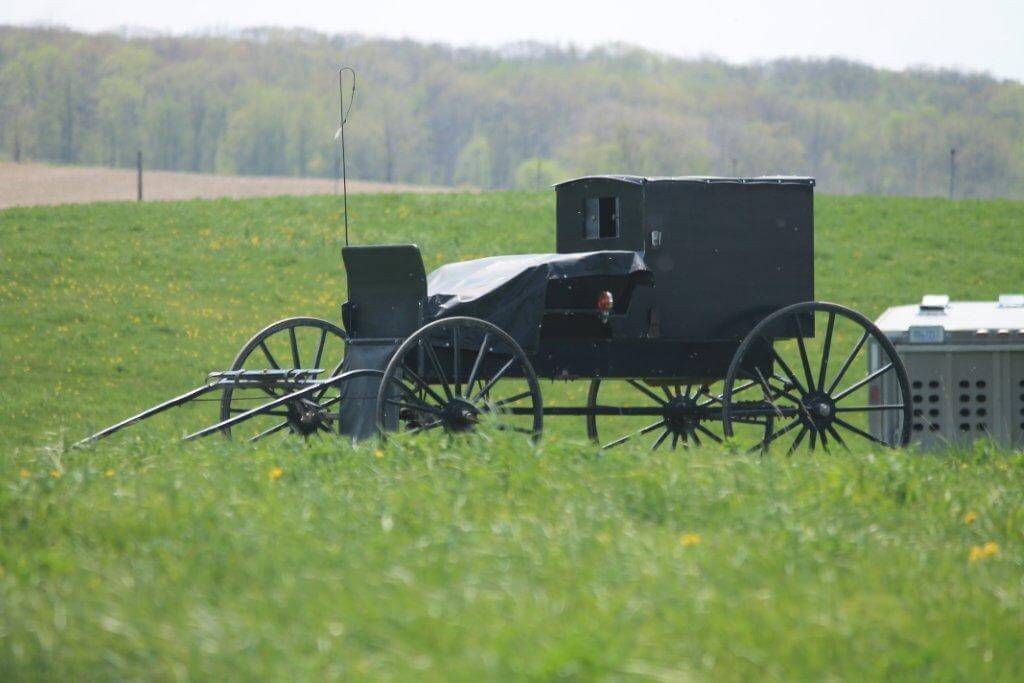 Since it is a county-based census, I was continuously challenged by Amish settlements whose families are located in more than one county and how to divvy up the population. There were 166 multi-county settlements in my study. Essentially, that meant staring at maps for a great many hours.

As I progressed through my county-based census, I also noticed that there were a number of Amish settlements that straddle state borders. Fourteen, altogether! Some are large communities with only a few families spilling over into another state. Others are more evenly divided. Here is the list.

(3) less than a handful of families from the Grabill/New Haven, Indiana community of Allen County live in Defiance County, Ohio;

(4&5) Williams County, Ohio, located in the northwest corner of the Buckeye state, is the location for a couple of families from the Camden, Michigan (Hillsdale County) settlement and nearly 20 families from the Hamilton, Indiana (Steuben County) community;

(7) the population of the Mercer/Davis City settlement is split down the middle between Mercer County, MO and Decatur County, IA;

(8) the Seymour settlement in Wayne County, Iowa spills over into Putnam County, Missouri, contributing a “baker’s dozen” families to the “Show Me” state;

(9) the population of the Grange/Cresco settlement on the Minnesota & Iowa border is almost almost equally divided between the two states;

(10) on the east side of Ohio is the community of Conneaut/Pierpont (Ashtabula County) with nearly 30 of the approximately 145 families living in Crawford County, Pennsylvania;

(11) Trumbull County, Ohio is immediately south of Ashtabula County and plays host to a small settlement that goes by the name of Kinsman, and the town of Kinsman in located in the state of Ohio, nearly two-thirds of the families actually live in Mercer County, Pennsylvania;

(12) the largest settlement, the Greater Lancaster County community, includes slightly over a dozen families who reside in Cecil County, Maryland;

(13) the Meyersdale/Springs settlement of Somerset County, Pennsylvania (one of the oldest of all Amish communities) shares about two dozen families with Garrett County, Maryland; and

(14) Sugar Grove is located in the northern Pennsylvania county of Warren, but about 10 families live in Chautauqua County, New York

Joe Donnermeyer is Professor Emeritus at the School of Environment and Natural Resources, The Ohio State University, and co-editor of the Journal of Plain Anabaptist Communities. Read this free online journal and sign up for future issues here.