The Amish of Rexford, Montana

For people living in the East, Montana is one of those romantic Western states that make you think of big skies and freedom. And that also might explain why the state has attracted some Amish. The first permanent Amish settlers came to the Treasure State in the 1970s. Drawn by the scenery and hunting opportunities, Amish living back East visit Montana fairly frequently. 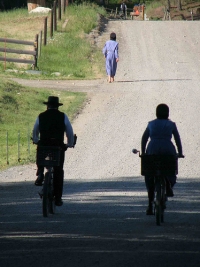 The Montana Amish population has never exploded, yet they maintain a steady foothold, with at least 4 communities there today.  I’ve never visited any Amish settlements in Montana.  However I spent some time with a directory over the weekend containing a number of accounts of Amish life in Big Sky Country, in particular the community at Rexford (Lincoln County).

The community at Rexford is the oldest Amish settlement in Montana.  It lies in an area known as the West Kootenai, part of a region once populated by the Kootenai Indian tribe.  The Canadian border is a stone’s throw away.  The area is remote, rugged, and by all accounts very beautiful.

Here’s more on the Amish community at Rexford (from the Wisconsin, Minnesota, Montana & Colorado Amish Directory: 2006):

Readers familiar with this community have added their own accounts on this site from time to time.  Mary notes that horseback riding is common among Montana Amish, while Primitive Christianity observes that bikes were more common than buggies when he lived in the area.  Rosie visited the Kootenai Store this summer and described the area as a “ghost town”, but “the food is still good”.

I hope I’ll get a chance to visit the Rexford community one day, though I think you have to be pretty determined to get there (it’d be a hard detour stop going from, say PA to Ohio 🙂 ).   If you’re interested, here is some more on Amish in Montana.