Delaware may be our first state, but examining a US map today, it’s easy to overlook.  The average state in America consists of 63 counties; Delaware, with the fewest of all, has just three.

The “one in the middle”, Kent County, is home to the second largest city and state capital, Dover.  Just west of Dover city limits you’ll find Delaware’s only Amish settlement, a community founded nearly a century ago by Amish from a variety of states.

As you might expect for an older settlement, with 9 church districts the Dover Amish community is sizeable.  There are roughly 1,200-1,500 Amish living here in around 250-300 households. 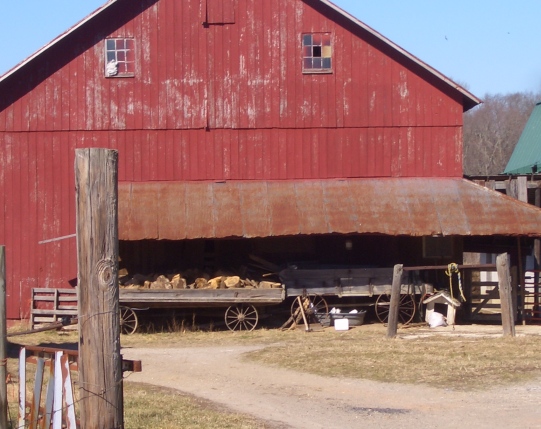 Traditional Amish barns may become a rare sight at Dover

But it might not be that way forever.  In recent years the community has been losing Amish by the buggy load, as they exit for settlements in other states where land is cheaper and roads less crowded (this Virginia Amish settlement is one example).

Like Amish in settlements such as Lancaster County, Pennsylvania, or the Allen County, Indiana community (adjacent to Fort Wayne), the Dover Amish face permanent pressures from living on the edge of a growing city. 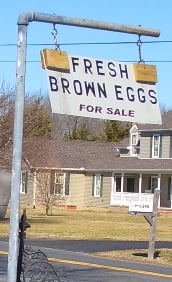 Dover isn’t exactly a huge metropolis, however, with an official population of only about 36,000.

Regardless, Delaware is a densely-populated state, and being right up against the state capital means you’re going to have people wanting to move out of the city and into the more attractive, “quainter” rural areas.

A number of suburban neighborhoods have been constructed in the area, along with a couple of golf courses, including the large Wild Quail residential/golf development.  You also have a large number of rural non-Amish natives scattered among the Amish homes.

The Dover community was founded in 1915 by Amish coming from many different places.  Early settlers arrived in Kent County from Wisconsin, Ohio, North Dakota, Montana, Alabama, Pennsvlvania and other locations.

As noted in the Delaware Amish Directory, “the first eight to ten years were indeed very uncertain for the new settlement, as two of [the first] ten families stayed only a short time”.  However enough chose to remain, and by 1928 the church had grown to the point where it was divided into two districts (Delaware Amish Directory 2005, p. 3) 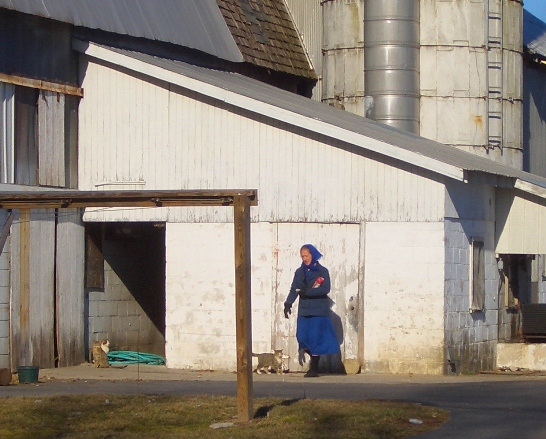 Amish at Dover drive black buggies of a unique style.  Characteristic features include bulky size, rounded sides, and a walk-in back door.  Some liken the Dover carriage to a hearse due to its unusual appearance.  Stephen Scott notes that the open spring wagon is called a “durban” in Dover (see Plain Buggies, p. 68-9).

Dover women wear a prayer covering that is more closely-fitted to the head and with finer pleats than, say the typical Midwest covering.  Dover men customarily begin growing a beard after baptism, but before their first communion (see Why Do They Dress That Way?, Stephen Scott, p. 124-5).

Homes here are mostly painted white in traditional Amish style with a few constructed from brick.  As is typical for most Amish communities, a range of shops are found throughout the community, as well as some farms. 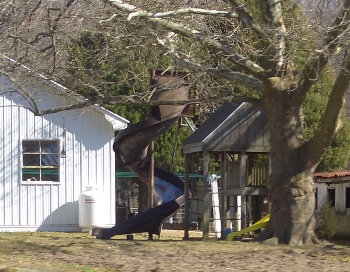 One thing that struck me while on a recent visit: the kids in the Dover settlement make out pretty well.  How do I know?  You see fairly elaborate children’s playsets everywhere, and one of the schools featured the mightiest set of swings I’ve ever seen in an Amish schoolyard.

On my recent visit, I dropped by a few businesses, including a number of dry goods stores.  One of them, Sunny View on Rose Valley School Road, is set up in an old cabinet shop.  You can still see the loading deck outside.  On my visit to Sunny View I talked a bit with the proprietor, whom I’ll call “Emma”.

Emma and I discussed the fact that many Amish had been leaving the area.  In the previous year, she noted that 50 families had left for other Amish communities in 16 different states.

Amish farmland was being purchased for high-end developments, populated by “rich people”–doctors and lawyers, she explained.  The farmers who decided to sell their land “helped it along”.  At one point, according to Emma, they could nearly name their price;  the crash of the economy slowed things down. 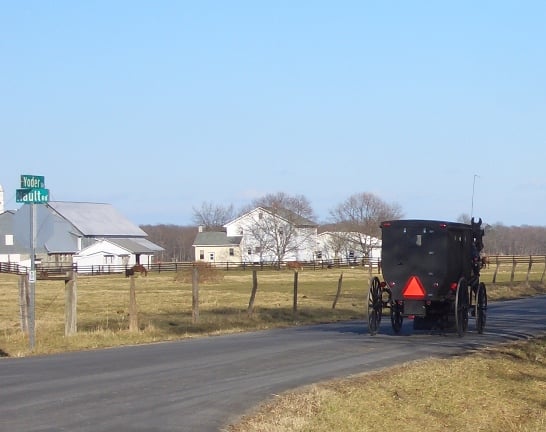 An buggy makes its way down (still) heavily-Amish Yoder road

Traveling through the settlement, you do notice a fair share of “For Sale” signs outside Amish homes, as well as formerly Amish homes that have obviously been converted into English residences.

Though Emma was negative about future prospects, she didn’t foresee the extinction of the community.  “Do you think the Amish will eventually disappear?” I asked.  “No” replied Emma, “though I don’t really know why we stay here.”  She continued: “We don’t really have scenery here…a friend came and said all you have here are houses and cars.”

Still, something keeps Emma and others in place:  “We have been here a long time so I guess we have roots here.”  She noted that it was nearly impossible to build towards the city to the east.  Land is easier to get towards the west, and some Amish construct homes there.  I did notice a number of new homes while traveling through the community.

While at Sunny View I picked up a Delaware Amish church directory.  It was the 2005 edition;  apparently a new one should have been out already, but had been delayed.  Emma promised to send one to my home address when it came in. 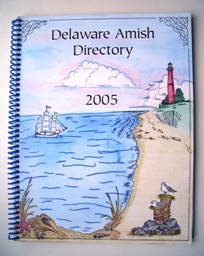 The cheery cover of the Dover Amish directory

I also picked up a Weaver’s Apparel woolie hat, and asked if Emma knew the proprietor, an Ohio Amish friend of mine.  I wasn’t surprised that she did.

Weaver’s is something like my intro when I visit dry goods stores.  Most carry Weaver’s products, and it seems about half the people I ask are familiar with Weaver’s owner, a number having met him in person (he has a bug for traveling and visiting his customers’ stores, and let’s just say he’s a memorable guy).

Emma explained that only about 20 families at Dover are still farming full time; the rest rent out their land to English farmers.  Dover does have quite a few businesses though.  A full listing can be found in the back of the church directory.

This has certainly changed in the interim, but as of 2005, Dover was home to at least 8 cabinet shops, 3 blacksmiths, 3 buggy shops, 11 furniture or woodworking shops (more on Dover Amish furniture), 7 sawmills, 3 greenhouses,  3 post drivers, an appliance store, a quilt shop, a butcher, a number of variety and dry goods stores, a tax service, an auctioneer, a well digger, and one “Windmill Service” (among others).

Despite the out-migration in recent times, Dover remains a sizeable Amish community.  The Dover community is one of a few Amish settlements within easy striking distance of the East Coast.  In fact it is one of the few, if not the only Amish community where a buggy ride to the beach is conceivable (buggyless Pinecraft, Florida doesn’t count!). 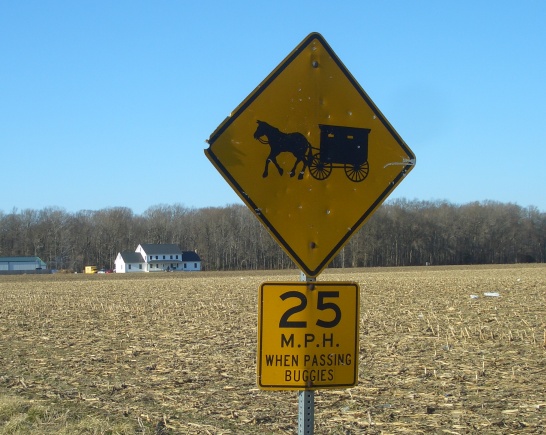 Population pressure won’t disappear though, and Dover Amish may continue to deal with it by entering alternative occupations such as small business and by focusing settlement westwards.  Perhaps the community will even begin to spill across the nearby state line into neighboring Maryland.

Communities related to Dover can be found in many places, including at Marion, Kentucky, Leraysville, Pennsylvania, and numerous others (Plain Buggies, p. 69).  Barring a drastic change, there will likely continue to be an outflow of families from Dover to these communities as well.