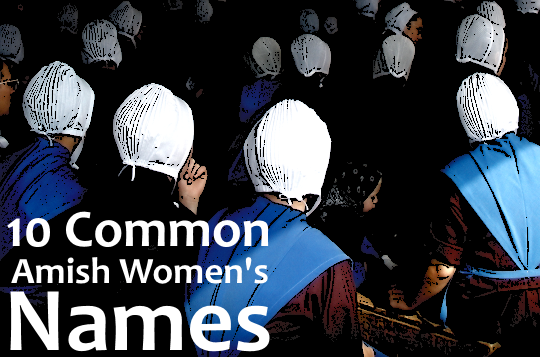 Following up last week’s look at 10 popular Amish male names, we have the female version as promised.

As with the male names list, I’ve included five Biblical-origin names, and five non-Biblical ones, since Amish tap both sources. At the end, I’ve also included 10 uncommon female names.

While last week I mainly relied on Raber’s Almanac to find male first names, that approach wouldn’t work this week. Raber’s Almanac contains a listing of Amish church ministers, who are only males.

So I searched a number of church directories for the female names you see below. I’ve also included background info for most names. Hope you enjoy reading it as much as I did creating it.

Background information on names is taken from A Dictionary of First Names by Patrick Hanks, Kate Hardcastle & Flavia Hodges unless otherwise noted.

Now that we’ve looked at common names, how about the less common ones?

Paging through church directories, I found a nice mix of creative (invented?) names, and obscure ones. I could find a Biblical origin for only one of these, and you’ll see it’s unusual in its own way. Some, like “Rosmanda”, seem to be a combination of two names.

Do you know any Amish ladies with these names–or other unusual ones?

Let us know any other common or obscure Amish female names in the comments.