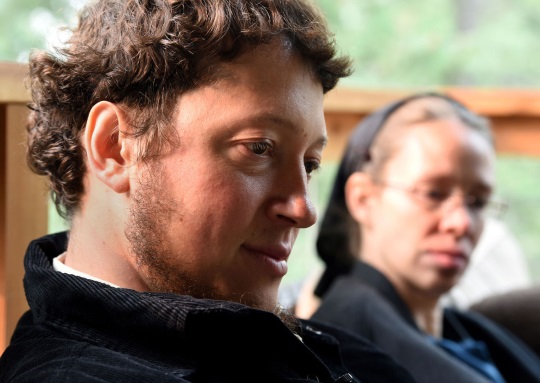 The Missoulian interviewed 34-year-old Amish resident Andy Yoder on the fire and what he expects when his family returns to the site of their former home:

Someday soon — before anyone has a chance to begin cleaning up the charred trees, molten metal and other burned debris — the 34-year-old Amish man will take his family back to its 20-acre parcel that was ravaged last Saturday when the Caribou fire tore through a portion of the state’s oldest Amish community in West Kootenai just west of Eureka.

He knows there will be tears.

But Yoder expects to find something much more important when they gather together in this place that they loved.

“I want to take that opportunity to go there and just cry together and allow this to strengthen our family relationship tremendously,” he said. “Things like this can make us stronger by leaps and bounds like nothing else can.”


The fire which struck the community claimed 40 buildings, among them 11 homes. It is described as “making an unexpected four-and-a-half-mile run over the course of a few hours.”

It was a remarkable display of an uncontrollable force of nature. Those who would know say that fire personnel “can put in an entire career and never see a fire run like it did that day.” 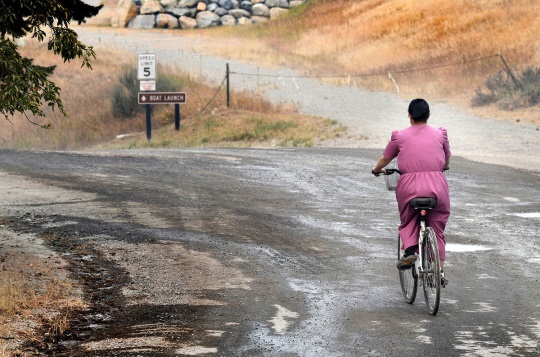 Andy’s dramatic account gives a good idea of the fearsome power of the flames:

The family didn’t have time to pack up and leave. They were placed under a pre-evacuation notice on the night before the fire made its incredible run. The frantic call for a mandatory evacuation came at about 6 p.m. the next day.

Three hours earlier, Yoder said he heard a roar and turned to see a wall of flames about two miles away.

“I just froze in my tracks,” he said. “I knew it was time to do something.”

He loaded up his wife and children into the buggy and pointed the horse down the road. He and his brother followed pulling a trailer filled with some of the family’s belongings. Wearing respirators to protect their lungs from the heavy smoke, the brothers returned to continue setting up sprinklers around the home.

Not long after that, sheriff’s deputies urged the men to flee. They took that advice and left.

“From what I can gather, the fire went through there about 30 minutes later,” Yoder said. “My wife had left already because I heard the roar, but I was told that once the fire hit the flats, it would slow down. That didn’t happen. It was an unpredictable fire.”

This article clarifies initial information which suggested the homes lost were all Amish; in fact only four of the homes were Amish residences. So it sounds like non-Amish West Kootenai residents were hit even harder. 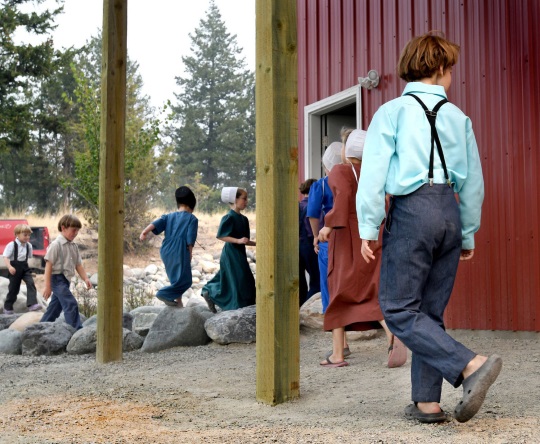 Thankfully there was no loss of life. Yet the damage was shocking:

“It was something that most people don’t ever see in their lifetime,” Yoder said. “Your everything totally flattened, just a heap of metal. There were things there that just had me at awe. The heat and the fire and wind that was involved, you could see the evidence of it.”

Trees totally stripped of their limbs, bark and needles to become a forest of blackened toothpicks. A cargo trailer with its sides completely melted. The 40-foot-by-80-foot shop with an apartment overhead was reduced to a heap of rubble.

“It was like a tornado-like picture that had fire involved,” he said. “Fire consumed every burnable thing there.”

And then, inexplicably, there was the lean-to where he stored his buggy that was left standing.

“How that didn’t burn, I don’t know,” Yoder said. “It was only 40 feet from the main structure. I saw things like that as I drove through the area that had burned. Everything totally flat, everything totally consumed and then here would be a lonely greenhouse and a garden that you could go and pick a tomato in the middle of all of this.”

The Yoders are staying in a vacation home owned by a Canadian family. Andy describes his community as tight-knit, and not just meaning the Amish residents:

“We’re kind of a unique community back there,” Yoder said. “There’s one road back in there and one road back out. Most people know everybody, not just the Amish. We’re helping each other all the time. So this is going to just help strengthen that relationship. Not just amongst the Amish, but through the whole community.”

“Up in West Kootenai, you wave to everyone,” he said. “I feel privileged to be part of a community like that.”

Andy discusses the fire and its aftermath in the video below. “My faith isn’t a question. The faith will help me through this situation. Not only help me, but it will help strengthen my faith.”