News of a wildfire in the vicinity of the Rexford, Montana Amish settlement (West Kootenai) began appearing over the past few days.

Initial reports were that the Amish community was “OK”.

Today brings different news. The Amish have in fact been hit hard – so far losing a total of 40 buildings – 10 homes and 30 outbuildings – to what’s being called the Caribou Fire. 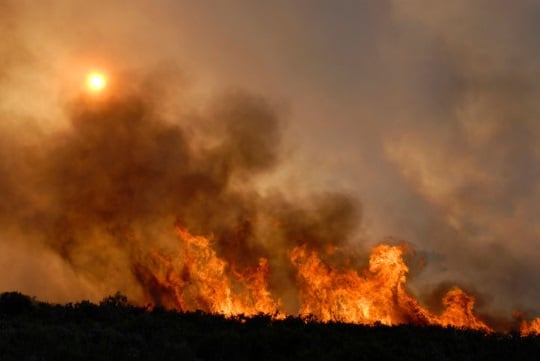 Another report described the fire as “wreak[ing] havoc on Montana’s oldest Amish community”:

The lightning-caused Caribou fire ignited miles to the west and had burned nearly 2,000 acres across the Canadian line by Monday. Firefighters were working Tuesday to establish a line as wide as a football field to protect the remaining structures in West Kootenai.

“It’s still dangerous in there,” said Don Simon, information officer for the Type II management team deployed on the fire.

The concern is that the fire, which struck from the southwest, is circling around the West Kootenai community. It was moving to the southeast on Tuesday afternoon.

“Basically what they’re worried about is if it flanks them and gets trapped in there, they’ll lose that community,” Simon said.

Yoder said the Amish families and their neighbors received pre-evacuation notices from Bowe’s officers Saturday morning. The feeling then was they would have until Sunday to get out.

Darinda Yoder describes her community as being “in shock”:

“We left at 6 (p.m. Saturday), and we were there too long. We should have left earlier. The fire came down so fast they almost didn’t get us out,” Yoder said.

She wishes now she hadn’t been there to see the flames rolling down across the mountain, a terrifying sight when they’re coming straight at you.

“I don’t think it would have affected me the way it is now if I’d not seen the fire,” she said.

Darinda’s comments bring home how ferocious wildfires can be. This one tripled in size over the weekend, to nearly 20,000 acres. 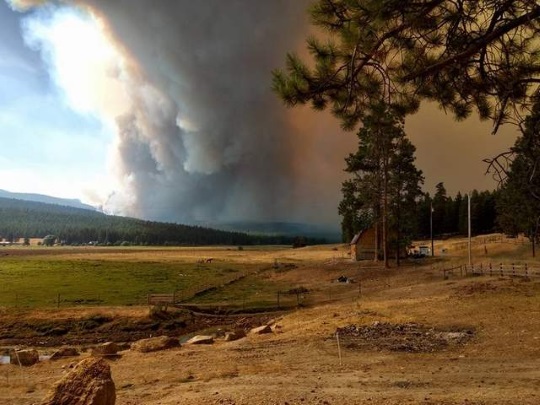 Hopefully the Amish will have something to rebuild when this is over. It sounds like everyone is out safely, at least. Amish evacuees are staying with families in Rexford or camping nearby in RVs.

The fire has been classified as “the number one priority in the nation for resources needed” due to the losses and number of buildings under threat.

Relief Money – For those who wish to contribute to relief funds, Leona Mast shares the following in the comments below:

For those asking how to donate, here is an address to send checks to. 100% of the funds will go to those who have lost homes and for rebuilding purposes. If you want it to be specifically for the Amish put that in the memo as well. Eureka Chamber of Commerce PO Box 186 Eureka, MT 59917 Memo: West Kootenai Fire Relief THere’s also a “GO FUND” account set up under “West Kootenai Fire” where you can make donations. Thanks!

More details – According to this report, a total of 175 fire personnel are fighting the blaze, with an expected containment date of October 30. The strategy is described as “half containment and half suppression”.

The linked article contains reports on three more ongoing Montana fires in addition to this one. The four together cover over 30,000 acres. Wildfires are just a reality of life in the Treasure State.