What’s the difference between New Order and Old Order Amish?

Some may think that the term “New Order” implies something much more modern than “Old Order” when connected to the Amish–perhaps even an Amish group that accepts technology, cars, and modern living.

At the same time, New Order Amish differentiate themselves from Old Order Amish in key ways.

Origins of the New Order Amish

The New Order Amish originate from a pair of movements in Ohio and Pennsylvania in the 1960s.  The key driving factors in the Ohio schism were twofold–one was a belief that controversial practices such as tobacco and alcohol use should be eliminated, and that “clean” courtship should be implemented for youth (as opposed to the practice of bundling found among some Amish).

Secondly, reformist Amish wished to introduce a more evangelical element into the church, concerning personal salvation and mission work.   Amish in this group felt strongly about assurance of salvation, Sunday School, and church  outreach.  The division which occurred in 1966 in Lancaster County shared some similarities with the Ohio division, but was more focused on technology.  New Order Amish are less commonly known as the “Amish Brotherhood”.

Where do New Order Amish live? 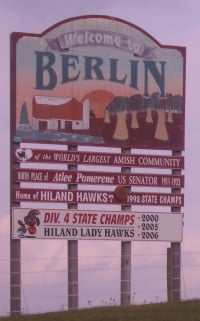 Nearly 20 New Order Amish church districts are found in Holmes County, Ohio, near the towns of Berlin, Sugarcreek, and elsewhere

New Order Amish churches can be found in a number of states, with the largest population centered in Holmes County, Ohiod.  Other New Order communities can be found in approximately a dozen states, including Indiana, Pennsylvania, and North Carolina

New Order Amish are Plain too

Despite what the name might seem to imply, the New Order Amish share many of the same cultural traits as the Old Order.  They drive buggies (albeit ones which may be slightly fancier), wear plain clothing (sometimes with more colorful fabrics and for men, more-neatly trimmed beards and hair), speak Pennsylvania Dutch, and generally do not have public electricity in the home.  New Order homes and barns are similar in appearance to those of Old Order Amish.

New Order Amish may be confused with the Beachy Amish, a group which is theologically similar to the Old Order Amish but which accepts a higher degree of technology, including cars.

New Order Amish may be more accepting of certain technologies such as phones in the home.  Amish researchers Hurst and McConnell note that “the differences in technology use between the Old Order and the New Order are relatively minor” (Paradox, Hurst/McConnell, p.52).  Hurst and McConnell also state that car ownership among Old Order youth is more common, as is cell phone usage among Old Order church members.  Unlike the Old Order, New Order Amish generally do not have any restrictions on air travel, and sometimes use this form of transportation for business or vacation travel.

One theological difference is the belief in assurance of salvation.  Just like other Christians, Amish interpret the idea of salvation differently.  New Order Amish are among those who see evidence for assurance of being saved, as opposed to the more common belief of a “living hope” of salvation seen among most Amish.  There has been some melding of this view with some Old Order districts in Holmes County in particular, and some of the Old Order districts have come to share similar views on this issue.

Another key issue is that of courtship standards for young people.  New Order Amish believe strongly in clean courtship, and as detailed above, this was part of the impetus for the Ohio group to break from the Old Order churches. In recent times, other Amish, including those from the Old Order have been sympathetic to this view as well.  For that matter, “bundling” (the practice of a courting couple lying together, clothed, on a bed) is confined more to the more conservative Amish groups.

Another distinguishing marker is Sunday School.  Most but not all New Order Amish have Sunday school, involving both adults and children, on the “off” Sunday (the alternating Sunday when a given district does not hold church service).

Similarly to an Amish church service, this will take place in a congregant family’s home, and will involve some singing as well as reading, with each member taking turns reading a few passages.  There will also be discussion of the reading, with commentary led by the ministers.  New Order Amish may have songbooks in both English and German, allowing outsiders to participate.  Songs are typically faster and more contemporary than those sung from the Ausbund.  Sunday School is followed by a fellowship meal, like the one that follows church service.

Old Order Amish use this “off” day as a chance to visit relatives or other churches, as well as time for Bible reading and devotions in the home.  However they have generally not seen the need to devote a formal period to Bible study in the form of Sunday School.  Organized Sunday school meetings are another way in which New Order Amish resemble more evangelical strains of Christianity.

New Order Amish may be more open to outsiders

In keeping with their somewhat evangelical bent, New  Order Amish tend to be more open to outsiders.  Old Order Amish of course welcome outsiders into their services as the New Order do, but New Order Amish will be more likely to deliver at least part of the sermon in English.  Some New Order Amish churches, particularly one North Carolina congregation at Yanceyville (now defunct) have attracted a large number of Amish seekers, resulting in a high percentage of members from outside the ethnic body of Amish.

Generally the New Order tends to be more oriented to the world and more accessible to the “seeker” community.  This greater willingness to engage the world is even evident in the publishing sphere.  The most obvious example is Ohio bishop David Kline, who has published two books on nature and sustainable agriculture, as well as a small farming magazine which has a substantial audience among non-Amish.

Statistics show that New Order Amish tend to keep a lower percentage of their children in the faith, somewhere around two-thirds (in comparison to the 80-90% or higher retention rate of other Amish afffiliations).  This may be because of  greater openness to the world through their outreach orientation, and an ideology more closely resembling “higher” churches.  At least partially for this reason, some criticize the New Order Amish as “Beachy Amish without the cars”.

New Order and Old Order Amish are cut from similar cloth and share much in common, including a similar approach to technology, use of horse-and-buggy for travel, and plain dress.  While the New Order Amish may be considered more “progressive” on certain matters of theology, missionary work, and evangelical outlook, and some technology (in some cases), they may be seen as more “conservative” when it comes to issues like courtship, alcohol and tobacco, certain technologies such as the cell phone, and in retaining farming as an occupation, which they do at a slightly higher percentage than members of Old Order churches. 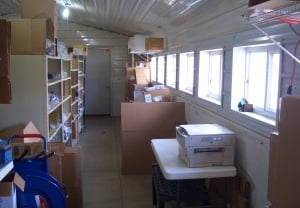 There have been and continue to be substantial disagreements between the two groups.  Old Order Amish may see the New Order as taking a holier-than-thou attitude, and being too forward in their assertions about religion, particularly concerning assurance of salvation.  Hurst and McConnell find that the most common criticism is that New Order churches “are unstable because their young people are more likely to be lost to other Anabaptist churches”.   New Order Amish may find fault with Old Order Amish for being too lenient concerning youth behavior, or too reliant on tradition over spiritual truth.

At the same time, in recent years both sides have begun to see more eye-to-eye on certain issues, particularly in Holmes County, where the two groups live side-by-side and cooperate in many spheres.  Hurst and McConnell note that “a sizable number of Old Order individuals, including church leaders, are quite attracted to the New Order positions on both spirituality and control of the youth.”  There is also a degree of openness to the idea of assurance of salvation among Old Orders.

The Amish have a long history of schism, resulting in groups such as the New Order Amish as well as more conservative affiliations such as the Andy Weaver Amish church and the Swartzentruber Amish.  However, today many Amish seek to play down differences, seeing past church splits as painful parts of their history, while emphasizing common ground.