So I haven’t ever seen a video like this before. In this remarkable recording, Bill Lyons filmed inside a building as it was being moved down the road to a new location by a bunch of Amish men and youth (around 150).

If you’ve been around this site for awhile, you know I like to share the barn and building moves (an Amish specialty). Another case of Amish “handiwork” so to speak. 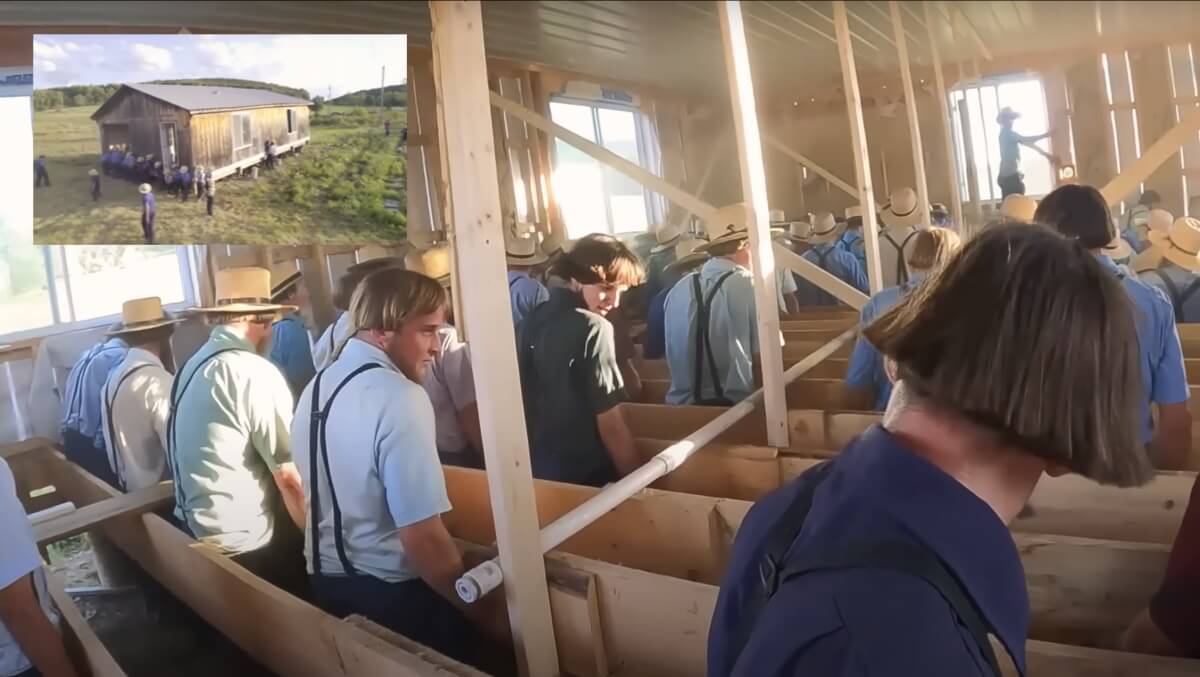 There have been a number of videos showing what’s going on in these moves from an outside viewpoint. This is the only video I’ve seen shot from within the structure as it’s being moved.

What’s great is that he also has an external drone shot in the small screen – so you can follow along with where they are going. 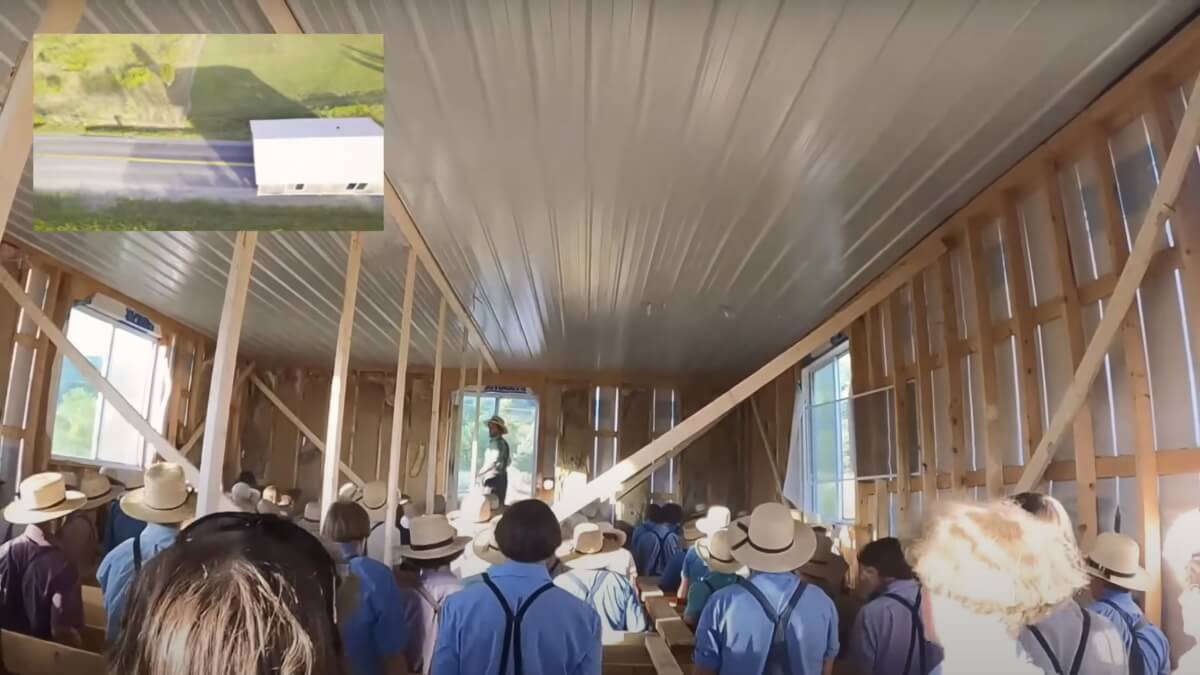 It’s quite long (20+ minutes), but that gives you the whole show, more or less. You’ll see they stop several times and make some adjustments along the way. A move leader rides at the front and hollers instructions to keep everyone on track.

This is a community in Steuben County, New York (Addison). Bill added more details in a comment after the video went viral after he posted it in July. This part tells the story of this move:

To answer some of the comments and give the back story. First off this isn’t a new building. This building was previously used as a tin shop I think it was built around 2015. That family decided to move another part of the country 4 or 5 years ago. This building has been sitting empty ever since. The new owner of the property decided he was going to demolish the building. A neighbor was going to build a new leather harness shop, basically anything involving leather.

He purchased the building, with the intent to move it. Why waste the building when it’s in great shape is what he told me. Also, it was faster to move the building then take it down and rebuild it in the new location, only took 20 minutes to carry it to new location. Think he spent a few by himself making sure the Sonotubes where in the correct spot to set the building down on and adding braces to inside of building to keep the walls from moving while lifting.

A work frolic is not only about getting the work done. And likewise there’s a good bit of joking and enjoyment while the move is going on. At one point somebody shouts out “How many more miles?” to general laughter. 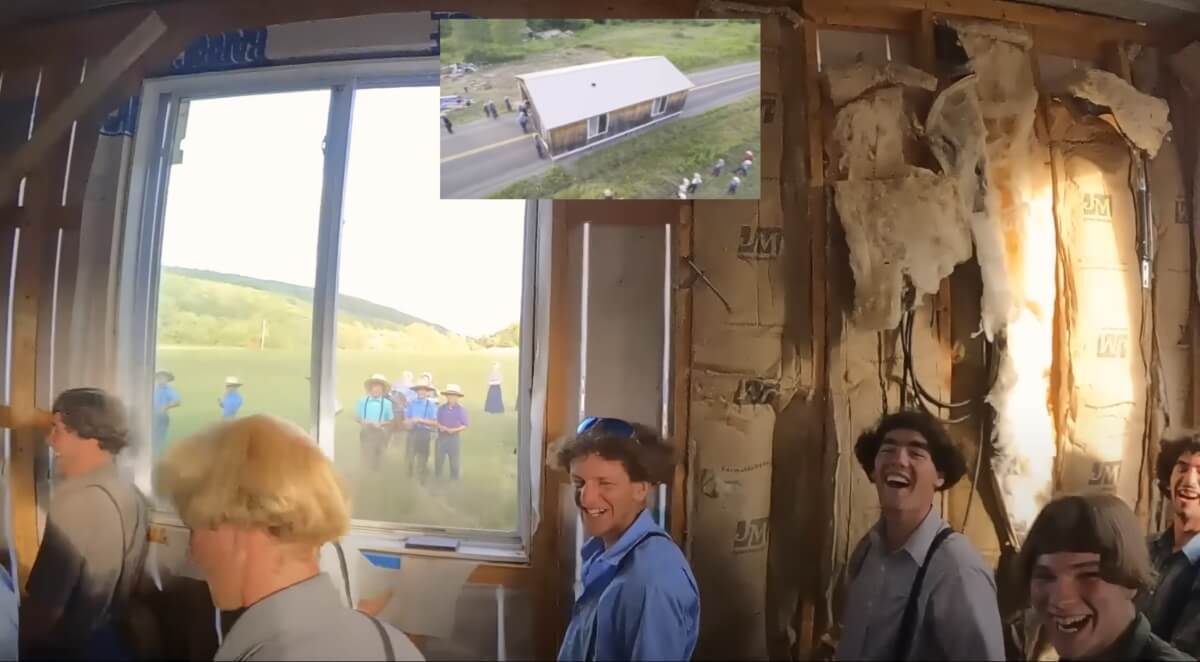 How many people involved, and what kind of weight are we talking about?

We are guessing there are roughly 140-150 people lifting the building. Best guess they were lifting between 50 to 75lbs (22 to 35 kgs), hard to tell walking that distance with a building in your arms. At the end of the video, you can count them leaving the building just haven’t taken the time to count.

Some have asked why not use wheels. Mostly it was because of time. The amount of dirt that would have needed to be moved to get wheels through two ditches, plus the 180 turn at the end with limited space. It had to go down slightly to miss the power lines crossing onto the dirt road. Then the number one reason was you don’t need overweight or over width permits if you just carry it🤷‍♂🤣

That bit at the end about not needing permits is also interesting. Another reason this way to move would especially appeal to Amish. 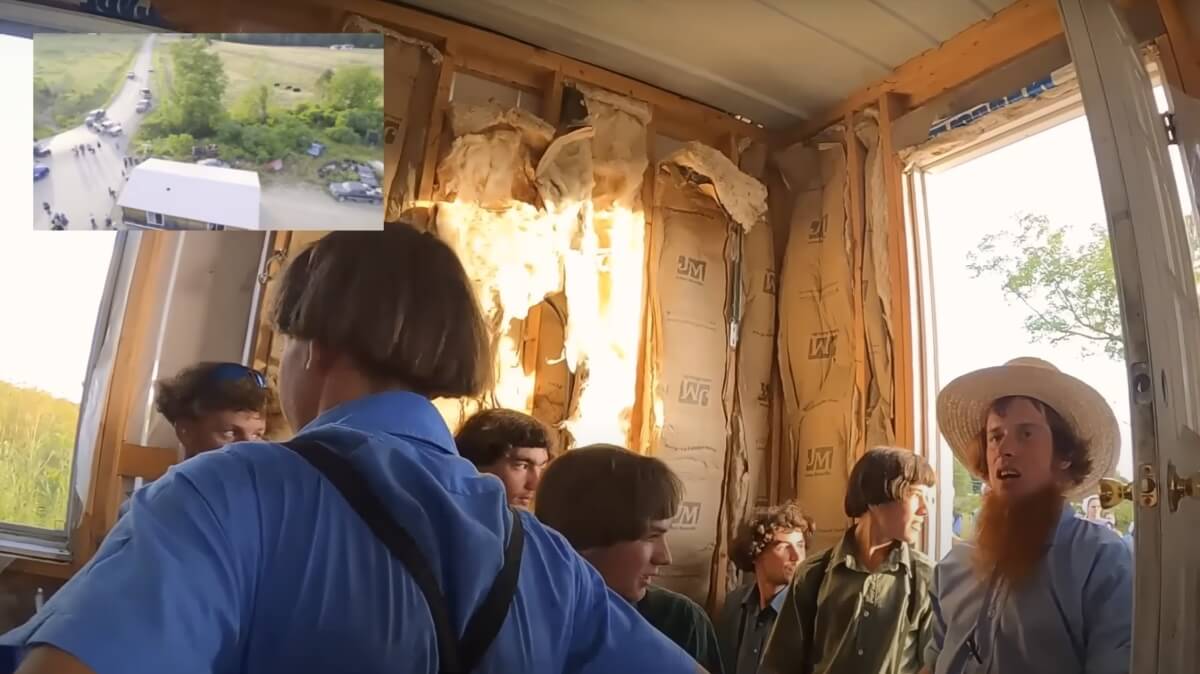 What about permission to film? Bill addresses that too, and points out that the Amish wanted to see it afterwards as well (nothing odd about that). At one point, someone even checks with him to make sure the camera is still going:

Yes, I asked about filming this, they wanted to see it afterwards as well. I have lots of videos with the Amish I should post more, or at least a short of the limo they arrived in.

Total cost of moving it was a lot of coffee, a bunch of sheet pizzas, and a volleyball net to play volleyball afterwards.

Check out the video here. And be sure to check out the last two minutes when, task complete, everyone pours out of the building.