Amish are well-known for living by guidelines and rules governing technology, dress, and other aspects of daily life. But Amish churches are not all the same.

Some are more traditional, and others more progressive. Some do things one way, and others do things another way. So how do Amish know the dos and don’ts specific to their churches? 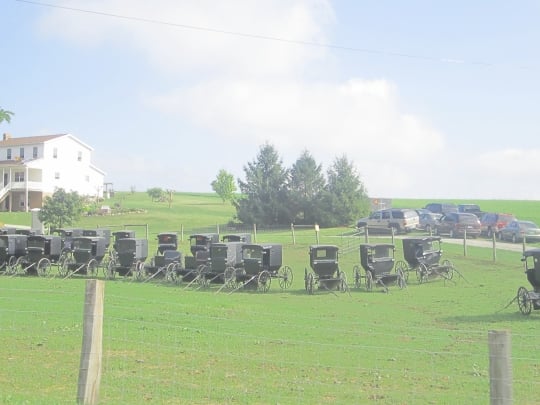 This information is contained in the Ordnung. It’s a living “document” which is reviewed and affirmed by the community twice yearly at the Council service preceding Communion.

The Ordnung will vary, and sometimes drastically, reflecting differences across Amish society from the plainest to the most progressive churches.

For example, some churches will prohibit indoor plumbing, linoleum flooring, and even riding in vehicles. In other Amish churches, interiors resemble non-Amish homes, and members use tractors as de facto vehicles.

I put “document” in quotes above, as the Ordnung is typically unwritten (but not always).

The authors of The Amish Way: Patient Faith in a Perilous World describe the Ordnung as:

typically tak[ing] the form of oral tradition, communicated through lived example.  Amish people know the Ordnung – it’s not ambiguous – but most would be hard pressed to recite all its dos and don’ts. Because the Ordnung deals with the details of daily life, it is “caught” more than it is taught. It is simply absorbed in the course of everyday life. Thus mothers and fathers play a much larger role in transmitting the Ordnung than do bishops and ministers. (p. 55)

On the other hand, one example of a written Ordnung comes from Daviess County, Indiana. It’s referenced in The Amish Way for its detailed description of what materials buggies should be made of, and their overall design.

The Amish of Stevensville, Montana

Another example can be found in a recent article in the Bitterroot Star on the young Stevensville, Montana Amish community.

This currently 10-family settlement was founded several years ago by Amish from the nearby St. Ignatius community, as well as from other states. The main source for the article is Marcus Hostetler, whose family was the first to move to the Stevensville area in 2015.

Hostetler describes his church’s Ordnung document, which is called “Expression of faith and guidelines for the Stevensville Montana Church.”  The article shares several points from the document concerning dress, technology and more.

It turns out the Stevensville community is a pretty materially progressive church. Unlike most Amish, they allow electricity in the home. They also permit word processors without an internet connection, and basic cell phones if necessary for work.

However they are still a plain-dressing, horse-and-buggy Amish group. The St. Ignatius community is a New Order Amish settlement, and I would presume that designation applies here as well.

Here are some selected rules and guidelines from the community’s Ordnung document:

1. General Dress Code – “Not form-fitting. No bright colors such as red, orange, yellow or pink. Clothes to be of plain material. No casual dress in worship services. No hoods or coats or sweatshirts.”

This sounds pretty standard for Amish churches. I think you do see sweatshirts and/or sweater type tops in some of the larger settlements so this point might be a bit more restrictive even (northern Indiana or Holmes County for instance).

Also of note: demonstrating how the Ordnung can change, the community initially had more strict requirements for clothing worn in bridal parties, but now allows more colorful clothing. 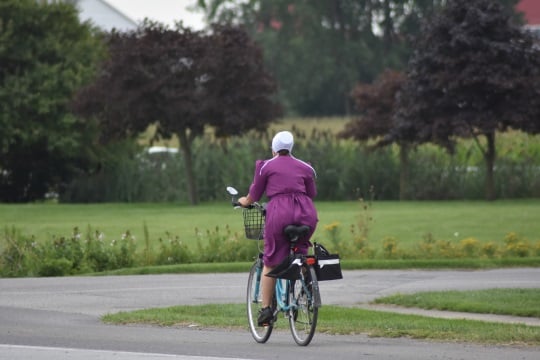 2. Men’s Face & Head – “No parting of hair in front. No shingled hair, no mustache. Hats to be worn. No western, cowboy-style or ten-gallon hats.”

I don’t know how many other Amish Ordnungs would prohibit cowboy or ten-gallon style hats. Maybe that is an issue here, since this is the West, after all.

3. Women’s Clothing – “Clothes must be of plain material, not transparent or form-fitting. Sleeves not too short… Sleeves to be plain or elastic just at the end – no ruffles. No low necklines…. capes or bib aprons are worn.”

4. Children, Work & Technology – “Boys and girls should work at home, if possible, and not be under the influence of modernism, radio, TV, etc. No computers…No auto driving or owning…”

Nothing too surprising there.

5. Recreation – Hunting and fishing are “not prohibited”, however too much of those activities done for sport is “discouraged.”

I would suppose one of the main appeals of living in a Western Amish settlement in such beautiful and expansive natural environs would be the hunting and fishing, two activities favored by Amish across North America.

Maybe given the splendid natural setting, it is a greater temptation in this part of the country. 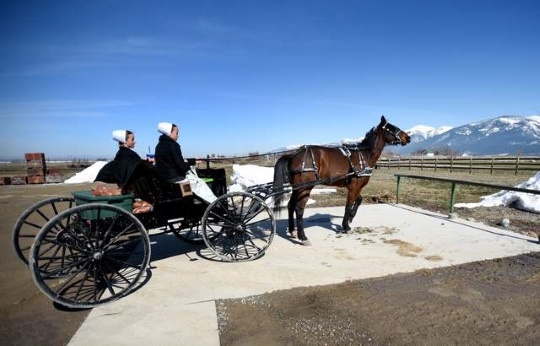 6. Buggies – “Buggies are to be plain with nothing for pride. Have good lights, flashers and emblems as the law requires. No extra loops and rings on harness. Always be courteous when driving on the road. Obey traffic laws.”

Bicycles are also permitted for “necessary travel.” No horse breed is stipulated though Standard Breed is the most preferred type, with some using Morgan or Dutch Harness.

Some rules are of course “more important than others.” More on that:

You might get away with not wearing a hat a few times or talked to about some bright red suspenders, but some infractions are very serious and cannot be tolerated at all, such as divorce. You can only marry once and it’s forever. If one’s spouse should leave the faith, the remaining spouse cannot re-marry. Smoking and drinking alcohol are also prohibited.

It sounds like they’ll be building a church building here, which is the way things are done at St. Ignatius (another unusual aspect, as most Amish worship in the home or other pre-existing structures).

Finally it’s worth noting that “the rules are applied with great ‘patience, humility and admonition’ as it says in the contract.”

One additional bit: If you happen to be in the area, this Friday, February 8th the community is holding a benefit fish fry dinner and auction to raise funds for the community school.

Here are the details:

Dinner starts at 5 p.m. and the auction is scheduled for 7 p.m. It’s an all-you-can-eat dinner of batter fried fish, scalloped potatoes, baked beans, coleslaw, homemade dinner rolls and pie and ice cream for dessert. There is no charge. Donations only.