Ohio Amish bishop David Kline is an interesting person.  I’ve known David for a couple of years and fondly recall my last visit to his Ohio farm, and specifically some warm muffins and warmer companionship at the kitchen table.  David is also unusual as an Amish person in that he is a twice-published author.

David’s descriptions of wildlife, farming, and rural living in Great Possessions and Scratching the Woodchuck make for rejuvenating reading.  His books are informative field manuals, Thoreau-esque musings on nature, and a bit of balm for the displaced country soul.  Here’s an excerpt from David’s first book, Great Possessions: An Amish Farmer’s Journal, titled “October”.

There is something about October that no other month can match.   The brilliant colors of the hardwoods, the crisp morning air spiked with a faint tinge of skunk, the clear skies laced with a few cumulus clouds drifting lazily across it–all these spell October. 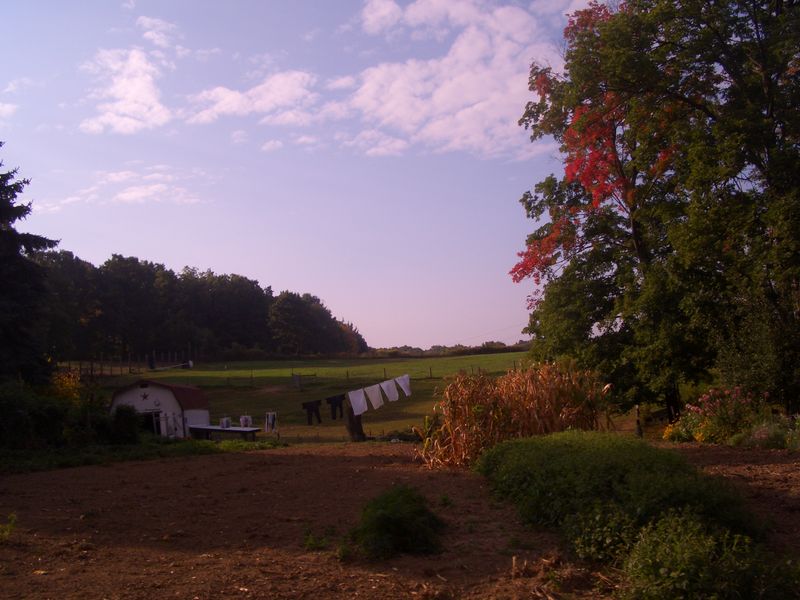 Along with October comes a certain sadness because the spring we so eagerly awaited has passed, and so has the summer;  now we realize that winter is waiting in the wings.  However, this melancholy is soon overwhelmed by the spell of the season as we gather walnuts, hickory nuts, and chestnuts, and hustle to get the corn cribbed.

Though we regret the passing of summer, the time does arrive when we look forward to a killing frost so that we can cease our battles with the lamb’s-quarters, pigweeds, and purslane, and hang up our hoes for the year.  Most gardeners probably reach this point sometime during the fall.  In a few months the new seed catalogs will be arriving in the mail, and our struggles with the weeds will be forgotten.  Resolutions will be made to start the melons earlier, and maybe set out the Siberian tomatoes a week sooner so that we’ll have ripe tomatoes by the fourth of July.

For the small-scale dairy farmer, October is almost perfect.  The cool nights have eliminated the bothersome flies, and the cows, content on legume pastures, have a desire to produce large quantities of milk.

Along about the middle of the month we hear a sound that we’ve been waiting for–the quacking and gabbling of migrating ducks and geese.  Every autumn since 1975 hundreds and often thousands of migrating waterfowl visit our pond, Levi D. Miller’s, and some other ponds in the area, and linger, feeding on waste grain in the picked cornfields until snow and cold weather in late November drive them farther south.  Though primarily mallards, there are also a considerable number of black ducks, American wigeons, and pintails, and a lesser number of blue- and green-winged teal, shovelers, wood ducks, lesser scaups, and coots.

We have often wondered why these thousands of wild ducks, especially the wary black ducks, come to these small farm ponds, as you could say, in the middle of nowhere.

There may be several reasons.  One, the forty-five-hundred acre Killbuck Wildlife Area, the largest inland area of swamp and marshland in Ohio, is only ten miles west of our farm.  This “wasteland” was privately owned until around twelve years ago when the state began buying it.  As the land was purchased, it was opened for public hunting, and then, because of the heavy hunting pressure, the ducks were forced to seek sanctuary elsewhere. 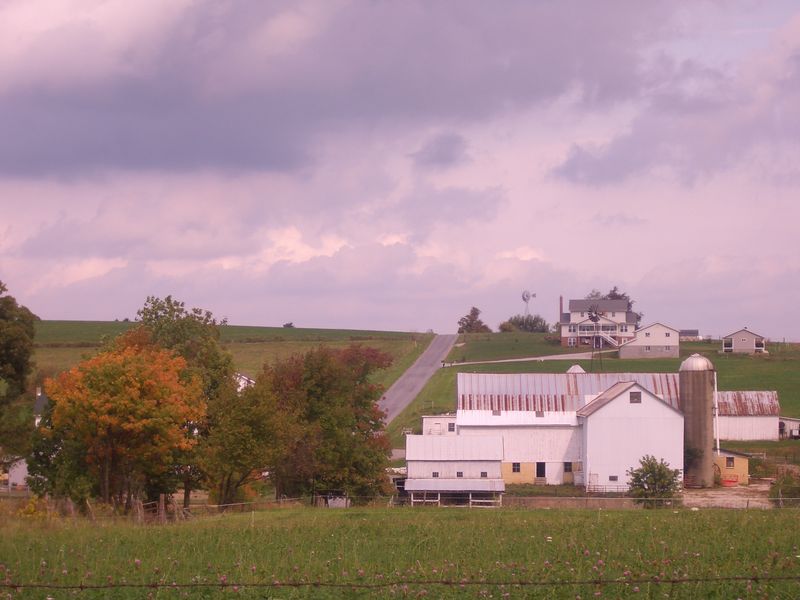 A second reason is that in the early seventies we had some semi-wild mallards on our pond and, after several years of good hatches, we were overstocked.  So a friend and I live-trapped thirty-five and released them in the Killbuck marshes.  A farmer from that area, who was with us when we turned the ducks loose, told me later than many of the ducks were shot soon afterward by poachers.  Could some of these mallards have survived and then, in the following fall, shown their wild kin the way to our farm for food and protection?

The first ducks begin coming in to the pond the day the duck season opens. For some reason they do not stay on the pond at night, except occasionally during a full moon, but prefer to return to the marshes.  They leave the pond about a half hour before dark and return in the morning just after daybreak.  Thus their departure and arrival from the marshes are after and before legal shooting hours.  And to think that some people call them dumb ducks.

We very seldom feed the ducks because we want them to retain their wild ways, and besides, we like to see them fly.  As someone said, “one duck flying is worth ten on the water.”  It is especially exciting to watch the graceful birds come in when there’s a brisk west wind.  Since ducks almost always land into the wind, they set their wings and come in over the house.  To hear the air rush through their pinion feathers is truly thrilling.

The ducks usually reach peak numbers during the third week in November.  After the first significant snow and cold snap, they depart.  Where do they go?  According to John Latecki, a state game protector, most of the band returns from ducks banded in the Killbuck Wildlife Area have been from Arkansas.  So apparently many of the ducks spend the winter months along the lower Mississippi River and in the surrounding wetlands. I’m reminded of the words written by William Cullen Bryant in his poem “To A Waterfowl”:

Thou’rt gone; the abyss of heaven

Hath swallowed up thy form;  yet on my heart

Deeply hath sunk the lesson thou hast given,

And shall not soon depart.

He who from zone to zone

Guides through the boundless sky thy certain flight,

In the long way that I must tread alone

Will lead my steps aright.

Toward the end of October, with the corn harvest in, we have time to walk in the woods, replenish the woodpile, and reflect on the summer’s toils and sweat.  There’s time, too, for giving thanks to the Provider of all things for another bounteous year.