Who are the Andy Weaver Amish?

The Andy Weaver affiliation (or “Dan church”, as it is locally known), originated in the Holmes County, Ohio Amish settlement.  Numbering about thirty church districts in Holmes County, they occupy a place between the Old Order and Swartzentruber churches.

The Andy Weaver Amish affiliation formed in the Holmes County settlement 1952 over the issue of shunning.  Roughly half of the members of a congregation located in the northern half of the settlement disagreed with church leadership’s position on strict application of shunning, and formed a splinter group.  This breakaway group eventually received ministerial assistance from elsewhere in the settlement.

Meanwhile, the remaining half of the church consolidated support for the strong application of shunning among other churches.  Mediation from bishops from outside settlements did little to resolve the conflict.

By the mid-1950s, five districts  found themselves aligned in support of the more conservative position, and took their name from Andy Weaver, an articulate young leader.  The breakaway group was assisted by ministers from other districts and eventually ordained their own ministers, aligning with the majority of the Old Order Amish churches (An Amish Paradox, Hurst/McConnell, pp 43-48).

Though the original reasons for division were only indirectly connected to technology, Andy Weaver are marked today by a more conservative approach to technology than the Old Order Amish.  Amish scholars Hurst and McConnell note that differences in technology usage have increased after differing little in the first thirty years following the church division. 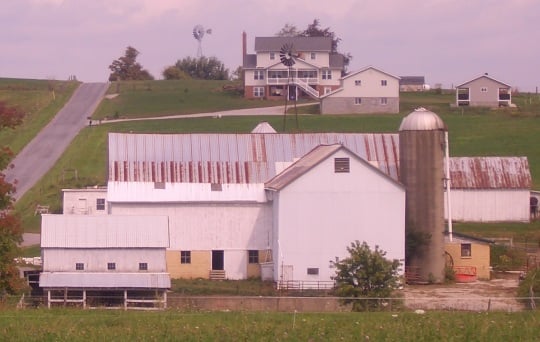 Over the past two decades, “the technological gap between the Old Order and Andy Weavers has widened, as the former adopted milking machines, tractors in the the field, portable generators, hydraulic power, and balers.  Moreover, the Andy Weavers have resisted the adoption of everyday household conveniences such as bicycles, power lawnmowers, garden tillers, and rental freezers”  (Paradox, Hurst/McConnell, p47).

Interestingly, Hurst and McConnell note that the Andy Weaver Amish are in fellowship with the Old Order Amish in Lancaster County, a group which accepts a much higher level of technology, but which shares the Andy Weaver approach to strict shunning.

Andy Weaver Amish are noteworthy in that they exhibit one of the highest rates of retention among Amish, estimated at  97%, versus 86% for Old Order Amish and 60% for New Order Amish.

At the same time, Andy Weaver Amish have left agriculture at higher rates than other Amish, with only 6% active in farming (vs. 10% of Old Order and 15% of New Order Amish), perhaps due to the difficulties of competing with limited dairy technology (Paradox, Hurst/McConnell, p80 and p197).