What’s the difference between Beachy Amish and Old Order Amish?

In A History of the Amish, Amish historian Steven M. Nolt explains that the Beachy Amish movement emerged in the Old Order Amish community on the southern border of Somerset County, Pennsylvania over three decades.  The Old Order community under the leadership of Bishop Moses D. Yoder maintained the position that social shunning should be upheld for members who switched to a more progressive Mennonite church. 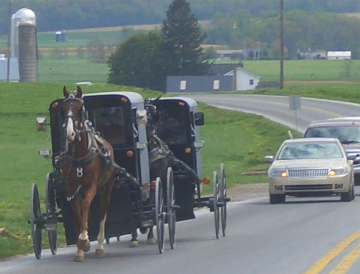 After new bishop Moses M. Beachy took over leadership, the church’s stance on strict shunning slackened, and “Beachy let it be known that he would not excommunicate or shun Old Orders who became Amish Mennonites” (History, Nolt p280).  The progressive segment, comprising most of the community, eventually separated from the Old Order Amish over the issue of strict shunning in 1927.  The Beachy church  soon accepted Sunday schooling and began to adopt electricity in the home, followed by lessening restrictions on technology, such as allowing car ownership.

Later, numerous others, including members of the “Peachey” church in Lancaster County, joined with the Beachy Amish contingent, which expanded across North America over the ensuing decades.

Theologically, Beachy Amish share similarities with Old Order Amish as an Anabaptist church.  Beachy Amish generally adhere to the tenets of the Dordrecht Confession.  Ministers are typically selected similarly to the Old Order method (ie, through use of the lot).  A bishop, two ministers, and a deacon typically lead the Beachy congregation.

However, Beachy Amish differ spiritually from Old Order Amish in that they emphasize doctrines such as assurance of salvation.  They are also typically more mission-oriented than Old Order Amish.   Beachy Amish have founded a number of congregations around the world, including in Europe, Latin America, and Africa.

Beachy Amish also take a more organized approach to Bible study, including Sunday Schools and Bible study groups.  Nearly all Beachy Amish use English rather than German as the language of worship.

Beachy Amish allow a higher level of technology, including electricity in the home, automobiles, and limited use of computers, though they forgo television and radio.  The telephone is also permitted in Beachy Amish homes.