What language do the Amish speak?

Amish speak both English and Pennsylvania German or “Dutch”

Additionally, the so-called “Swiss Amish”, primarily found in Indiana, speak a Swiss dialect which differs from that spoken by the majority of Amish.   This can even cause difficulties in understanding between a Swiss-speaking Amishman and one from a Pennsylvania German language background.

Pennsylvania Dutch is not a written language

Pennsylvania German is generally not a written language.  However, some attempts have been made to transcribe the language to a written form.  Dictionaries have been compiled and some books written in the dialect.

When Amish write letters, they do so largely in English, with some occasional use of German possible.  Amish use English when conversing with non-Amish individuals, and when doing business with outsiders.  Old Order Mennonites speak Pennsylvania German as well, and Amish and Old Order Mennonites will converse in the language.  Amish tend to switch to English when non-Amish enter within earshot, out of respect and to involve the others.

Pennsylvania German is the language of the home.  It is the first language an Amish child learns.  Most Amish children have limited exposure to English before entering first grade.  In Amish schools, instruction is in English, along with some classes in High German.  Some Amish children become quite proficient at English at a young age.  This phenomenon has become more common with the rise of Amish business and greater exposure to the non-Amish world. 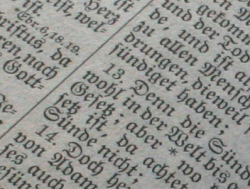 High German is the language of Amish worship

The Pennslvania Dutch dialect is not only a means of communication but also seen as important in a symbolic sense.  Along with Plain clothing and the horse-and-buggy, it is seen as a marker of the Amish and other Plain people, marking them in contrast with the outside world.  Thus the preservation of the Pennsylvania German language is important to the Amish.  In some communities there is concern that Pennsylvania Dutch may be falling out of use in favor of English.

“Group Identity and Language Maintenance: The Survival of Pennsylvania German in Old Order Communities”, Karen Johnson-Weiner, Diachronic Studies on the Languages of the Anabaptists, 1992