Why do the Amish wear Plain clothing?

One of the most easily-recognizable features of the Amish is their Plain clothing.  Amish women are distinguished by long, solid-colored dresses and head-coverings, and men by beards and suspenders.

In “Why Do They Dress That Way?” Stephen Scott writes that “Dress speaks…One group of people’s dress utters volumes about them though they are otherwise quiet and unobtrusive.”  What are the Amish saying by their choice of characteristically simple clothing?

In contrast to modern fashions, Amish clothing reveals little.  Non-Amish may see dark, long-sleeved clothing as uncomfortable.  Yet Amish feel that wearing revealing clothing is un-Christian.  Amish feel that exposing the body to view can promote sinful thoughts and behaviors.  They feel that Christians should stay covered up as a way of honoring the bodies which they have been given by God.

Amish cite numerous Biblical verses for their adherence to Plain clothing, including from the Gospels, Thessalonians, Corinthians, Romans, and Timothy.

Amish base some plain dress standards on Scripture

Key verses include I Timothy 2:2, 10 (“In like manner also that women adorn themselves in modest apparel, with shamefacedness and sobriety; not with braided hair, or gold, or pearls, or costly array, but (which becometh women professing godliness) with good works”) as well as I Peter 3:3, 4 (“…let it not be that outward adorning of plaiting the hair, and of wearing of gold or of putting on of apparel, but let it be the hidden man of the heart, and quiet spirit, which is in the sight of God of great price”).

Amish interpret some of those Biblical mandates to plain dress differently.  Amish women cover their heads as admonished in Scripture.  Some Amish men do not trim their beards, for example, citing Leviticus 19:27, “neither shalt thou mar the corners of the beard.”  Others, however, do maintain short, cropped beards.  The general idea of Plain clothing is accepted by all Old Order Amish as based in Scripture, though its individual manifestations may differ.

Another part of the appeal of Plain clothing is its simplicity and practicality.  Wearing simple clothes reduces the choices that need to be made on a daily basis.  Unadorned clothing  in solid colors is simpler to make and maintain.  While some may see this as removing the spice from life, Amish appreciate the simplicity.  At the same time, small distinctions may be made, as some Amish may choose finer or more attractive fabrics.

Plain dress is not worldly

The Amish feel that as Christians they are bound to be “in the world, but not of the world.”    Worldly clothing is symbolic of worldly ways.  Amish are taught not to love the world, but God’s spiritual kingdom.  The choice of plain clothing marks the Amish choice to reject the world.

By its nature, plain clothing helps promote Christian ideals.  Amish live in countercultural communities as they feel that they are the best means of manifesting Christ’s teachings.  Plain clothing discourages status-seeking through the practice of acquiring and wearing fine clothing.  It diminishes competition and underlines the importance of community over the individual.  It discourages emotions such as envy and jealousy, though Amish recognize that it is impossible to eliminate these from human nature.

Plain clothes clearly distinguish the Amish as a people apart.  Amish plain clothing is distinct, not only in comparison with non-Amish clothing, but when compared with other plain groups such as Old Order Mennonites.  Clothing also varies among Amish groups.  An Amish person is often able to discern an individual’s community from their style of dress.  Thus, plain clothing is an important marker of Amish identity.

Amish-style Plain Clothing is not what Jesus wore

Some make the point that nowhere in the Bible are there admonitions to wear suspenders or solid-colored dresses.  Amish plain clothing evolved over time as a result of a number of factors.  Items of plain clothing became accepted, and were often chosen in reaction to what was seen as popular at the time. Thus, the plain clothing of today came about over time, and is a result of Amish response to influences from the dominant culture, as well as by Amish following Christian beliefs of modesty and humility. 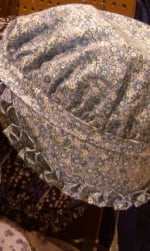 Amish are not the only people who choose to dress Plain.  Conservative and Old Order Mennonites maintain the practice of wearing plain clothing to varying degrees, though styles are distinct from that of the Amish.

Old Order Mennonite dresses may have patterns and checks, and Mennonite men may wear jeans, overalls, and plaid shirts.  The prayer covering is common for women as well.

Why Do They Dress That Way?, Stephen Scott