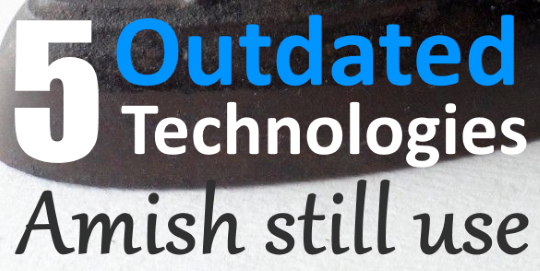 It might sound funny, but you do hear things like that in places like Holmes County, Ohio. That community is a grab-bag of Amish groups–some very restrictive of technology, some liberal.

In fact, many do use certain modern devices, tools, and gadgets. LED lights, recumbent bicycles, solar panels, and high-tech birding binoculars are a few examples.

That noted, Amish certainly do use items the rest of us would consider “obsolete” or “outdated”.

Five Technologies of Yesterday That Amish Use Today

This is basically a hunk of metal with a handle. You heat it up on the stove, attach the handle, then apply it to your wrinkled garments. It works, sort of. I’m sure Amish people are better at operating this than me.

The one time I tried using a sad iron, I singed my hand. That made me sad, momentarily. Maybe that’s how it got its name. 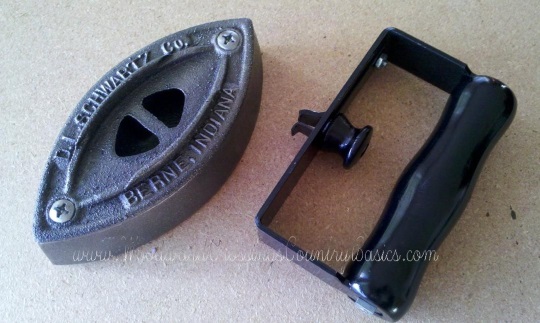 Actually, sad irons earned their moniker due to a now outdated meaning of the word “sad”. In the nineteenth century the term meant “heavy”, “solid” or “compact”.

I think we can agree these are no longer common items of clothing–besides for those high-powered business people and lawyers who for some reason keep wearing them. Nowadays belts, buttons, velcro and drawstrings keep our trousers in place.

Here’s Wikipedia on the creation and passing of what the Amish call galluses: “the modern type were first invented in 1820 by Albert Thurston and were once almost universally worn due to the high cut of mid-nineteenth and early twentieth century trousers, a cut that made a belt impractical.”

By the 1930s a majority of American men were wearing belts rather than suspenders. 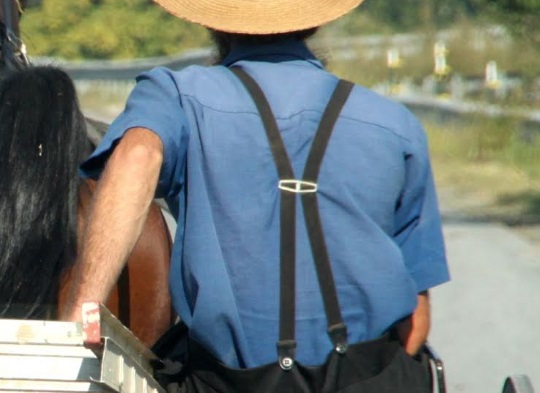 Among the Amish, suspenders are a standard-issue part of the plain uniform. Every male of a certain age wears them (almost).

Something you might not know about the Amish and suspenders: Most Amishmen wear two, but a few wear just one–sort of strung diagonally across one shoulder (don’t ask me why 🙂 ).

And there’s one group which wears no suspenders – the men of the “Nebraska” Amish churches, mainly found in central PA.

Though I’ve often eaten from them, I just learned what these were fairly recently. Made of melamine formaldehyde, Boontonware is a brand name for the once-popular dishes; another is Melmac.

If you find yourself eating in an Amish home there’s a decent chance you’ll be using one of these instead of a dinner plate. 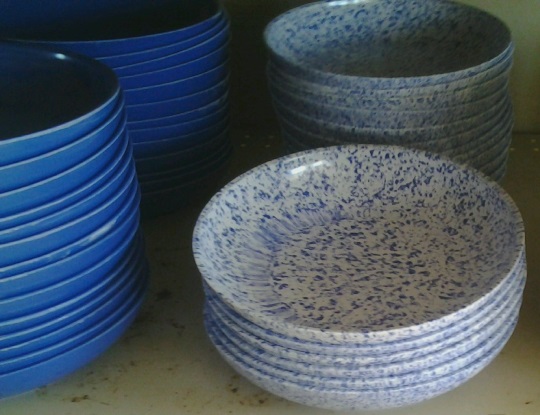 “Blue confetti” is a popular color scheme with the Amish.

The material’s popularity peaked in the 1950s and 60s. It fell out of favor due to a tendency to show stains and scratch marks. As this 2010 New Jersey Star-Ledger article notes, these dishes remain popular in Amish communities.

“The Amish in particular like them because of their simplicity….They are not real fancy and they can be easily replaced”says Jackie Juliano of GMR Technology (owner of the Boontonware brand).

“Many Amish country stores sell Boonton melamine dinnerware, but it’s hard to find the dishes online,” explains one of our readers. Another says the dishes tend to heat up in the microwave (a problem Amish don’t have).

Boontonware was originally made in Boonton, New Jersey, hence the name. Currently made in Ashtabula, Ohio.

The old-fashioned spinning reel mower continues to be used by many Amish. Reel mowers arrived on the scene way back in the 1800s, with the first gas-powered mowers coming along in the 1920s.

You might observe that one Amish church district allows gas-powered mowers, while a nearby district does not. Larger settlements where you’ll see these include parts of northern Indiana and Geauga County, Ohio. 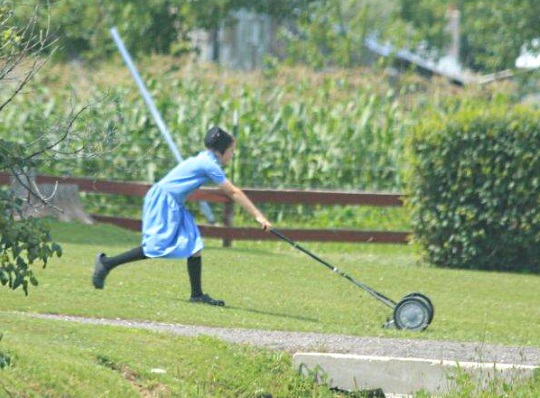 Simple. Classic. And burns a few more calories than a riding mower.

How many Amish use outhouses? You see them at the homes of “lower” (ie, more traditional) groups. They are standard among Swartzentruber Amish.

I had the pleasure of visiting one in Allen County, Indiana. It’s a funny situation where they have both mobile phones and outhouses in the community.

Even one of my Lancaster Amish friends has an outhouse, though like others in that settlement, he also has in-home plumbing. His produce workers use the outhouse, a luxurious-looking model, while on the job.

Amish schools have them as well. 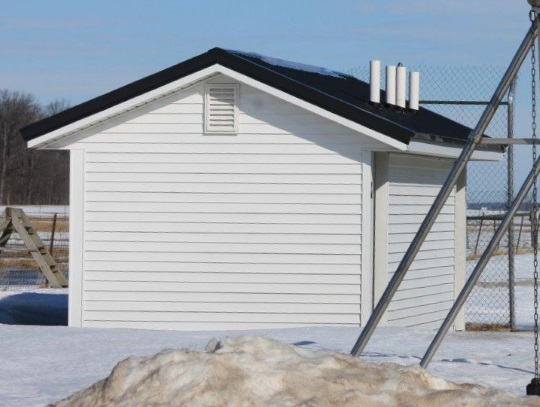 Jerry Eicher, who grew up Amish, describes the outhouse he used for four years as “a place that holds no fond memories for me.”

There’s a funny thing about outhouses. Some non-Amish people seem to have a strange nostalgia for these outdoor toilets. They turn them into lawn displays or use them in outhouse-motif decor like birdhouses.

I’m guessing those folks never had to use one on a regular basis.

What other technologies would you add to this list?