I’ve started to take a crack at your many questions.  There was quite a range of topics which should make things interesting. And I was stumped by a few, so might have to get a little help!  But we’ll put some on the burner and start working through the list.

How do the older people date/marry after a spouse dies ? Or even the younger spouses who may lose a spouse to an accident, etc. ?

Divorce is taboo but Amish do fairly often remarry after a spouse dies.  If you look through an Amish publication like The Diary for instance, you can find a monthly record of marriages, with several second marriages typically listed in each issue (The Diary is a limited publication so wouldn’t include nearly all Amish marriages). 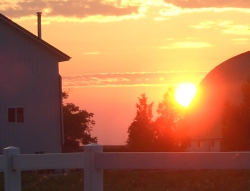 Amish adolescents typically find that special someone via a youth group, with dating occurring in a fairly structured format (Sunday singings and so forth).  On a related tangent, I was recently asked at what age youth start to migrate out of a youth group, ie when do you get “too old” to attend.

I’m not aware that there is an official “cutoff age” in any group, but like with a lot of things Amish it’s hard to say definitively.  I don’t think you’ll see many 30-somethings in youth groups though;  based on singings I’ve attended and what I’ve encountered, I believe that by the mid-to-late 20s people are generally starting to drop off.  Amish marry on average in their early 20s, so once you get past that range you are becoming one of the older youth in the group.

As for how second marriages happen, in their study of Ohio Amish the authors of An Amish Paradox reveal that courtship is typically quite private, sometimes happening by mail, with the couple not even seeing each other during the period of courtship.

“Companion marriage” would happen when two older people get married, for instance a widower with another widow or with an older unmarried woman (there are typically more unmarried women than men in Amish communities).  “Family formation marriage” happens when a widower marries a younger woman still in childbearing years.  You can find all of this on pages 130-1 of An Amish Paradox.

Related to this topic, Lisa Roszler asked when Amish typically get married, which you’ll find an answer to here: When do Amish get married?

And here are some more posts on the Amish marriage topic:

Can Amish get divorced?