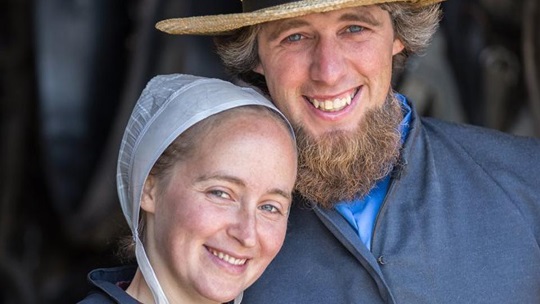 Can you be Amish – and belong to another church at the same time?

Andy and Naomi Weaver believe the answer is yes.

In an article at adventistreview.org, “We are Amish. And we are Seventh-Day Adventists“, Andy and Naomi share their journey from a conservative Amish community at West Salem, Ohio, to the Seventh-day Adventist church:

One day, about five years ago, Andy, who by now had married Naomi and had several kids, met a Seventh-day Adventist who shared some literature with him. After discussing Bible teachings on the end times, the Adventist member encouraged Andy to read the Bible in a language he could understand.

“When I first started reading the Bible,” said Andy, “Naomi was very receptive, and she liked the idea of having a deeper understanding of the Bible.”

Before long, however, the couple understood that following a path of obedience to Bible teachings would get them excommunicated from their community.

“It put me in a hard spot,” said Naomi in an interview recorded a couple of years ago. She felt they would dishonor their parents by keeping the Saturday Sabbath and following all the Bible teachings foreign to their community.

“I knew he was on the right track, but I was way behind,” she said. “I knew that what we were reading made sense, but I didn’t want to lose anybody.”

Naomi shared that eventually, she decided to do “what God wanted [them] to do.” She felt that somehow, God would take care of them.

The couple formally joined the Seventh-day Adventist church in August 2014.

Unsurprisingly, being baptized into another denomination led to troubles with their home Amish church:

Their worst fears, however, came true. When the community found out, they were shunned. They were barred from attending community or family meetings and gatherings.

“The elders forbid everyone to even talk to us,” said Andy. “We were shunned from doing business with the community, and our kids were not allowed to keep attending Amish schools.”

West Salem is part of the Lodi Amish community, a Swartzentruber group which we’ve covered here before (most recently on the remarkable story of Levi Shetler, who has been in 14 separate buggy accidents).

A typical Amish homestead in the Lodi community

It’s a very plain group, so you can understand the response (though truth be told, Amish in more progressive communities would respond similarly – Amish do not recognize membership in multiple churches).

The Weavers want to make it easier for their Anabaptist kin to follow their path:

While during the first few months the Weavers went through financial hardships, they believe that God opened a way for them to make a living. And, as they share, through a series of miracles, a property was provided with a small two-bedroom house on acreage. There they launched the West Salem Mission in June 2015, with the goal of sharing the Bible’s full message with others in the community.

The property house was quickly converted into a small worship center and is currently doubling as a space for the home school group.

“Now we are dreaming of building a new church and a school,” said Andy. “God willing, it will be the first Amish Seventh-day Adventist Church that we know of.”

An Amish Seventh-day Adventist Church. Sounds like a contradiction in terms. This article again brings up the question of whether “Amish” is a religion or a culture, which we’ve explored here before.

It seems that the Weavers, who continue to dress plain, are treating the Amish part of their background as more of a cultural element, as spiritually they have aligned with a different movement.

People who leave the Amish often consider themselves “ex-Amish” or “former Amish“, in other words, no longer Amish. They may say they were “raised Amish”.

There are churches who cater to ex-Amish (or soon-to-be-ex-Amish) people, for example those of the Charity movement based in Lancaster County. 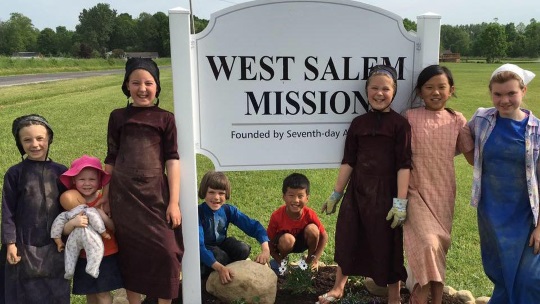 Children of the West Salem Mission

Whether the Weavers manage to keep a foot in both worlds or not, this story reminds me of the richness and diversity of religious belief in North America.

While their home community certainly doesn’t condone being a part of two religious groups simultaneously, the Weavers want to make it work somehow.

Coincidentally, I recently came across a video of Andy and Naomi appearing on a Seventh-day Adventist television program.

They’re a likable pair. In the video, they explain their faith journey and Amish customs.

They share a lot of interesting information, including on how church tensions resolve, why Amish have accents in English, the reason Amish infant boys wear dresses, and how reading the Martyrs Mirror led Andy away from the Amish church: