How do Amish review the unwritten Ordnung?

I am puzzled about how the twice-yearly ‘review’ of the Ordnung takes place if it is not a written document. By ‘not written’ I am wondering if you mean ‘not published’; that is to say it remains ‘in-house’,not something for sale, etc. I am thinking along these lines because a review would require some reference, something to refer to. Or what if there are disputes in interpretation of a rule; is there something to look up to settle these kinds of issues?

It’s been a little while since this question came in, but I wanted to ask someone from an Amish church.  With a little local help I passed this to an Amish friend in northern Indiana.  He responds:

First of all when people think or talk about the Amish Ordnung, rules come to mind but the Ordnung is not rules but guidelines.  I am not aware of any written guidelines on material things. And because guidelines vary greatly even within a community and even more so from state to state and Old Order to New Order.  It would be anything but practical to have actual written guidelines and would very likely cause a lot of disputes. 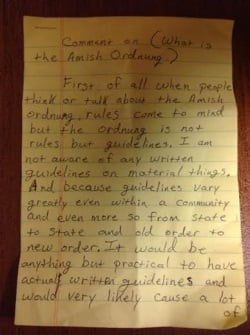 Since the original Amish churches were started around 400 years ago it has generally been progressing towards modernization but usually around 10 to 30 years behind the rest of America.  And basically each new bishop takes over where the retired one left off.  And in the twice yearly reviews he goes over the guidelines from memory, with help from deacon and ministers. When there are disputes (and there definitely are some at times), all on the ministers bench, including bishop and deacon, decide which is the best and most practical way to solve the problem.

To add a little more background, the authors of The Amish describe the Ordnung as an “Oral Map”, regulating “private, public, and ceremonial life by oral tradition rather than by written rules”. They quote an Amish person who says simply, “The people just know it, that’s all”. They observe that “because it is unwritten, it privileges the memory of older people” (The Amish, p. 118; Donald Kraybill, Karen Johnson-Weiner, Steven Nolt).

They also point out two “layers” of the Ordnung: implicit and explicit.  Implicit issues are the ones that are understood by all (eg, use of the horse-and-buggy, or men wearing beards but no mustaches) while the explicit issues are the ones that get discussed, examples being emerging technology or challenges to taboos (The Amish, p. 119). I believe these are the “disputes” which our contributor mentions above.

, authors Steven Nolt and Thomas Meyers bring up an interesting exception to the unwritten Ordnung:

Exceptions to this generalization occur in newer settlements where the population may be made up of migrants from several different communities who carry different understandings of Ordnung.  In such cases, residents sometimes produce a written Ordnung covering certain basic or potentially contentious points to make sure everyone understands the working assumptions that may differ from those that prevailed in their respective settlements of origin. Yet even such a written Ordnung is partial and does not cover every possible application. (Plain Diversity: Amish Cultures and Identities, p. 200, footnote #1 to “Chapter 3: Ordnung”)

The authors cite an early example of such a written Ordnung which came into being in 1871 in Daviess County, Indiana, a few years after that settlement was founded.