Why do the Amish practice shunning?

The Amish practice of shunning, or social avoidance, is often misunderstood

Shunning is a practice fundamental to Amish identity.  Shunning, or Meidung, was one of the reasons Amish Christianity came about, and has been seen as critical to maintaining the integrity of the Amish church.  Shunning is often considered harsh by outsiders, and often misunderstood by non-Amish as well as some Amish themselves.

Social shunning occurs when an individual has violated the Ordnung (guidelines for daily living) and has been excommunicated from the Amish church (also know as being in the Bann).  Shunning is a form of social avoidance.  It is an alteration of behavior towards an individual who has willfully violated rules of the church.

Shunning may take the form of eating separately, not doing business with a person, not accepting gifts or rides from a shunned individual, and generally excluding a person from community activities.  Amish will still converse with an individual in the Bann, and will offer assistance if needed.  But for all intents and purposes, that individual, through his own choice, is considered outside the flock.

Why do Amish practice shunning?

Amish practice shunning as a means of enforcing an individual’s commitment to God, made along with the Amish congregation.  Amish see a Biblical basis for shunning. 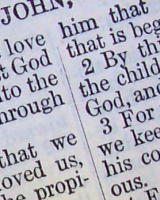 Amish base the practice of shunning on numerous Biblical passages

Passages often cited in support of shunning include Matthew 18; 2 Thessalonians 3:14 (“And if any man obey not our word by this epistle, note that man, and have no company with him, that he may be ashamed”); 1 Timothy 5 (…”Lay hands suddenly on no man, neither be partaker of other men’s sins: keep thyself pure”…); 2 Corinthians 13:10 (“Therefore I write these things being absent, lest being present I should use sharpness, according to the power which the Lord hath given me to edification, and not to destruction”); and numerous others.

Amish practice shunning out of “tough love” in order to get a deviant person to see the error in his ways, change behavior, and re-affirm his commitment to the church.  Without rules and shunning, the integrity of the Amish church would rapidly disintegrate.

One Amishman explains the purpose of shunning:

“Shunning” as practiced today could perhaps be best described as a ritualistic reminder of having gone astray and having broken your commitment to the Lord Jesus and the body of believers you made your commitment and baptismal promise with. Notice I said ‘with’ as opposed to ‘to’.

It is also a statement that the rest of the flock has no intention of leaving the fold and that it takes its commitment to the Lord and each other seriously.  But most of all it is done so the soul of the deviant may be saved on the day of Judgement.

As this Amishman explains, shunning is done out of concern for the deviant member.  Shunning is also done to protect the body of the church.  Shunning in some ways is a fence that keeps the wolves away from the flock.  Amish often point out that an individual can’t sit on the fence.  Were Amish to accept any practice or belief that came along, the body of the church would be in danger of being corrupted and members led astray spiritually.  Membership in the Amish church would be meaningless.

When do Amish employ shunning?

Amish place an individual in the Bann and employ shunning as a last resort.  Typically, church leadership will first visit an individual to discuss the issue at hand, often a violation of the Ordnung, such as use or ownership of a forbidden technology, or otherwise universally recognized sinful behavior.

Use of unsanctioned technology can bring about discipline from the church

The aim is to bring about a change of heart and get the individual to cease his errant behavior.  In some cases, such efforts are effective.  The individual will either make a confession to the bishop, or in front of the church itself, and be placed in a temporary (usually lasting a few weeks, can be as many as 6 weeks) period of excommunication.  After this period, all is restored, and the deviant behavior forgiven and forgotten.

But if an individual deliberately flaunts church rules, refuses to change behavior, to “put away” a forbidden technology, or otherwise continues down a sinful path without regret and attempt to change, the bishop will move to excommunicate him or her (also known as being in the Bann).

Amish researchers Hurst and McConnell note that in the Holmes County community, even those who refuse to confess will receive a “grace period” of six to twelve months during which members attempt to persuade the disobedient member to change behavior.  Later, there is a vote by the members on excommunication, which must be unanimous (An Amish Paradox, Hurst and McConnell).

As alluded to above, excommunication is done as a last resort and with much remorse on the part of the church body.  As the Amishman, himself twice placed in the Bann, explains, “shunning is usually done with great reluctance and only once there is nothing else left to do”.

How long does shunning last?

As described above, Amish may be placed in the Bann temporarily for minor transgressions for which they show remorse and ask forgiveness.  Otherwise, excommunication is for life.

At the same time, the Amish always allow the possibility of return, confession, and reinstatement into the church.  Though this is not too common once an individual leaves, when it does happen, it is cause for much joy in a church.  “Upon repentance the relationship is restored and what is in the past stays in the past,” notes the Amishman.

Different Amish groups take different approaches to shunning.  There remains disagreement among Amish today as to how shunning should be applied, echoing the original issue which led Jakob Amman to break away from the Mennonites and form the Amish branch in the late 17th century. 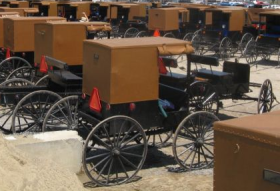 More conservative Amish are among those who follow strict shunning

Some Amish, such as those in Lancaster County, and in more conservative affiliations, follow what is called strong shunning, or streng Meidung.  In this form of shunning, an individual will be subject to Meidung for life, unless he or she returns to an Amish church (in some cases, his original church) and makes a confession.

In the milder form of shunning, practiced by numerous Amish communities in the Midwest, the Bann will be lifted if the individual joins a related Anabaptist-umbrella church, such as a Beachy Amish or more progressive Mennonite church (as often happens with individuals who leave the Amish).

Individual Amish may vary in their approach to shunning as well.  Amish-born scholar John A. Hostetler notes that some Amish dislike the practice of shunning and may only perform  it symbolically.

Hostetler cites an anecdote illustrating such behavior:  “One mother prepared two separate tables, placed them within several inches of each other, and covered both with one large tablecloth.  Each table had separate benches.  The children and the excommunicated ate at one table and the members at the other.  Only the adults knew what had transpired.” (Amish Society, Hostetler)

What other groups practice shunning?

As shunning is a concept with Biblical basis, other groups have practiced it in the past, and some still do today.  The Catholic Church excommunicates members though social avoidance is not practiced.  Other Anabaptist groups, (particularly Plain churches) such as Mennonites and Hutterites, also practice forms of shunning.  Shunning is seen in some other Christian groups including Jehovah’s Witnesses.  There is a history of shunning in Judaism as well, though the practice has largely ceased.

Shunning is controversial and often seen as harsh by outsiders.  One serious criticism of Amish groups is for using internal church discipline to handle infractions that are in fact serious violations of the law.  In 2009 Amish in Missouri drew criticism and faced charges for failing report child abuse in their community.  At the same time, not all Amish would take this approach, and do report actual crimes when they occur. 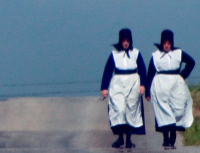 Amish feel that shunning, when applied in a spirit of love, strengthens community

Another criticism is that individuals involved may make the human mistake of taking things too far.  In some cases, Amish bishops may wield church authority in a heavy-handed or overly authoritarian manner.  Some accuse Amish of being overly legalistic in their application of shunning and missing the point of Scripture.

When ministerial authority is exploited, such criticisms can appear justified.  As bishops are subject to human weaknesses, it is true that sometimes church discipline may be taken to an extreme.

Shunning is controversial, yet serves an important purpose

Despite the criticisms, Amish maintain that shunning is meant to be done out of love.  Shunning is a key element upholding the integrity and fabric of Amish life, lending strength to the Amish church and undergirding a strong community based on Christian principles.