Why do Amish only go to school until 8th grade?

Amish schooling may end at 8th grade, but education continues

Amish are well-known for their approach to schooling.  Most Amish children attend school in one- or two-room private schools, and end their formal education at the eighth grade.   Some observers criticize the Amish approach to education, seeing it as a means of restricting the individual.

Amish, however, root their belief in limited formal education in both religious and practical reasons.  Amish education continues beyond the 8th grade in various formal and informal venues.

Why do Amish feel an eight-grade education is sufficient?  There are a number of reasons, one of the most important of which is practicality.  As Amish society emphasizes agriculture as well as craftsmanship-oriented and manual trades, Amish feel that formal school learning can only provide limited value.

Amish education is oriented around factual knowledge and usefulness.  The education on offer at Amish schools can vary, but Amish children typically get a solid grounding in the “three R’s”, as well as some history, geography, German language training, and limited science.

The Amish generally see little value for themselves in abstract subjects taught in many high schools and institutions of higher learning.  Though they recognize that they and the world as a whole need to services of the doctors, bankers, and other professionals colleges and universities produce, they do not see a need within their own culture for such learning, one reason that Amish do not attend high school.

In addition to practical objections to schooling beyond grade eight, Amish also have some religious objections.  Theories such as evolution are objectionable to the Amish, who take a literal view of the Bible and the Creation story.   Though outright religious education is not offered in Amish schools (religious teaching is typically left as a matter for the church and home), Amish also appreciate the fact that prayer and religious songs are allowed in their parochial schools.

The Amish schoolhouse is typically a one-room classroom, sometimes with a basement or with a second room, in some cases divided by a curtain.  The teacher is almost always an Amish female.  Occasionally Amish males teach, or Mennonites in some areas such as Lancaster County, or rarely, non-Amish (“English”) teachers. 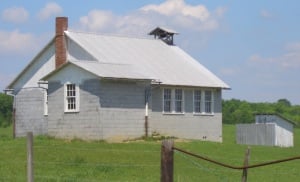 A simple Amish schoolhouse in Ashland County, Ohio. The small structure on the right is an outhouse

The teacher typically handles all eight grades, or sometimes a school may be divided in two, with one class for grades 1-4 and a second for grades 5-8.  The teacher may may have an assistant to help her.  She typically has an eighth grade education herself, with some supplementary courses in some cases.  She is selected for showing good moral character, Christian values, and for having an interest in teaching.

The Amish schoolhouse is typically built on donated land, and contains enough ground for a softball field, as well as (in some cases) playground equipment, and also separate boys’ and girls’ outhouses.  Amish families maintain and pay for the school house.  A school board, typically 3 Amish males, helps to make decisions such as hiring and salaries for teachers.  Parents often visit the school, and each school has a guest book for visitors to sign.

The Amish school day is divided into periods covering the various subjects, and includes lunch and a few recess periods for playing softball.  The teacher will typically check homework at the beginning of a lesson, and other students will work diligently at their desks, with older students sometimes  helping the younger ones.

Some Amish do send their children to public schools, for various reasons.  This is more common in communities such as Holmes County, Ohio, or in northern Indiana.  A few Amish homeschool their children.  Yet the vast majority of Amish in North America send their children to the local one-room schoolhouse, a right which they gained after long years of conflict with the state.

Amish long resisted modernizing trends in American education before gaining the right to limit their children’s formal education.  Objections to a high school education perceived as abstract and unnecessary to an Amish life (detailed above) led Amish to resist state mandates that required education beyond eighth grade.

Beginning in the first half of the 20th century, Amish resisted the trend toward school consolidation, which essentially shut down the small often one room rural schools that once dotted the American landscape, in favor of larger, more distant schools.  The fear was that a more centralized, distant school would be more removed both physically and ideologically from both rural and Amish values. 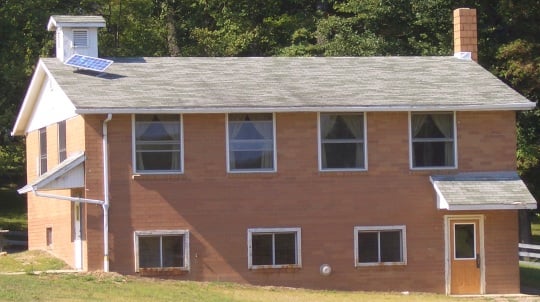 Conflict over this issue emerged as early as the 1930s in Pennsylvania.  Later, conflicts over forced schooling occurred in other states such as Iowa and Kansas.  Eventually, the issue made its way to the Supreme Court of the United States, which in its landmark decision Wisconsin vs. Yoder (1972) granted the Amish and other religious minorities the right to remove their children from schooling after eighth grade for religious reasons.

Despite the emphasis on ending formal schooling at an early age, Amish education continues after the eighth grade.  Amish focus on numerous means of informal learning, such as reading, as well as apprenticeships and mentorships.  Amish youth often learn craftsmanship and business skills by watching older relatives and doing things themselves.  This hands-on approach has helped the Amish be successful in business as well as an effective means of passing on agricultural skills as well. 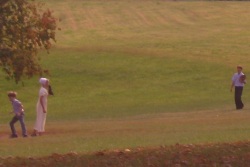 Some Amish, especially businesspeople, may take supplemental courses, such as correspondence classes, or may attend seminars or classes to pick up a particular skill (for example, accounting).  The emphasis is on practicality and usefulness.  Amish do not see education as evil or dangerous per se.  Similar to their approach to technology, they make use of what is necessary of education, and leave behind that which they deem unnecessary or potentially harmful.

Though Amish may end formal education at the eighth grade, that certainly does not mean the end of the road for learning.  Numerous Amish retain a hunger for learning after ending formal schooling, and self-taught historians and “Amish academics” attest to the multiple avenues for education in Amish society.

“Education and Schooling”, Thomas J. Meyers, The Amish and the State, ed. Donald B. Kraybill

“The Amish: Back Roads to Heaven”, documentary film, Burton Buller