Who are the Swiss Amish?

The Swiss Amish are an ethnic sub-group within Amish society

The so-called “Swiss Amish” are not a separate affiliation of Amish.  The term rather refers to Amish who originate from a group of settlers who came to America mainly in the early-to-mid-1800s.  Swiss Amish customs, language, open-top buggies, and last names set them apart from Amish of Pennsylvania German descent.

Swiss Amish began arriving in the Midwest in the 1830s, settling in Adams and Allen Counties in Indiana by the early 1850s.  Most were first-generation immigrants from Switzerland and neighboring areas in Europe, unlike many other Amish moving to the Midwest in the 1800s by way of settlements in Pennsylvania.

Swiss-rooted Amish distinguished themselves in plainness of appearance, a trait that they have retained to varying degrees today.  In Plain Diversity, Steven M. Nolt and Thomas J. Meyers note that their differing roots meant that Swiss Amish had little in common culturally with Pennsylvania German ethnicity Amish, leaving them relatively isolated in Amish society. 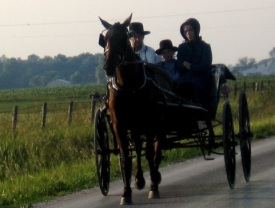 A Swiss Amish family rides in an open-top carriage near Grabill, Indiana

Adams and Allen Counties grew to become the two largest Swiss settlements today.  They have also contributed settlers to other communities, notably to the Daviess County settlement, to which Amish from the Allen County settlement moved in the late 1860s.  Though this community had a “Swiss” heritage in its earlier years, Meyers and Nolt describe numerous changes including the Pennsylvania German dialect displacing the Swiss dialect, as well as adoption of closed-top buggies in 1990.  These and other reasons have led the scholars to describe Daviess County as “Swiss and not-Swiss”.

Swiss Amish are distinct from the majority of Amish, who are referred to as being of “Pennsylvania German” ethnicity.  They may do business together and cooperate on certain issues but typically do not intermarry.

Where do Swiss Amish live?

Today, Swiss Amish are found in over ninety church districts in around 20 settlements.  They populate over a half-dozen states, though the majority are found in Indiana (Plain Diversity, Nolt/Meyers).

The most prominent Swiss Amish communities are at Adams County and in Allen County, in Indiana.  The Adams County community (founded 1850), centered around the towns of Berne, Geneva, and Monroe, is the largest with 47 church districts as of 2008.  The Allen County settlement (founded 1852, 19 church districts), is centered around the town of Grabill and abuts the large urban population of Fort Wayne.

Amish carriages in Indiana are required to display license plates

Allen and Adams counties are distinct from one another in certain ways, though the communities are “back-and-forth” with one another.  The appearance of homes  in Allen County, many of which are constructed of brick, as well as the well-kept carriages, for example, gives the impression that there is more wealth and more of an emphasis on a neat and tidy appearance in this community, compared to the generally plainer dwellings found in Adams County.

These communities also have numerous daughter settlements in states including Michigan, New York, Missouri, and Ohio.

There are a few customs distinct to the Swiss Amish:

However, Nolt and Meyers note that this language is not identical to that spoken in German parts of Switzerland, though it is closer to that dialect than the Pennsylvania German dialect (Plain Diversity, Nolt/Meyers).  They also point out that “most Amish have some difficulty understanding the other dialect”, but that Amish indicate that “Swiss people tend to pick up Pennsylvania Dutch, but Pennsylvania Dutch speakers rarely learn Swiss” (Patchwork, Meyers/Nolt).

Another Swiss Amish identity marker is the practice of yodeling, most commonly seen in the community at Adams County.   Meyers and Nolt note that “the repertoire of yodels includes folksongs such as “Mi Vater ist en Appenzeller” (My Father is from Appenzell), or lyrics wistful for the Alps.” (Patchwork, Meyers/Nolt). 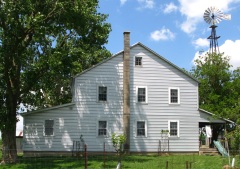 Many Swiss Amish homes have a plain appearance. Near Berne, Indiana

They note that Amish have composed some original yodels but most hail from Europe, with “playful” wording that is not especially religious.  Some yodels are of English origin, such as “I Left My Gal in the Mountain” and “Yodel Sweet Molly”, with secular lyrics and elements of love songs (Plain Diversity, Nolt/Meyers).  Pennsylvania German heritage Amish do not yodel.

Another specifically Swiss practice is that of burying the dead in graves marked only with wooden stakes.  Nolt and Meyers indicate that they include only the initials of the dead.  Over time these headstones wear away, emphasizing the transience of life and insignificance of the individual.

Swiss Amish publish a cemetery guide indicating the location of the deceased, as well as location of lost body parts.  In contrast, Pennsylvania German Amish bury their dead using simple headstones including the full name and dates of birth and death. 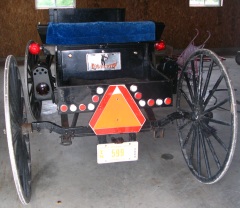 Another custom of the Swiss Amish is the use of open-top buggies.  Though Pennsylvania German Amish will use open carriages, Swiss Amish do not allow closed-top buggies.  Allen County carriages tend to be of a finer appearance, and may include the so-called “kid box”, a small compartment in the back where children can sit to avoid rainy or snowy weather.  Swiss Amish make use of umbrellas to protect themselves from inclement weather conditions.

Swiss Amish tend to be more restrictive in technological matters.  Meyers and Nolt note that they “have tended to stick with traditional power sources such as windmills or small engines rather than adopt hydraulic power or energy from compressed air that has been accepted in many Pennsylvania Dutch districts” (Patchwork, Meyers/Nolt).  Outhouses may be seen in Swiss settlements.

Swiss Amish also have distinct names, many of which are uncommon among other Amish.  These include Schwartz, Wittmer, Lengacher (pronounced “Lon-a-kerr”), and Hilty.  Swiss and Pennsylvania German Amish typically do not intermarry, though Nolt and Meyers note that the community at Milroy, founded in 1970 in central Indiana by Pennsylvania German Amish, has seen a significant influx of Swiss Amish.

Nolt and Meyers further note a strain of Swiss traditionalism that has been seen in everything from their approach to technology, family sizes that have remained large even as other Amish groups’ families have slightly decreased in size, to a history of doctrinal traditionalism that has seen them maintain strict shunning (streng Meidung) even as other neighboring Amish groups have discarded it (Plain Diversity, Nolt/Meyers).

Outside observers, Amish and non-Amish alike, have noted that Swiss Amish tend to be somewhat more difficult to approach and to engage than Amish from the Old Order Pennsylvania German heritage, likely reflecting their traditionalism and history of isolation in Amish society.