Here are the 10 most Amish-populous states, via the Young Center’s 2017 population estimates.

The Ten States With The Largest Amish Populations

The numbers in parentheses are:

1. Pennsylvania (55 settlements; 497 church districts; 74,250 total Amish) – Lancaster County is the best-known and by far the largest community in this state. Other significant settlements are found in the areas of Mifflin County (Big Valley), New Wilmington, Smicksburg, Punxsutawney (Clearfield/Jefferson Counties), and Spartansburg. More on the Amish in PA.


2. Ohio (61; 560; 73,780) – Ohio has the greatest number of individual settlements, and two of the top four largest communities (Holmes County and Geauga County). Ohio is also home to a settlement of Nebraska Amish. Read more.

3. Indiana (23; 380; 53,075) – With only about two dozen communities, Indiana’s Amish have a wide geographic spread, with significant settlements in the northern, central, and southern regions of the state. The Hoosier State is home to two large Swiss Amish communities, as well as two significant settlements founded by Amish from Lancaster County, PA (Parke and Wayne Counties). More on the Amish in Indiana. 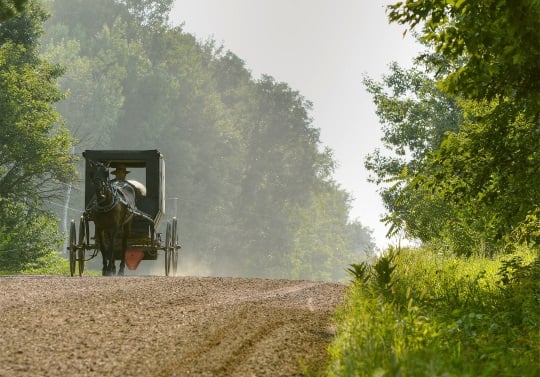 4. Wisconsin (53; 150; 20,095) – Most of the Badger State’s 50-plus Amish spots are found in the western half of the state. Most are relatively small, though significant communities can be found at Cashton, Hillsboro, the area of Kingston & Dalton, Eau Claire County, and Monroe County. More on Wisconsin’s Amish communities.

5. New York (55; 146; 18,575) – Probably the most popular state for founding new settlements in recent years. New York is tied for second in terms of number of communities (55). The largest settlements are in far northern NY in St. Lawrence County (Heuvelton), and the Conewango Valley settlement in western NY. More on the Empire State’s Amish.

6. Michigan (47; 117; 15,040) – Michigan’s largest Amish community, at Centreville (St. Joseph County), is roughly twice as large as its next biggest settlement.  Most Michigan communities are found in the mitten (Lower Peninsula), though a community was founded in 2008 in the Upper Peninsula (Mackinac County). Read more on the Amish of Michigan.

7. Missouri (42; 98; 12,320) – Amish can be found scattered across the Show-Me State. The big communities are at Seymour (Webster County), Clark, and Jamesport (Daviess County). More on Missouri’s Amish settlements. 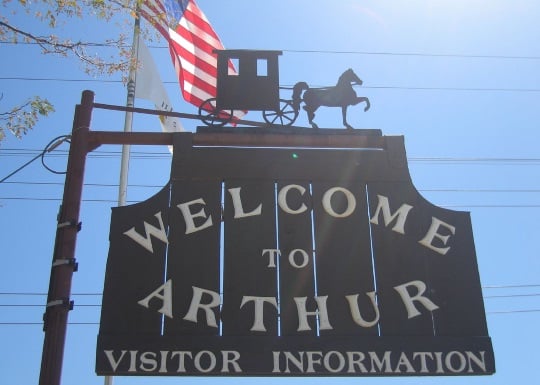 8. Kentucky (42; 91; 12,060) – The Bluegrass State has proven attractive for Amish settlers. Communities can be found throughout Kentucky (with the exception of the eastern Appalachian region). Munfordville is the location of Kentucky’s biggest community. Read more on Amish in KY.

9. Iowa (23; 65; 8,985) – Iowa is known for one of the Midwest’s oldest Amish settlements, at Kalona (founded 1846). Kalona is one of the state’s three largest communities, along with the Bloomfield settlement and the conservative Amish group at Hazleton (Buchanan County). Read more on Amish in Iowa.

Number 11 on this list would not be a state but the province of Ontario, home to an estimated 5,030 Amish.