A 3-Part Look At A New York Amish Settlement

As of 2016, there are over 500 Amish-settled locations in the world. Most of those communities are quite small. For every large settlement like Lancaster County there are dozens of 1- and 2-church district communities. 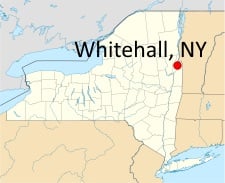 The Glens Falls Post-Star recently published a well-written and researched 3-part look at one of those small settlements, a relatively new Amish outpost in eastern New York.

Amish moved into the Whitehall area–a stone’s throw from the Vermont border–in 2013, from the Fort Plain, NY settlement.

According to the reporting, there are an estimated 200 Amish on 16 farms (a people estimate which feels a little high, but perhaps there is more than one household on some of these properties). 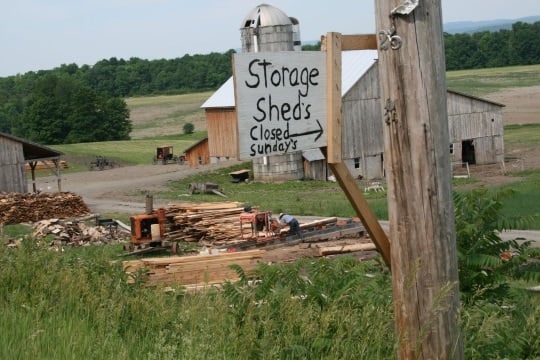 You’ll notice in the photo that the buggy is the distinct brownish hue of Amish in the New Wilmington settlement (see our list of 6 Amish buggy colors). This is one of the more traditional and materially conservative Amish affiliations.

The Amish at Whitehall have been well-received by their English neighbors, with little conflict (this is not always the case, but this series suggests Amish and non-Amish folks are getting along swimmingly).

Part 1 describes how the Amish came to the area and the positive business impact they’ve had.

It gives a feel for life in some of the economically-depressed regions which have been attracting Amish in recent times, due to their typically lower land prices and relative isolation. An excerpt:

Linda Lemnotis, owner of Green Mountain Food Services, said Amish families are regulars in her store. They buy a variety of items for the baked goods they make, as well as food for their families. She said she loves how “honest, courteous and polite” they are and added that she tries to help them out however she can.

She knows they make banana bread a lot, so she offers bargains on bananas when they get a little ripe.

Down the street at Dollar General, Kristy Clemons said Amish families are frequent customers there too.

“There’s a bunch in the store right now,” she said during a recent telephone interview. “They buy mostly baking products, but odds and ends too.”

Are they making a difference in the store’s bottom line?

“Oh definitely,” Clemons said. “They spend $100 to $150 every time they come in and we’ll have three or four families come in at a time,” she said.

The families spend their money throughout the region. Ruth Scribner said she sometimes shops out of town for her Amish neighbors or gives them rides so they can shop for themselves.

The piece looks at other cultural touchstones like physical appearance and educational practices. There is also a section on Amish women. An excerpt:

If you buy items at a stand when both the husband and wife are present, he will likely be the one talking to you.

Despite public appearances, she said the relationship between Amish husbands and wives is a true “partnership.”

“One Amish man told me, ‘I wear the pants in the family, but my wife tells me which ones to put on,’” she said, adding that she has retold that story to Amish residents and gotten lots of laughs.

She said both husband and wife are scripturally obligated to serve each other, and though the men are seen as the speakers and decision-makers, the women are often behind the decisions being made.

Minutes later, he was pulling into the Hatch Hill Road home of one family he buys pies from. A girl, probably 11 or 12 and clad in a traditional Amish dress and cap, approached his truck. He ordered the pie and told her he’d pick it up Friday.

Caza then told about the first time he’d met the girl, saying he stopped to order pies one day and this discussion ensued:

“Well, you know, I can bake too!” she responded, hands on her hips.

Caza said as the youngest of 13 children who grew up relatively poor and living off the land, he can relate to the Amish way of life.

“They all treat me like family,” he said, adding that he has purchased numerous pies and baked goods, a quilt for his wife and a rocking chair from the Amish residents.

This 3-part series on the Whitehall Amish is well worth reading for a look at how Amish and non-Amish interact in small local communities.

Often the Amish are seen as desirable neighbors for both economic and other reasons (witness the recent efforts to recruit Amish to Prince Edward Island), though that is not always the perception.

Whitehall seems to be a good example of a community which has, at least so far, enjoyed positive relations between Amish and non-Amish sides (though some of the reader comments below the article suggest that not all appreciate the Amish in the area).

In addition, there is a heartwarming related story on Caza’s plan to give his 132-year-old broom-making machine to a local blind Amish teen.