Do we romanticize the Amish?

When I first began spending time with the Amish, I felt like I was entering another world.  I would drive my car from gritty Decatur, Illinois, where I was living for the summer while selling books, 45 minutes southeast to the farms, fields and fresh air of Moultrie County.

Crossing into “Amish territory”, it seemed like I passed through an invisible border.  Much of what I encountered on the other side seemed foreign, exotic, inverted, compared to what I was used to in “English” society. 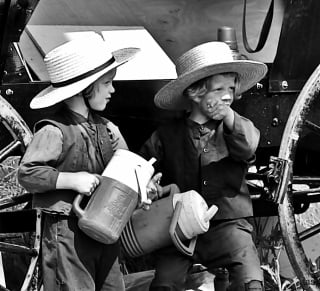 During the first few weeks of my time with the Amish,  I was spending 14 hours a day at Amish homes and farms, and the contrasts with what I was used to in the English world were stark.  It felt great to be among  these people, who really seemed to value the purer and simpler aspects of life.  I am sure I romanticized–or perhaps a better word would be sentimentalize–the Amish when I first met  them.

As time passed, some of the impressions I had changed.  I learned that Amish have problems of their own.  Amish life isn’t always so idyllic–just ask an Amish housewife with a croupy infant and major baking to do on a 90-degree day.  Some Amish I met were downright rude.  Others, in the lifestyle they led, seemed to be further from a Plain life than I’d supposed.

Penn State professor Julia Spicher Kasdorf has commented on the tendency to romanticize the Amish in a recent article on the university website.  “Since the 1970s, an idealized stereotype has emerged,” she explains, “where Amish people are seen as products of a happier time when individuals lived in harmony with one another, the earth, and God.”

“We like to believe that life was simpler, better, safer before we fell into the evils of modernity, and that the Amish haven’t fallen yet”, she adds.

I think she hits the nail on the head here.  Regardless, I still feel there are plenty of positives about Amish life worth pondering and appreciating.  Among others, Christian-rooted concepts of community, humility, and mutual aid.

And of course, the flip side to this question is: “Do we demonize the Amish?”

Spicher Kasdorf notes that not all stereotypes of the Amish are positive.  In the negative column you could put puppy mills, taxes, education, genetic diseases, manure, patriarchy, pacifism…Amish have been criticized over all these issues at different points in their history–and in many cases still are today.

Amish, of course, would prefer to be neither romanticized nor demonized.

Though if you asked an Amishman which of the two is more detrimental, I am not sure what he would say.